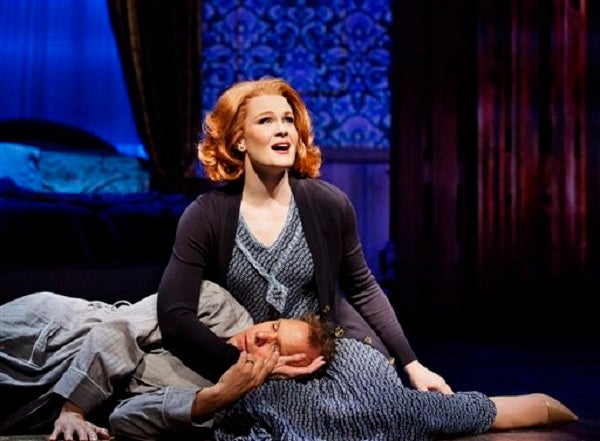 NEW YORK — Kate Baldwin’s dressing room on Broadway may be small but there’s something special about it.

Her window looks out at the last huge lit-up N in the Neil Simon Theatre’s marquee. “I kind of like that. That feels very Broadway to me,” she says happily. The theater itself was built in 1927 and that may explain the littleness of her quarters. “People were smaller then, too,” she jokes.

Little can get Baldwin down these days. Her new musical — “Big Fish” — is about to make a splash on Broadway and she works just a few blocks away from her husband, who performs in “Mamma Mia!” Both are giddily raising their first child, a toddler named Colin.

It’s a touching tale of a son who is about to start his own family and is determined to find the truth behind his father’s epic tales. Baldwin plays the wife and mother stuck in the middle.

Baldwin appeared in the Broadway casts of “The Full Monty,” ”Thoroughly Modern Millie” and “Wonderful Town” before getting noticed in “Finian’s Rainbow,” which earned her a Tony nomination.

She sat down to talk about the show, family life and the crazy thing that happens just before the curtain goes up every Saturday night between the actors in “Big Fish” and the ones across the street in “Jersey Boys.”

AP: This is a musical about a father and son. What’s your role?

Baldwin: I am the peacemaker. I’m the steady center in between these wildly different characters. I’m trying to make sure no one comes crashing down. To me, that’s a lovely thing to play every night.

AP: This is your fifth time on Broadway. Does it get old hat?

Baldwin: It feels special because it’s my first Broadway show as a mother. It changes your world completely.

AP: How is it balancing work and mommy-hood?

Baldwin: My day is spent being a servant to a small person who I love and cherish and will do anything for. And then I come here and I have loads of people who take care of me. I have somebody to put my clothes on for me. I have somebody who does my laundry, somebody who brings me something to drink and change my shoes for me. It used to make me feel uncomfortable to have someone tend to me, now I’m like ‘Bring it on!’

AP: You’ve played mothers quite a lot before. Why?

Baldwin: I’m tall. For the most part, I project a certain maturity onstage. I have a lower speaking voice. I’ve sort of always been cast as older than I am. And in that sense, I’ve played mothers.

AP: Can you now channel motherhood easier because you are one?

Baldwin: Now I really know the nuts-and-bolts of it, don’t I? Now I truly understand it.

AP: Graham Rowat, your husband, is also a stage actor. How did you meet?

Baldwin: The first time I saw him, I walked into the rehearsal room and the director said, ‘Hey everyone, I want you to meet Kate’ and another new actress. Everyone stopped what they were doing except this one guy. He was jumping all over the tables with a riding crop going through the motions of his song. He was 6-foot-4 and he kept poking a riding crop into the ceiling. I thought, ‘Who is that guy?’ That was the zing for me.

AP: At home, do you guys sing to your baby?

AP: Can you tell us a secret that only theater pros would know?

Baldwin: Every Saturday at 7:55 — 5 minutes before places — the ‘Jersey Boys’ go crazy, open all their windows, moon us, shout things, all that kind of stuff. Our guys’ ensemble is two floors above and they do the same thing back. It’s super-fun. I don’t know if anybody on the street notices. I think most people are inside, hopefully.