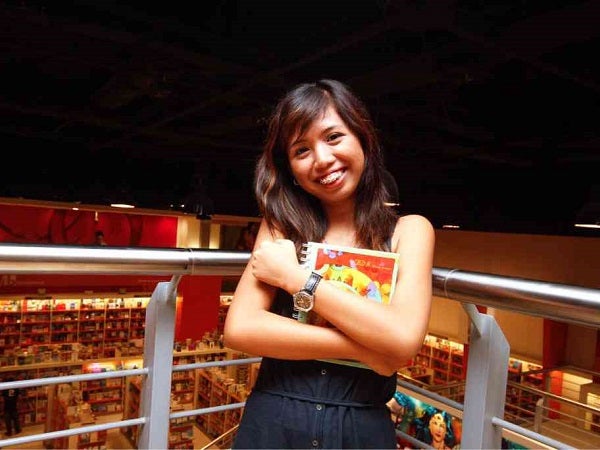 The self-deprecation may be misplaced: Actually, the tiny and giggly 19-year-old has a lot to be proud of.

A story she wrote online became an Internet phenomenon, then a blockbuster book series and will soon be a feature film—a whirlwind process that earned for her gazillions of fans and a financial windfall.

Yet despite all her success, the young author decided to remain anonymous, though she doesn’t mind being photographed. She declines to give her real name, opting to simply use “Denny,” the name many of her fans know her by.

It’s a random choice, derived from a European clothing line, one of many random choices that have turned out to be pleasant surprises for her.

Denny was born in San Pablo City, Laguna, the youngest of three siblings. Her father manages a resort in the Philippines while her mother works in a medical facility for the elderly in the city of Imola in Italy. After finishing high school in San Pablo Colleges in 2010, and on her mother’s petition, she moved to Italy to study.

Back in San Pablo City in 2010, the then 16-year-old found herself bored, and typed something on the online forum for Candy Magazine. That “something” turned out to be the prologue of a much-longer piece. Later, and after eschewing online games, she returned to the forum and found that her piece had received a lot of comments.

In 2011 and already in Italy, Denny discovered the online community of Wattpad (see sidebar) and, using the original piece as a prologue, took less than a year to pen the story of Reah “Eya” Rodriguez, a girl who feels sorry for herself as she struggles with her work, her studies and a budding romance.  It was quite a long story, she says, mainly because she typed whatever came to her during her sit-down writing sessions.

Written in conversational Filipino, the story had the narrative structure of a girl’s diary. It was easier to write on Wattpad, Denny claims, and the added reward was finding a large number of active readers commenting on her work.

The book’s message?  Never lose confidence in yourself.

The writing style is simple and straightforward as well, exactly like how Denny sounds—except she throws in a lot of respectful “po” and “opo” when she talks.

As for her pen name on Wattpad, she chose, randomly again, HaveYouSeenThisGirL.  The title, “Diary ng Panget” was her choice as well.

“DNP” isn’t really based on her life, she says. “I did not work in a restaurant. It’s just the stuff that pops into my head. It’s inspired by a lot of anime because people in anime often have part-time jobs,” she says.

“Those names are random, too.”

Among her influences were “Gakuen Alice,” the anime series she used to watch in her elementary days, and “Hano Yori Dango,” the TV series based on the manga “Boys Over Flowers.”

“DNP” quickly became a Wattpad sensation, logging more than 12 million views.  That’s an astounding number, especially when one considers that conversational Filipino isn’t quite the lingua franca of the young.

The instant Wattpad fame goaded her on and she continued writing on the site, developing a loyal following.

Though she admits to having dreams of writing a book before she turned 30, she didn’t think the dream would unfurl at this time, with this work.  “I really didn’t have any intention or expectation of turning (my online writing) into a book,” she says.

The millions of views didn’t go unnoticed to PSICOM publisher  Arnel Gabriel who  recalls browsing through Wattpad.com and getting snagged by the catchy title “Diary ng Panget.”

“I started with the first chapter and ended up reading season one to the end. I thought that even if only one percent of her 12 million reads would buy the book version, it would still be very feasible.”

But it was also risky; PSICOM had not published any Wattpad properties.

In late 2012, Gabriel wrote the writer to ask if she would be interested in seeing her work as a physical book. Due to a mix-up with e-mail addresses (naturally, she has several) and an inbred caution, it took Denny two months to reply.

“I couldn’t believe it was real,” she says, adding that she felt elated when she found out the offer was real. “Tumitili nga ako sa bahay (I was screaming at home),” she says.

Because “DNP” was so long, PSICOM asked the writer to cut it up into parts, so the story became four separate volumes. The books end as cliffhangers, so readers would have to read the next book to find out what happens next.

“It was Denny’s idea not to edit the book too much and I agreed with her. We tried to maintain what was originally on Wattpad,” Gabriel explains.

It proved to be a good decision. When the first of the four-book series debuted in May, it immediately took off to become No. 1 on National Bookstore’s Best-seller List for Philippine Publications.  When “DNP 2” came out, it too debuted at No. 1 on the list.

All this time, Denny was in Italy. “It’s a little weird,” she admits. She never expected people to buy her book, but readers’ feedback helped her understand why. “They say reading the books relieves their stress and gets rid of bad vibes,” she says.

Gabriel admits “DNP” was a risk that panned out: “No one expected it to be a hit. We were all surprised! The readers have already read the story on Wattpad but they still bought the book.” The first three “DNP” books have sold 140,000 copies combined after going through numerous printings.

In Imola, Italy, Denny is just another student.  The fourth year graphic advertising major is fluent in Italian but speaks limited French.  She still misses her friends in the Philippines, she says, and prefers living in the old country as well.

Her recent trip, funded by PSICOM and timed so she could make several appearances at the Manila International Book Fair (MIBF) last month, was actually her first trip back to the Philippines since she first left for Imola in 2010.  She returned to Italy two days after the MIBF ended.

The Book Fair was a big deal, she says, because she saw the release not only of the fourth and final volume of “DNP,” but also of the two books that comprise her second Wattpad series, “Voiceless,” about a fangirl who winds up working for her pop idol. Then there is “She Died,” a guardian-angel love story volume that began life as another Wattpad story until Denny asked PSICOM to turn it into a manga volume instead.

The books easily sold out, making Denny the best-selling author of seven books before she turned 20.

She has started new projects on Wattpad, but admits feeling some pressure now that “DNP” has become a success. “I feel conscious about the words and the language I’m using,” she says.  Fortunately, her Wattpad fans have proven to be a source of support.

She was mobbed at every signing event.  The turnout at her Trinoma signing (estimated at around 800 people) surprised her so much she almost went home. “I couldn’t believe they were there for me,” Denny says.

At the recent Book Fair, her signing had to be moved to a nearby function room to accommodate the overflow crowd.

Through it all, she jealously guards her real identity. “I used HayeYouSeenThisGirL online to write ‘DNP,’ so if I chose to do a ‘DNP’ book and it was under a different name, readers wouldn’t recognize me.  I want to have privacy,” she says. “I don’t want people looking into my life.”

Along with fame came fortune.  She has earned at least “a hundred thousand pesos”—so far, which is impressive considering the books came out only in May, a mere four months ago. That doesn’t include the sales of her four new books during the Book Fair.  She’s writing all the way to the bank, literally.

That’s not all. Viva Films first called up PSICOM in June, and faster than you can say movie tie-in, Denny had met with the Viva top brass and signed a deal that would translate the entire “DNP” saga into a movie planned for Valentine’s Day 2014.  The movie is in pre-production and so far, she’s met with the writers.

Says Gabriel: “This is our second movie tie-in. (after Ramon Bautista’s “Bakit Hindi Ka Crush Ng Crush Mo?”) I’m proud of Denny. I’m hoping the movie will be a blockbuster.”

Denny has bigger plans ahead. She wants to write a book like “Socrates in Love,” the long, dramatic novel from Japanese author Kyoichi Katayama.

Her style, says Gabriel, “really appeals to the young though older people might find it corny.  We tried not to edit her work too much and it worked.”

Why fiddle with success, he adds. “As I keep telling her, don’t ever, ever change your writing style. Keep your style, your work sells well.” Well, nothing “panget” about that.

The future remains to be written for Denny. She’s not really sure what she’s going to do after graduation, nor if she would stay in Italy or come home. She’d like to do something related to her course, and to keep writing.

“If I treat writing like work, it’ll change for me,” Denny says.

And who would want to change the story of an ordinary girl who found fame and fortune without meaning to? You can’t make this stuff up.

“Sometimes I can’t believe it because this was just something I did to relax and now look where it’s all headed. Happy na ako,” she says. •