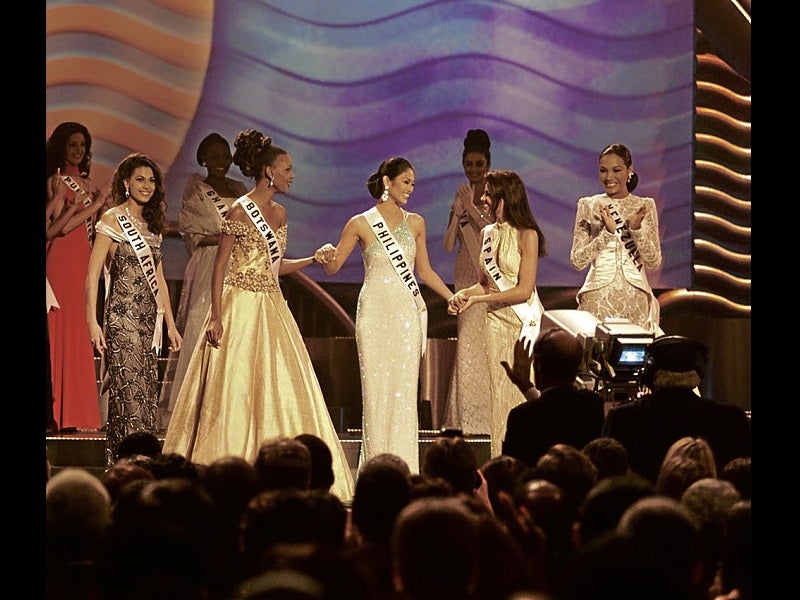 Welcome back, Thank You Girls 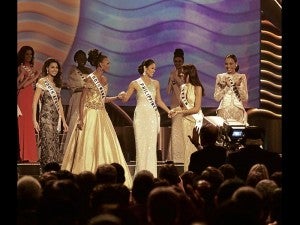 When it comes to their beauty queens, Filipinos are a strange lot. They won’t think twice of throwing their support for homegrown beauties on the global stage, spending hours on end voting online and weighing in on “beaucon” forums, just to ensure their victory.

But once these ladies make a major, major booboo, just like what Venus Raj unwittingly did last year, trust the Pinoy to speak his mind out, analyze the moment to death and even turn it into a national joke.

As of this writing, Shamcey Supsup, the country’s current bet for Miss Universe, is leading in two online polls, one of which is crucial (and official) enough to ensure her a spot as one of 15 semifinalists.

Based on unscientific estimates, four out of five Miss Philippines candidates who landed a spot in the semis eventually made it to the finals. But should Shamcey fail to break into the elite circle, she would be in good company.

Philippine “beaucon” history, as far as Miss U is concerned, is littered with “Thank You Girls” (gayspeak for losers) that have kept aficionados scratching their heads for decades every time they’re reminded of why these “deserving” women didn’t even make it to the first cut. In some cases, it was enough to make them cry out in collective indignation: “We wuz robbed!”

Their memories go as far back to such losers as Vida Doria (’71), who won Miss Photogenic when photographers and not fans determined its outcome, to more recent also-rans like Abbygale Arenas (’97) and Nina Ricci Alagao (’00). “Vida was voted the coveted title of Miss Photogenic during her time,” said fashion designer Noel Crisostomo, as if to emphasize how crucial such a pre-pageant feat was. “Since Gloria Diaz just won two years before, perhaps organizers weren’t ready to see another Filipina winning the pageant.”

Fellow fashion designer Luis de los Santos agrees: “Vida was very classy and beautiful, in a Filipina way. And when she spoke, you knew she had breeding. It’s the kind of demeanor judges back then looked for.”

While Miss U sprung a number of pleasant surprises like Desiree Verdadero (’84) and Miriam Quiambao (’99), a last-minute replacement, it also produced its share of hand-wringing disappointments.

“Nina Ricci was heavily favored to make it on pageant night,” says Crisostomo. “In fact, she was being pitted against India’s Lara Dutta, who eventually won the crown. Nina Ricci was on top on both betting sites and online forums. What happened?”

Again, Crisostomo blames bad styling and a blah gown that ultimately sabotaged Nina Ricci’s chances. In a field of equally beautiful, intelligent women, it’s important to shine in the gown portion, like what Desiree and Chat Silayan (’80) did, to help the candidate break away from the pack.

“Had Nina Ricci won, it would have been a perfect decade opener after Miriam’s near-victory the year before,” says Crisostomo. 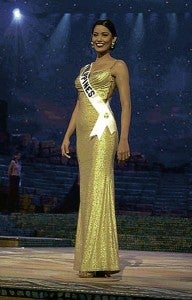 To add insult to injury, says De los Santos, the two female American anchors that year even echoed the sentiments of not a few Pinoys. After all, Nina Ricci was receiving “tons” of fan mail weeks before the contest, said one of the anchors, so why the shutout?

“She’s tall with perfect curves, dusky and a UP graduate,” he says. “She’s not a newbie in modeling either. What more could you ask for?”

Then there’s the pair of Abbygale and Gem Padilla (’90) who would have made it had there been enough slots. When Miss U began in the ’50s, organizers picked the top 15. During the ’70s, the number was reduced to 12.

But starting in 1984, the year Desiree made a splash, organizers limited it to the top 10. Since “computers” were all the rage back then, they also started revealing each woman’s average preliminary scores.

Declining viewership probably made organizers switch back to the top 15 early in the new millennium. Now, contestants’ individual scores are still flashed onscreen, but averages and rankings are no longer shown.

Although Miss U didn’t emphasize that Arenas and Padilla landed 11th and 12th, respectively, many enterprising Pinoys (that’s how devoted they were), took note of their average scores and compared them with the lowest average scores of those who made it to the semifinals.

“Abbygale was statuesque and had that big Miss U smile,” says Crisostomo. “I remember the camera kept focusing on her as the semifinalists were being called. Had she made it, she could have easily breezed through the finals. Again, I think her gown ruined it for her. It was too matronly.”

As for Gem, says De los Santos, she was under the wings of former “beaucon” Pygmalion Renee Salud. A full-time designer then, Salud was responsible for discovering and honing the likes of Chat, Desiree and former Miss International Melanie Marquez.

“Gem was a ramp model trained by Renee himself,” adds De los Santos. “She knew her angles and had great curves. Too bad she landed 12 in a field limited to just 10.”

Makeup artist Rey Legarda shares the same sentiments. Legarda also feels that Gem, Abbygale and Nina Ricci didn’t get what was due them.

“Abbygale had a striking resemblance to Linda Evangelista, who was still quite hot that time,” says Legarda. “And she was Miss Photogenic that year.”

“If they only had voting for a semifinalist slot like they have now for Shamcey,” says Ravanera, “I’m sure Aileen would have made it. She was very queenly, very regal that year.”

“There’s something about Aileen’s face that I like,” adds Legarda. “Hers is a very pleasant face that grows on you the more you look at her.”

When it comes to faces, perhaps no one from among our respondents is more knowledgeable about the subject than Legarda. Like Ravanera, he also thinks Dindi Gallardo (’93) was a strong bet. 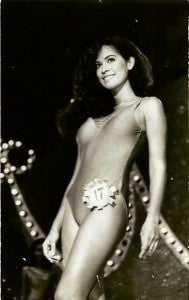 Then there’s also the curious case of Joyce Ann Burton (’85), another Salud protégée and a “veteran” beauty queen. She first represented the country in the now-defunct Miss Young International pageant in Japan before joining Miss U several years later.

Due allegedly to her questionable citizenship (Joyce, whose dad is American, reportedly failed to produce a Philippine passport during the contest), Miss U organizers allowed her to grace the show and enjoy herself, but not to compete.

It was never confirmed, but the fact that Joyce had no score during the taped swimsuit segment seems to bolster this speculation.

“She had the height, the face and the smile,” says Crisostomo. “She spoke English well and had presence and a killer body. In short, Joyce had a shot.”

De los Santos also thought that Joyce’s “good mix” was the country’s answer to Latinas, who were then beginning to dominate Miss U.

“She joined a year after Desiree nearly made it,” adds De los Santos. “All eyes were on us, but sad to say, fate had other plans.”

From then on, Bb. Pilipinas Charities, the organization responsible for sending local beauty queens to Miss U, among other global beauty tilts, made it a must for all winners to have Philippine passports.

Still, such a ruling didn’t stop the likes of foreign passport holders such as Anjanette Abayari, Tisha Silang and Janelle Bautista from joining and winning in their respective local contests. All of them were eventually dethroned and replaced as soon as the anomaly was discovered.

De los Santos also rooted for Joanne Quintas (’95), a strong candidate, he says, during a year of slim pickings, and the “focused” Maricar Balagtas (’04), while Ravanera is for such seemingly unconventional choices as Sarah Jane Paez (’89), Lizbeth de Padua (’76) and, surprise, surprise, Maria Isabel Lopez (’82).

Ravanera loves Lizbeth’s perfect curves, fabulous skin, expressive eyes and a prominent jaw line reminiscent of past Miss U winners. As for the controversial Maria Isabel, Ravanera also admires her for her intelligence as well as her nonchalant, street-smart ways.

“Had Donald Trump produced the show back then, I wonder if he would not be drawn to Maria Isabel, who, like him, was an equally controversial figure,” she says. “She may not be prim and proper, but she was very intelligent and outspoken.”

Before closing, let me add to the list two of my all-time favorites: Dang Cecilio (’79); and Perfida Limpin (’88).

There was perhaps no way anyone could have beaten Venezuela’s Maritza Sayalero in Australia that year, but if organizers were looking for the “perfect” Asian, Dang—with her winsome smile, flawless skin and great figure—was it. No Asian was strong enough to make it to semifinals that year.

As for Perfida, a protégé of the late Louie Mamengo, who also groomed semifinalist Pebbles Asis (’87) the year before, she was the template of the classic Pinay beauty—tall, dusky and blessed with a pretty face, broad shoulders and to-die-for figure.

It was her misfortune to be sent to the right contest in the wrong year, which, ironically enough, was dominated by Asians. Alas, the Asians the judges favored then were the fairer, doe-eyed variety as opposed to Perfida’s dark Malay looks.

So, are Shamcey’s chances assured come Tuesday morning on the strength of Filipinos’ “solid” and legendary support through on-line voting? Don’t bet on it.

If Misses Thailand and Venezuela’s surge in the number of viewers of their respective Miss U videos is any indication, Miss Philippines is no shoo-in for the bonus spot.

If we could marshal and campaign for votes, so could they. At the end of the day, it pays more for a contestant in any beauty contest to compete purely on her own merits.