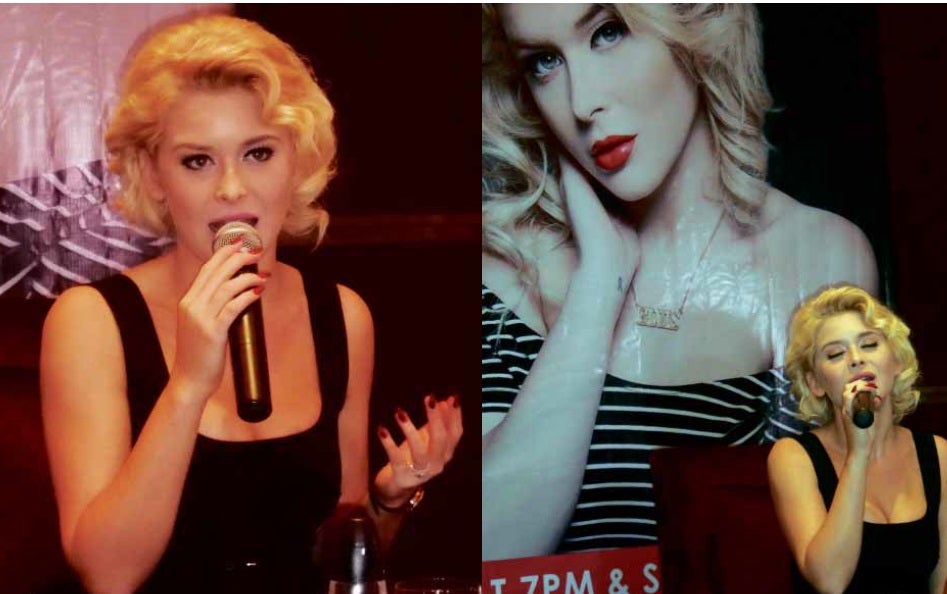 SHE GETS another taste of the famed musical abilities of Filipino artists.

US singer Renée Olstead vows to return after Makati gig

As far as send-offs go, the jazz gig last Sept. 6 at Merk’s Place in Makati City was an experience that American singer Renée Olstead will not forget anytime soon.

That night, the 24-year-old Olstead, fresh from a short vacation on Boracay following her one-night dinner show at Fairmont Makati, her second in the Philippines, got another taste of the famed musical abilities of Filipino artists.

Too bad she caught only the tail-end of the set of singer Richard Merk who was backed by a band composed of Henry Katindig (keyboards); Colby de la Calzada (bass); Rudy Lozano (guitar); and Mar Dizon (drums).

Olstead and her fiancé, Tommy King, the musical director of her Fairmont gig, also missed the sneak preview of DJ Brother Wayne’s show on Radio High 105.9 FM. The veteran jock treated the Merk’s crowd to a rendition of his signature tune, Willie Bobo’s “Fairy Tales for Two.”

Even then, Olstead and King—who described Boracay as a piece of heaven on earth— saw enough to make them appreciate yet again why Filipinos are known around the world for their music.

The band opened with an instrumental piece, Earl Klugh’s “Cabo Frio,” after which Merk sang “Sunny,” “Feel Like Making Love,” “Fallin’” from the musical “They’re Playing Our Song,” and “New York State of Mind.”

He was followed by Jacqui Magno, who rendered the 1940 classic “Hindi Kita Malimot” and crowd favorites “Bridges” and “He Loves You.”

Merk joined Magno for a duet on “How Do You Keep the Music Playing.”

Olstead and King, dressed casually and sporting traces of a tan from their days at the beach, were seen singing along and moving to the beat.

The performance by Merk, Magno, Katindig, Lozano, De la Calzada and Dizon, however, was just the first course of the musical lauriat. Following them on stage was Isabella, the only daughter of Kuh Ledesma.

Isabella could hardly contain her excitement at the prospect of singing for Olstead, who had recorded her versions of “Summertime” and “Midnight at the Oasis.” But Isabella managed to control her nerves enough to give a spirited rendition of “Fly Me To the Moon,” “I Can’t Give You Anything But Love,” and “Lullaby of Birdland.”

Perhaps prompted by Isabella’s unbridled enthusiasm, Olstead joined her onstage for a duet on “’S Wonderful,” with King happily taking over the keys from Katindig.

Then they got another friend, Savannah Lumen, daughter of Radio High owner and concert promoter Francis Lumen, to jam; the three ladies did an impromptu take on Chaka Khan’s “Through the Fire.”

Their rendition was not as flawless as Olstead would have liked, but they more than made up for the missed lyrics and off timing with their sense of fun.

As Isabella said, embracing the fun moment and going where the music takes you are all part of the spirit of jazz, a genre where Olstead has made a name for herself since coming into the scene in 2004 with the release of her self-titled album of jazz and pop standards.

“It was a dream to get the wonderful opportunity to jam with her,” said Isabella.

Then Olstead, who looks up to producer David Foster as her mentor, proceeded to sing solo, accompanied by King on the keys.

The short but soulful performance was her farewell gift to the audience and to her fellow artists as she was scheduled to go back home to the United States the next day. She vowed to return, given her love for the Philippines that grows after every visit.

And just like what her signature song says, it is a love that will last.