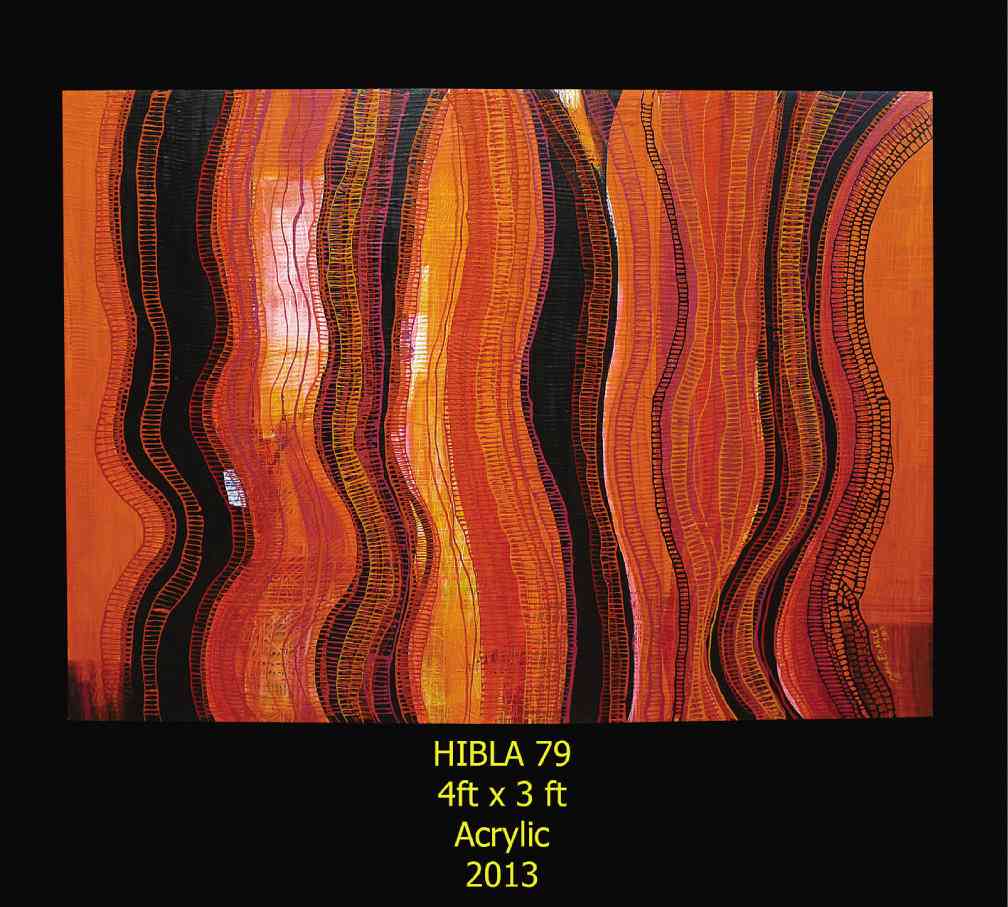 Two of her artworks from her “Hibla” series will be showcased by the Mandaluyong-based Renaissance Art Gallery.

Multimedia artist José Tence Ruiz wrote that Hibla was Ebarle’s “fusion of hill-tribe patterns and urbane calligraphy, which previously were content to occupy opposite poles of the formal lexicon.”

Ruiz added: “Ebarle is not settled into gesture for its own sake; she reins this back now and again into almost rigorous iterations of mountainfolk geometry, relieving her grids with flirtatious flicks and charged flourishes.”

Ebarle considers her paintings as abstraction in its purest form: a painting with no message to convey.

“If the two, the viewer and the artwork, interrelate with each other through the power of visual communication, then it becomes meaningful because that means my work is able to draw out a discourse,” she said.

Ebarle sought inspiration from mundane objects such as jute sacks, heavy curtains, rugged pavements, ruined walls,  lady’s dresses, and unlocks the emotion that each objects convey. The abundance of these inspirations fuel her to keep on creating something new.

“The surge of creative energy in me should be enough to keep me going. At this point, there is an incessant prodding to create. It is unlimited. Unstoppable,” she said.

Art literacy for every Juan

Ebarle said that the art industry should help teach the public how to appreciate the works not only of the classical artists but of the local artists as well. The marketing director of Faber-Castell art supplies recalled that when the firm would do art-appreciation clinics in public schools, she would ask the teachers and students the artists they knew.

“Michaelangelo and Da Vinci” would be the frequent answers.

“As if they haven’t heard about Amorsolo, Juan Luna, Tolentino, Manansala and the other Filipino great artists we had,” she said. “They know nothing about Filipino art!”

She also wants to remove the worldwide negative connotation that having a career in art would result in financial instability.

“We should be able to change that mindset,” she said.

For this reason, Ebarle finds ManilArt, the yearly art fair, important. It makes art more accessible to the public.

“ManilArt is bridging the gap between art and the people, and technically making art accessible to everyone,” she said. “Most important, however, this is one great chance for all the participating artists to be represented well by a corresponding gallery and be shown to the art patrons and, hopefully, to the whole world.”

Ebarle and over 500 artists will have their works on exhibit in the ManilArt Fair 2013 at the SMX Aura Convention Center in Taguig City, Oct. 9-13.