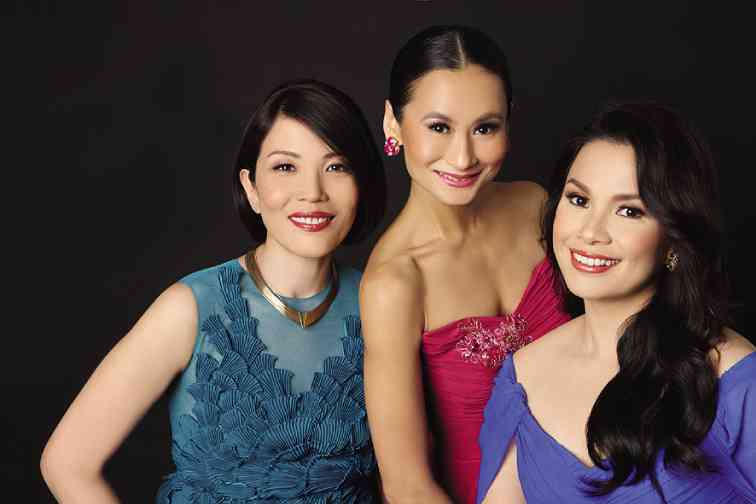 “LEGENDS and the Classics Encore” is a showcase of music, song and dance.

‘Legends’ Lisa Macuja, Cecile Licad, Lea Salonga get back together for ‘Encore’

The first day of rehearsals for last year’s “The Legends and the Classics” had just finished. The orchestra members had all filed out. The stagehands were packing up.

Prima ballerina Lisa Macuja-Elizalde had changed back into street clothes and was about to leave the rehearsal hall when she heard music emanating from the green room.

Opening the door, she was surprised to see her fellow concert headliners practicing some more. Piano virtuoso Cecile Licad was playing “Sana’y Wala Nang Wakas” on the keys with conductor Gerard Salonga assisting her and Broadway star Lea Salonga singing along.

Before she knew it, Lisa was joining in the impromptu rehearsals, marking her movements to the music.

“It was a pretty cool moment,” recalls Lisa. “As a producer, what made me admire them even more was the fact that all of them stayed even after the official rehearsal was done for the day. I felt that these are artists who really, really care about the quality of their performance, enough to stay longer on their own time and keep at it.”

Their dedication obviously paid off. “The Legends and the Classics” merited standing ovations on its two performances at the Cultural Center of the Philippines, earning critical acclaim and later the accolade as Best Concert Collaboration from the Aliw Awards.

Even before the curtain had completely come down, the three icons—still relishing the applause that greeted their final number—had one thought: “We have to do this again!”

“All three of us welcomed the possibility,” Lisa affirms. “Without a doubt, we were satisfied with the results of the two performances and were forming a bond among ourselves that a reprise sounded quite doable. Now, if we could only sync our schedules…”

Indeed, it would take 18 months before another opportunity to restage the show was possible.

But Lisa is happy to report that “The Legends and the Classics Encore” is here at last, scheduled to unfold on Oct. 12- 13 at the Cultural Center of the Philippines.

While it is essentially a repeat, with 80 percent of the last year’s performance retained in the show, some new numbers are in store for audiences.

“Definitely, there is room for improvement, and we want this year’s shows to be more polished,” says Lisa. “Cecile’s decision to perform a completely different repertoire will be an added treat. We are also ready with a surprise number to end the show.”

The concert will highlight individual spot numbers, including medleys of Broadway hits and romantic standards from Lea; immortal piano pieces from Cecile; and lyrical ballet numbers from Lisa.

What will make it even more unforgettable are the triumvirate’s collaborative performances combining song, music and dance.

How three distinct disciplines are fused together remains the top attraction of “The Legends and the Classics Encore.” But more than that, what the concert highlights is the passion these three accomplished performing artists have for their respective crafts.

As Lisa says: “We are offering you something that is the result of a lifetime of plain hard work, coupled with our own dreams and inspiration.”

Presented by the Manila Broadcasting Company and Ballet Manila, under the stage direction of Roxanne Lapus and musical direction of Gerard Salonga, “The Legends and the Classics Encore” goes onstage on Oct. 12, 8 p.m., and Oct. 13, 5 p.m., at the Tanghalang Nicanor Abelardo (Main Theater) of the Cultural Center of the Philippines.

Tickets are available at all TicketWorld outlets. For details, check out www.ticketworld.com.ph or call tel. 8919999.