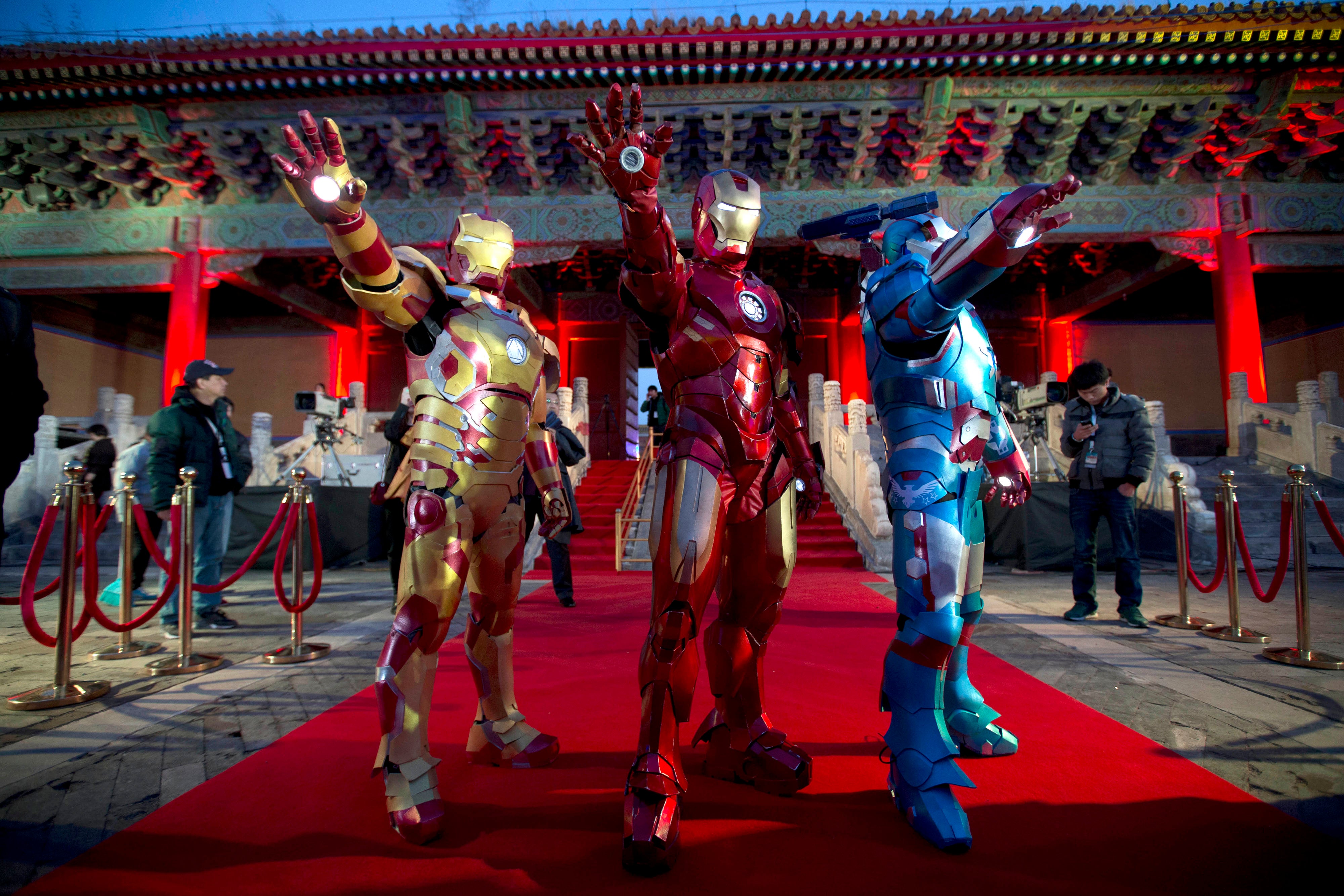 Chinese performers dressed as Iron Man pose for photos during a promotional event for the movie "Iron Man 3" before its release in China in early May at the Imperial Ancestral Temple in Beijing's Forbidden City. Hong Kong Disneyland is adding an Iron Man-themed area in the hopes that the Marvel superhero's success at the Chinese box office will help draw more visitors to the underachieving resort. The park said Tuesday, Oct. 8 that the Iron Man Experience is planned to open by late 2016. AP

HONG KONG — Hong Kong Disneyland is adding an Iron Man-themed area in the hopes that the Marvel superhero’s success at the Chinese box office will help draw more visitors to the underachieving resort.

In an announcement Tuesday, the park said the Iron Man Experience, set to open by late 2016, will include a thrill ride that will let visitors “take flight with Iron Man on an epic adventure” involving a “battle against alien invaders” across Hong Kong.

Fans will also be able to take photos with the action character, view the different Iron Man suits created by alter ego Tony Stark and visit a gift shop.

Hong Kong Disneyland revealed few other details, such as the project’s budget.

It’s the latest in a series of expansions aimed at bolstering visitor numbers at the struggling park, which has failed to draw as many tourists as expected because of its small size.

At just 311 acres (126 hectares) when it opened, Hong Kong Disneyland was the smallest of Burbank, California-based Walt Disney Co.’s parks worldwide. Some $465 million in new attractions added over the past two years, including rides based on the “Toy Story” movies, have added a quarter to the park’s size.

The expansion efforts so far appear to be paying off. The park earned a small profit of $14 million in its latest financial year, its first after losing hundreds of millions since opening in 2005.

The Iron Man ride would be the first based on a Marvel franchise for Disney, which bought Marvel for $4.2 billion in December 2009 as it sought to build up its appeal with boys. “Iron Man 3” was the No. 2 movie in China in the first half of the year, raking in 722 million yuan ($118 million), according to Chinese state media.

The Iron Man attraction would help Disney as it tries to raise its brand awareness among China’s growing middle class, which has more money to spend on travel and leisure thanks to rising incomes. Mainland Chinese accounted for nearly half the 6.7 million visitors last year to the former British colony’s Disneyland, built on reclaimed land on Lantau island.

The Iron Man attraction could help Hong Kong Disney fend off competition from bigger local rival Ocean Park, which draws more visitors. It would also help with potential competition from a Disney park under construction in Shanghai that is expected to open by the end of 2015.

Hong Kong’s Disneyland is a joint venture between the Hong Kong government, which owns 52 percent, and Walt Disney, which owns the rest.