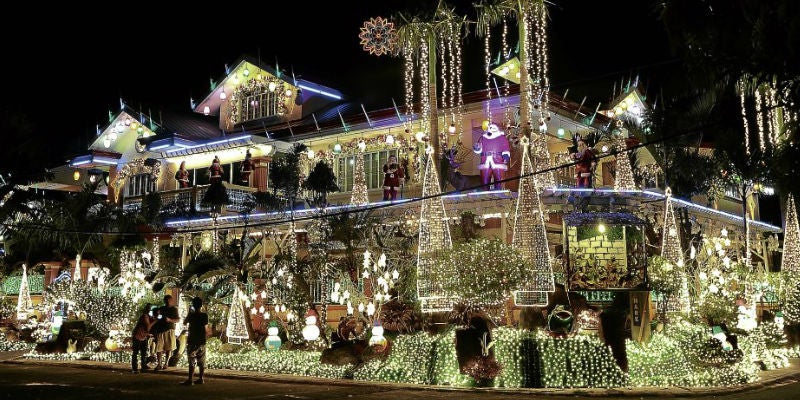 Colorful lights and assorted Christmas decor are all over this house on Mark Street at Filinvest East in Cainta City. INQUIRER / AUGUST DELA CRUZ

MANILA, Philippines—With the Christmas season approaching, the Department of Trade and Industry cautioned the public against buying old stocks of imported Christmas lights to avoid potential hazards to life and property.

Gerardo Maglalang, officer in charge of the Bureau of Product Standards at the DTI, explained in a statement that the materials used in the Christmas lights, specifically the insulation material which is made of plastic or PVC, deteriorate over time. Based on the findings, the age of plastic or PVC on Christmas lights that could withstand electricity should be about three years maximum, he added.

This is why the DTI has urged importers and traders to pull out their Christmas lights which bear the old Import Commodity Clearance (ICC) stickers from the market.

Victorio Mario Dimagiba, officer in charge of the consumer welfare and business regulation group at the DTI asked importers of Christmas lights to remove from their stocks bearing old ICC stickers issued more than three years ago, or 2010 and earlier.

A list of authorized importers and traders and approved brands of Christmas lights in the year 2011, 2012, and 2013 will be published to guide consumers in buying Christmas lights.

Christmas lights or lighting chains, is one of the 62 products under the BPS mandatory product certification scheme, which should bear the Philippine Standard (PS) mark for locally manufactured items, and ICC mark for the imported ones.