Your guide to the 2013 Nobel Prizes | Lifestyle.INQ ❮ ❯ 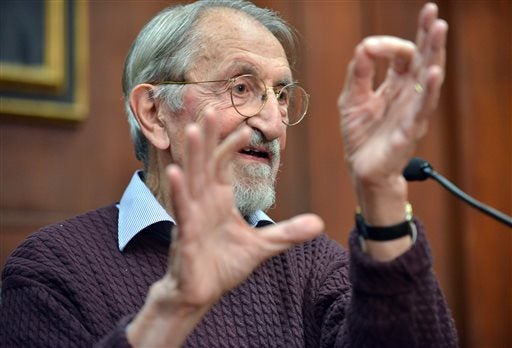 Martin Karplus describes molecular behavior as he speaks to reporters at Harvard University in Cambridge, Mass., after being awarded the Nobel Prize in chemistry, Wednesday, Oct. 9, 2013. AP

Your guide to the 2013 Nobel Prizes

STOCKHOLM — Here’s a look at the achievements being honored by this year’s Nobel Prizes, the $1.2 million awards handed out since 1901 by committees in Stockholm and Oslo:

The chemistry prize was given to three U.S.-based scientists for developing computer models that analyze and predict complex chemical reactions, which is useful for tasks like creating medicines. The approach combines classical physics and quantum physics. The winners are Martin Karplus of the University of Strasbourg, France, and Harvard University; Michael Levitt of the Stanford University School of Medicine, and Arieh Warshel of the University of Southern California in Los Angeles.

The physics prize was awarded for a theory about how subatomic particles that are the building blocks of matter get their mass. The theory made headlines last year when it was confirmed by the discovery of the Higgs particle, which originates from an invisible field that gives particles mass. This theoretical understanding is a central part of the so-called Standard Model, which describes the physics of how the world is constructed. The prize was shared by two men who proposed the theory independently of each other in 1964: Peter Higgs of Britain and Francois Englert of Belgium.

NOBEL PRIZE IN PHYSIOLOGY OR MEDICINE

The medicine prize, the first of the 2013 awards to be announced, honored breakthroughs in understanding how key substances are moved around within a cell. That process happens through vesicles, tiny bubbles that deliver their cargo within a cell to the right place at the right time. Disturbances in the delivery system can lead to neurological diseases, diabetes or immunological disorders. The prize was shared by Americans James E. Rothman of Yale and Randy W. Schekman of the University of California, Berkeley; and German-American Dr. Thomas C. Sudhof, of the Stanford University School of Medicine at Stanford University.

The Swedish Academy will reveal its choice for the 2013 Nobel literature award on Thursday and a Norwegian committee will announce the Nobel Peace Prize winner or winners on Friday. This year’s Nobel season ends with the economics award on Monday.