Why Rep is producing ‘The Producers’ | Inquirer Lifestyle ❮ ❯ 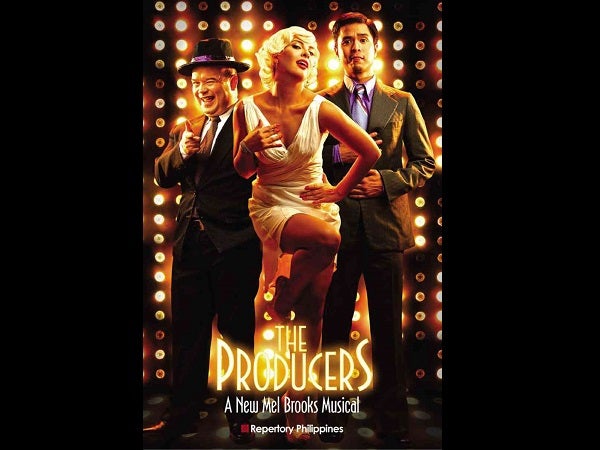 Why Rep is producing ‘The Producers’

The Broadway megahit “The Producers,” written by Mel Brooks and Thomas Meehan, a musical comedy based on the 1968 Mel Brooks movie, went on to win 12 Tony Awards, a record, and ran for 2,502 performances. And the London production played for two years.

The focus is on two down-and-out producers, Max Bialystock and Leo Bloom, (shades of “Ulysses” by James Joyce!) who cook up a get-rich scheme by raising two million dollars for a tasteless show which they are sure will be a flop, after which they will take what’s left of the money and run.

The show is called “Springtime for Hitler,” and the producers bank on the hope that it will offend everybody. Instead, it becomes a monster hit and the scheme backfires.

“The Producers” is Repertory Philippines’ big musical for this year. It will be staged during weekends from Nov. 15 to Dec. 15 at Onstage, Greenbelt I, Makati City. This was announced during a recent press conference at Onstage (tel. 5716926; [email protected]).

“The humor of the show draws on ridiculous accents, homosexual stereotypes and Nazis, along with many show business in-jokes,” said Rep in its announcement.

Lunch was served on the stage of the theater, to make the media persons feel they were part of the show. The waiters wore swastika armbands. Production numbers were staged, with SS storm troopers strutting around.

Onyl Torres, musical director, was at the piano.

I had seen the 2005 film version (the second movie) and my reaction was that it was nothing great, and the songs were not memorable. It cannot compare, for example (oh dear, comparisons are odious) with the musical blockbusters of Rodgers and Hammerstein and Lerner and Loewe.

So, why is the show the toast of Broadway and London, the darling of critics and audiences?

“It’s silly, fun, intelligent, a celebration of all those old musicals,” said Del Mundo. “The original movie was very successful because of Mel Brooks. He does have a huge, loyal following. It’s a perfect example of screwball comedy.”

For Orosa, “It’s all about show biz and everybody loves show biz. It’s true, it’s funny… it’s more of a comedy-musical rather than a musical comedy. Every line is a punchline.”

“It’s a style, you know, like Lucille Ball,” observed Gemora. “We appreciate that kind of comedy, na wala na (which is no more). It’s a labor of love.”

One question led to another. A colleague asked how theater had affected the lives of the panelists, and soon everybody was praising the medium at the expense of TV and the movies.

“TV and movies are more lucrative but they have never given me the satisfaction theater work does,” said Noel Trinidad. “Theater is never about the money.”

His son Joel declared: “I would not trade this job for anything in the world.”

“There are no prima donnas here,” Zialcita said. “Everybody does his work, everybody is equal (Del Mundo gave him a look). In other situations there are the haves and the have-nots.”

The director had the last say: “Theater is a live medium. Everyday is a brand-new day. And you become smarter if you grow up in theater.”