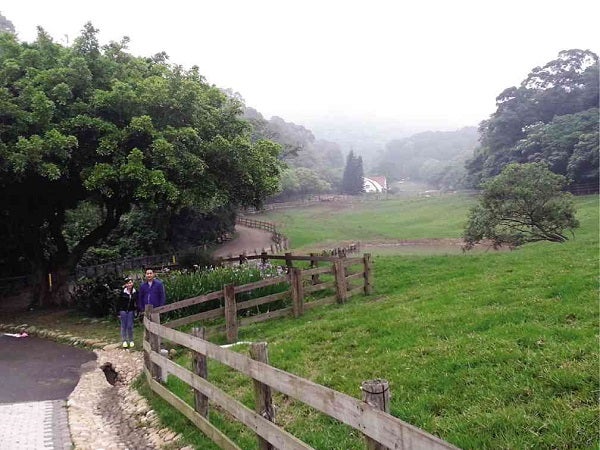 THE ROLLING landscape of the Flying Cow Ranch is a favorite location of Taiwanese “telenovela” and movies.

My initial impression of Taiwan was a land of tall buildings, with a progressive economy, and serving as the employment bastion to many Filipino overseas workers.

That soon changed after we received an invitation from Leo Fang of the Taiwan Leisure Farms Development Association.

We organized two media trips. With my ThemeWorks Events team, we were off to have a laid-back experience of the leisure farms of Taiwan, away from the hustle and bustle of city life.

Both trips were arranged by the energetic owner of Everbright Travel, Jane Co.  Within a month I visited Taiwan twice. My first trip was with Korina Sanchez and her TV team. My second, two weeks later, was with journalists and photographers from various broadsheets and magazines. Each trip consisted of six visits to Taiwan’s beautiful leisure farms.

Six hours after our arrival, we reached the southernmost tip of that country, where the first leisure farm in Tainan City awaited our arrival.

The Fairy Lake Leisure Farm welcomed us with an organic dinner of shabu-shabu and other indigenous dishes that used ingredients from the farm and its neighboring farms.

The local residents once believed that the area was inhabited by fairies in a sea of clouds encircling the hill. The 52-hectare farm is perched on this hill, thus its name Fairy Lake.

From there we moved on to the Rollin Farm in Taichung. This, to me, was one of the highlights of our visit. It gives you a majestic view of the fleeting clouds rolling in and out below the farm’s main house and accommodation area. It is said that whenever the city below expects the rains to fall, the Farm way up on the hill anticipates a beautiful view of the clouds. The rain clouds settle at the foot of the hill, forming an endless sea of white.

The accommodations are something to reckon with. The warm and lovely owner, Denver, designed each guest room with a unique theme—from the bathtub on the room’s veranda overlooking the sea of clouds to a room of exotic colors.

Having lived in Canada for sometime, Denver truly knows how to make this a place where East meets West in its design, food and hospitality.

Talking about East meeting West, the next farm, the Flying Cow Ranch, seemed to have been plucked right out of New England in the United States. While the owners are as Chinese as herbal tea, the place is very American—from the picket fences and clapboard houses to the red barns and white shops.

The owners, now in their senior years, were sent by the Taiwan government to the United States many years ago with other Taiwanese farmers, to study leisure farming and how to adapt it to the local setting. Leisure farming was meant to be an option to traditional farming.

The two farmers were so impressed with what they had seen that they decided to adopt the American look in their farm. Today this farm has become one of the most popular destinations for local and foreign tourists.

It has also become a favorite shooting spot for Taiwan’s TV and film productions. One of the more popular Taiwanese soap operas shown in the Philippines recently was shot here.

Primarily a dairy farm, most of its food is mixed with milk.

Though we did not sleep over in this next stop, I can’t help but talk about it. In the midst of the dense forests of Northern Taiwan stood a beautiful structure seemingly straight out of the pages of Architectural Digest. The winery of the Cang-Jiu Leisure Farm served us not only excellent local wine but fantastic dishes as well, a fusion of oriental flavor and western sophistication, in service, taste and style.

A Pinoy touch—the farm’s official interpreter is a Filipino woman who has lived close to 40 years in Taiwan, having married a Taiwanese.

Next stop was the Shangri-la Leisure Farm. Korina Sanchez truly enjoyed the 12-course dinner prepared for us. That evening we were entertained by local Chinese theater artists who later released up unto the evening skies lighted paper lanterns, our wishes written on them.

Like in all our stops, from our bedrooms and the main halls, we had a breathtaking view of the orchards cascading down the hillside.

Our last stop on the first leg was the Shangri-la Boutique Hotel. Unique to this hotel was a nonecumenical wedding chapel. The wedding entourage and guests walk through a hundred-meter path lined by a water fountain on its entire length. The white chapel was surrounded by a mini lake.

Our next trip two weeks later, with the print media, had for its first stop the Daken Farm. Here we got a taste of an authentic farm life setting where chicken and pigs are raised and organic vegetables are grown in a rustic setting.

An interesting trip was a visit to the Tainan Duck Farm, where we experienced making fermented duck eggs.

In the summer one can pick mulberries and phoenix-eye fruits from its gardens.

Another stop was the Rollin Farm and Fairy Lake Leisure Farm.

On the way to our next stop was a typical meal out of specially prepared lunch boxes served by small eateries at the Fenchihu Old Street.

This place was once a refueling stop for the Alishan forest trains. This stop set off the flourishing of the local economy with the mushrooming of quaint shops selling products indigenous to the area, all still retaining the old-world charm.

An evening stay at the Long Yun Leisure Farm was truly one to remember. It was luxury at its best in a farm setting where tea was grown.

The rooms in the topmost floor had ceilings that opened up to the evening sky at the push of your bedside button. As you lie in bed the evening stars above enthrall you.

Like the rooms, the tea plantation was a sight to behold.

Our last stop was the Hua-lu Herb and Flower Leisure Farm. As they say, you save the best for last. This was another highlight of our trip. The multitude of flowering plant species spread out all over the farm. The lavenders seemed to be an endless sea of lilac. Our food had not only the vegetables grown on the farm but also the colors of the edible flowers.

Taipei was the final stop: a tour of one of the tallest buildings in the world, Taipei 101; shopping galore in the night market; and, of course, the street food.

Mia Borromeo and I had our enjoyable bargain hunt for her teapots and my antique curios, and a visit to one of the most beautiful temples of Taiwan.

Everything you’ll ever want is in Taiwan. It is only slightly over an hour away by plane to the Taitung airport in the south. Taiwan offers the best of both worlds: the frenzy of bargain-hunting in Taipei and the tranquility of a laid-back vacation in its leisure farms.

One need not travel too far away from the Philippines to enjoy the cold of winter or spring; Taiwan has four seasons. While back in our country everyone was sweltering in the heat of April, Taiwan gave us that nippy spring weather.

And Taiwan prides itself in not only being one of the cleanest countries in Asia, it is also one of the safest in the world. A guest at a reception dinner we had recounted to us how, in his eight years’ stay in Taipei, he misplaced his mobile phone thrice, and in those three instances it was returned to him.

Taiwan and its leisure farms beckon, so close to the Philippines yet so undiscovered.