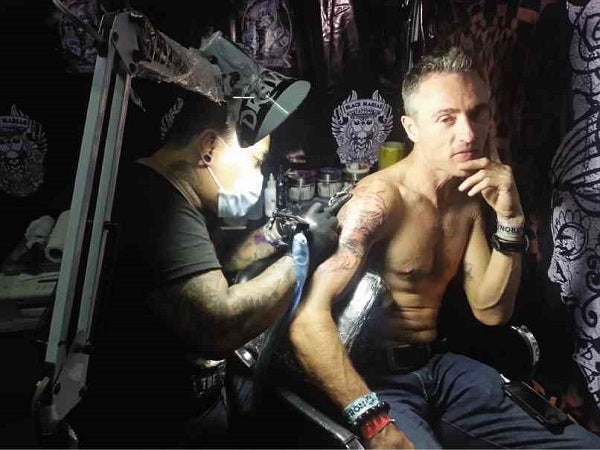 Dizzy was how we felt when we first went to the “Dutdutan” tattoo expo last year at the World Trade Center in Pasay City.

A throng of kids and adults swarming around the hall like ants scrounging for food, and the loud, droning voices of program hosts harping on the greatness of the event added up to a jarring atmosphere that caused eye fatigue and brain overload.

But this year we were properly psyched; the long lines of tattoo enthusiasts outside the World Trade Center on Sept. 28, the second night of “Dutdutan 13,” caused excitement, even as the rains fell without letup.

Inside the venue, a program schedule noted that there were 140 booths offering tattoo services—said to be bigger than last year’s.

We met a number of tattoo artists in their respective booths. Renato Togonon, from Davao City, said it was his first time to join the two-day expo. He paid P9,000 for his booth. He charges a minimum of P1,000 for every tattoo, the cost increasing but negotiable, depending on the design to be chosen.

Paolo Espinosa, from Zamboanga, was working on the right arm of Lincoln, a 22-year-old Malaysian. Espinosa said he was donating all his earnings to the victims of the recent Zamboanga siege.

At the Black Marias Tattoo booth, PJ Pangan was inking 43-year-old Australian Matt Natalotto’s right arm with a phoenix bird design. Natalotto told us he’s been living here for the past two years and works as an engineer in the Malampaya gas field project in Palawan.

Getting a tattoo is quite addicting, said Jo-Ann Miranda, 29, who went to “Dutdutan” with her husband, PBA player Denok Miranda of the Petron Blaze Boosters. She had her first tattoo after her dad died. “I wanted to remember him,” she said. “And then I wanted more.”

As we talked, she was having her third tattoo; her right wrist was being inked by Peachie Kaye Francisco with a Sanskrit symbol of motherhood, Miranda said. She has two kids.

Jasmine Hirth, 28, who works as a chef’s assistant in Germany, is also “addicted” to tattoos. “Once you start,” she said, “you tend to want more.” She has one on her right and left biceps, both forearms, and another on her chest.

The most striking, on her left forearm, is a character from Tim Burton’s film “Corpse Bride.”

Michael Morrissey, 50, owns a tattoo studio, Inkeeze, which had a booth at “Dutdutan.” He has a full-body tattoo, filled with all sorts of ghoulish characters. “I love scary movies, like those of Hitchcock’s. I also love to draw. Maybe that’s how my ‘demons’ come out,” he said, smiling.

Morrissey brought along a model, Sarah Maillet, 31, to help promote Inkeeze. Gosh, both her arms and right leg are tattooed with colorful and intriguing designs. One of them, written in French, translated to: “Memories take us back, dreams take us forward.”

She remembers getting her first tattoo at age 20, and values all the ink on her body as “an emotional thing.” The process may be painful, she said, but once it heals, her sense of attachment to the “work of art” deepens.

There were probably thousands of them mingling and taking photos with each other, apparently having fun in this gathering of tattoo freaks, when program host Ramon Zialcita introduced the next live musical performer, Mike Hanopol.

Now a Jewish preacher, the Pinoy rock god began his spiels in a surreal manner. He explained why he was there: “Dinala ako rito ng kadiliman!”

He went on and on, saying that the event had attracted all sorts of evil, and that his job was to let everyone realize it.

We howled with laughter and, just as we were heading to the nearest exit, Hanopol finally proceeded to do what he does best: sing and play the guitar.

The crowd would have loved him more—if not for the sermon.