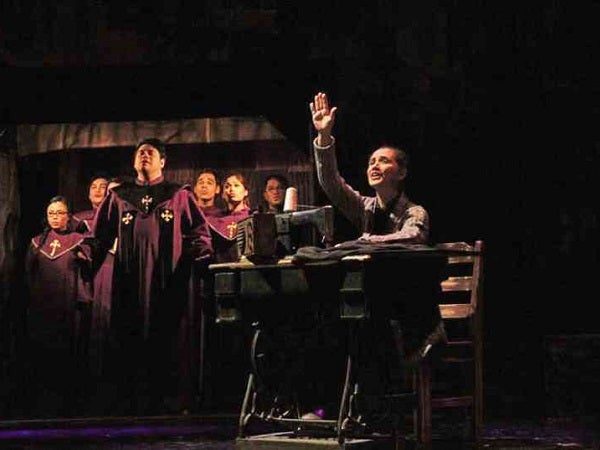 Calling the revered American critics and other detractors of the musical adaptation of Stephen King’s “Carrie”: This notorious Broadway flop recently had a three-weekend reincarnation in Manila as Atlantis Productions’ season closer—and boy, was it a bloody good production, pun intended.

What former New York Times critic Frank Rich described in 1988, when “Carrie” premiered on Broadway and closed after only five performances, as “uninhibited tastelessness” was now a sensitive, occasionally jocular take on King’s otherworldly coming-of-age story. And if the musical’s 2012 Off-Broadway revival was “exceedingly sober” for the current Times critic Ben Brantley’s taste, he should have seen this sparky but nevertheless affecting production directed by Bobby Garcia.

In the pantheon of Broadway disasters, “Carrie” occupies a legendary perch. The story of a bullied girl who slowly discovers her telekinetic powers and, later on, unleashes that terrifying power on her school on prom night, made for a bestselling novel and an Oscar-nominated film. A terrible thing happened on the way to the stage, however—much of it rooted in the writing.

The book, by Lawrence Cohen, is comparable to a dense jungle of phantom trees. An illusion of tightness shrouds the thinly translated story, which is easily divisible into “Act I: Exposition, Act II: Prom Night.” Here, stale conversational staples are a dime a dozen: “How do you do that?” asks one girl. “What?” her boyfriend replies. “Make everything better.”

Dean Pitchford’s lyrics possess a similar triteness. It’s hard not to reflexively roll one’s eyes when uninventive Valentine proclamations like “Then I know everything is gonna be fine/Because you’re mine,” lumber past the ears every so often.

Of the original creative triumvirate, it was Michael Gore and his music that makes the best impression. A second listen to the soundtrack reveals Gore’s knack for bending music to the story instead of the reverse. For example, duets between Carrie and her mother in Act I were written in such a way that whoever sings, the latter would be sure to swallow up the former in sheer volume, reflecting the mother’s dominance over her daughter.

So now, the question: Where did Atlantis’ “Carrie” go right?

Well, first of all, it had a visionary director. Garcia, whose recent directorial successes were of the cerebral kind—“Next to Normal,” “God of Carnage”—stripped “Carrie” of its fantasy veneer, and the result was a production that bled with palpable horror.

Three TV sets provided the first movement onstage, showing Sue Snell, the lone survivor of that murderous prom night, being interviewed. Then, the scene segued into the opening song, with Carrie’s classmates worrying about fitting in and “standing out one bit.” They danced in sharp, abrupt moves (choreography by Cecile Martinez), mirroring the fluctuations of their adolescent hormones.

Snippets of that interview would keep punctuating the show, and more than enhancing that creepy air of mystery, the reportage as a plot device became a constant reminder of an invisible but expected horror. Moments of laughter were allowed the audience, but almost immediately, we were made to question the appropriateness of our laughs. Such was the subtlety of Garcia’s method.

Blood and horror were also awash in Otto Hernandez’s scenography, perpetually lit in hues of red and brown by Martin Esteva. Three high wooden walls with barred windows and heavy-looking sliding doors, and a triangular roof of tired planks, contained the action. A cloistered cathedral, or a fortified prison cell?

Either way, the tightness of that space (augmented by the ideal size of the Carlos P. Romulo Auditorium) effectively shuttered the world away, trapping the audience in the unfolding story.

Blood in this “Carrie” also coursed in the tangible humanity of the performances. Apart from one or two ensemble members sticking out like sore thumbs, the acting was otherwise topnotch. Notable supporting turns came from Yanah Laurel as the repentant Sue, Jill Peña as bully-in-chief Chris, and Sheila Valderrama-Martinez as the compassionate Miss Gardner.

Highly critical to this production’s success was its astute understanding of the protagonist’s mother, Margaret White—the Bible-thumping seamstress who, in depriving her daughter of the household must-knows of female biology, becomes the very force that establishes and propels the story forward.

There probably isn’t any superlative left that hasn’t been used to describe the extraordinary onstage life of Menchu Lauchengco-Yulo. Yet, the clarity—in speech, song and action—that marked her compelling interpretation of Margaret was but another invitation to marvel at her peerless skills.

Introduced in a shabby dress and baggy sweater by costumer designer Raven Ong, Lauchengco-Yulo’s Margaret was, to borrow from Andrew Lloyd Webber’s “The Phantom of the Opera,” a pitiful creature of darkness—all of the world’s narrow-mindedness made manifest in human form.

In that four-minute bravura segment, “And Eve Was Weak,” she revealed a woman whose delirious reaction over news of her daughter’s first menstruation was more than just a fit of rage; it was religious fanaticism at its most terrifying.

But above all, this “Carrie” is about the star-making turn of its lead, Mikkie Bradshaw. With her hunched posture and harried gait, and speaking in quick, nervous sentences, Bradshaw projected quite clearly a Carrie who was both dork and damsel in distress, an “anomaly” of nature in need of rescue in so many ways.

And when she sang, as in that first sustained note of the title song, it was with this crystalline, slightly nasal voice that conveyed an image of innocence so far off from the awkward, unworldly body it inhabited in the story. True beauty, after all, lies within.

Incidentally, Bradshaw was sidelined by illness after the Sept. 19 opening night. K-La Rivera (“In the Heights,” “Disney’s Aladdin”) had to learn the part in just six days, and word was that she was just as splendid.

And so it was that this “Carrie,” in the hands of very capable actresses, also became a cartography of two women’s psychological journeys. With Lauchengco-Yulo’s Margaret, the tormentor became the frightened; with Bradshaw’s Carrie, the bullied found assured ground, if only for a while.

By the time their paths once again converged, it was in the gripping final scene, marked by death, tragedy and the last flickers of human love. In the ensuing silence, with the specter of unimaginable familial homicide grimly keeping watch, “Carrie” posed one final question: Could it all have ended another way?

At the end of Act I, Carrie pleaded with her mother to allow her to go to the prom. “Everything isn’t bad, Momma. Everything’s not a sin!” she cried.

The young girl could very well have been talking about her brief foray into the Manila stage. Rare is that local production that turns a Broadway flop into an insightful success, and for that, Atlantis’ “Carrie,” which closed Oct. 6, deserves to be remembered as a bloody good show.