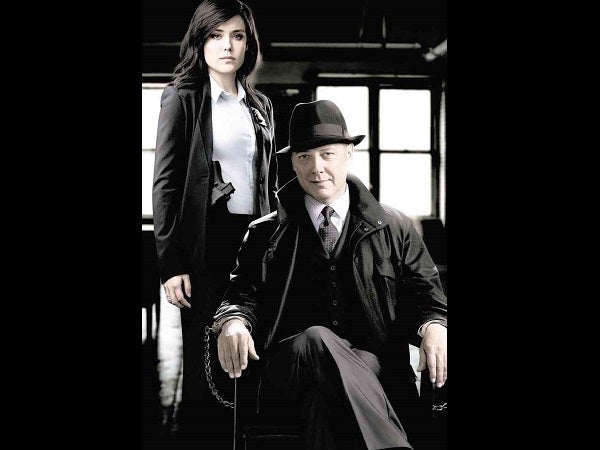 Super score:  This seems to be the year of dysfunctional parent-child relationships in sitcoms. Produced by Chuck Lorre (“Two and a Half Men,” “The Big Bang Theory”), “Mom” has all the marks of a Lorre-made show: A loud laugh track, caricature characters and jokes based on stereotypes.

Anna Faris is funny but not quite believable yet as a mom (we still remember her as the House Bunny). Allison Janney is just as great at comedy as she is at drama.

The hook:  James Spader is Raymond “Red” Reddington, who lands at the top of FBI’s most wanted fugitives for selling government secrets and dealing with criminals for profit. Out of the blue he surrenders, promising to give up his criminal network, but will work with only a newbie profiler named Elizabeth Keen.

Super score: Don’t miss it! If you liked “Alias,” you’ll enjoy this show. There’s a mystery to be unraveled, both about Red’s motives, Elizabeth’s secret past and their possible (familial?) connection. There’s a lot of undercover work going on that requires wigs and disguises, yay!

The hook: Dylan McDermott is a hotshot FBI agent who suddenly takes a family hostage. Toni Collette’s family is the one under siege as she’s asked to do something treasonous that’ll make her choose between loyalty to country and love of family.

Super score: Watch it now! The pilot episode alone was like the first half of an exciting Tom Clancy (RIP) book made into a movie. Conspiracies and secrets abound in this show and, as expected, McDermott, Tate and Collette have solid performances.

The hook: Clark Gregg reprises his role as S.H.I.E.L.D agent Phil Coulson who didn’t die after all in “The Avengers.” He puts together a team to help solve new cases involving “unknown” superheroes and other superhuman beings.

Super score: Watch it! We’ve missed having a Whedon-created “Scooby” gang and the agents of S.H.I.E.L.D have all the snark and witty repartee typical in a Whedon show.

The hook: Robin Williams and Sarah Michelle Gellar are father and daughter-turned- partners in an award-winning ad agency in this David E. Kelley show. The title is a reference to the iconic Apple advertisement which aired in the late 1990s. The two deal with their relationship with the quirks of running a competitive ad agency in today’s viral-video era.

Super score: Watch it! Though it’s hard to separate Williams from his signature schtick, the real revelation in the show is James Wolk—his chemistry with Williams is off the charts, they’re hilarious together especially during their impromptu pitch to land Kelly Clarkson in the pilot episode.

The hook: Michael J. Fox stars as Mike Henry, a TV news anchor who has to give up his career after being diagnosed with Parkinson’s disease. The show deals with the family’s adjustment to the disease as well as the challenges Mike faces as he decides to return to work.

Super score: Watch it. We remember how hilarious Fox was in “Spin City,” and were saddened when he, too, had to quit after being diagnosed with Parkinson’s disease. The show tries to see the funny side of the condition and Fox handles the episodes with grace and humor.

The hook: Stephen Merchant (Gary in “Hall Pass”) stars as Stuart, a quirky and socially awkward Englishman looking for love in Los Angeles.

Super score: Watch it. We’re fans of Stephen Merchant; his expressions alone will crack you up, but his strength lies in his self-deprecating British humor.

The hook: The show is based on the biography of Dr. William Masters and Virginia Johnson, a couple whose work delved on human sexual responses and diagnosing and treating sexual disorders.

Super score: Watch it. This is an interesting look into the way people viewed sex in the ’60s. Dr. Masters is credited for pioneering groundbreaking research on a topic that was once considered taboo and smutty.

The hook: Wilson stars as a lawyer whose friends have decided to shake up their evenings and do something fun and different every night. Naturally, things don’t go their way.

Super score: Two words: Rebel Wilson. This comedy produced by Conan O’Brien and Rebel Wilson will give you your weekly dose of Rebel; it’s still not enough, but it’ll do for now.

The hook: After Nathan Miller (Arnett) informs his parents of his recent divorce, his parents end their marriage, too.

Super score: Watch it. We’re always hopeful whenever a new Will Arnett comedy premieres because we cross our fingers thinking it will finally break Arnett’s cancellation streak. The cast is solid, and Beau Bridges is hilarious.

The hook: The evil, gorgeous, and magnetic Klaus of “The Vampire Diaries” finally gets his own show.

Super score: It’s Joseph Morgan, of course you have to watch it! Fans of “The Vampire Diaries” will definitely want to tune in to the spinoff featuring the original vampires.

The hook: Sean Hayes stars as a gay single dad raising a teenage daughter together with his mom. Sean also has to contend with a mean boss who won’t give him a break.

Super score: Watch it! We’ve missed “Just Jack” on TV and now we get to see him again flying solo. We’re hoping Megan Mullally will guest down the road for a Karen-Jack retrospective.

‘The Witches of East End’

The hook: The show centers on three witches—a mother and two daughters—who deal with their powers in the modern world.

Super score: Watch it. The “Charmed” of this generation is loosely based on author Melissa de la Cruz’s book of the same title.

The hook: Based on the British television series, the teen drama focuses on young kids who have acquired powers as a consequence of human evolution.

Super score: Watch it. It’s teenagers dealing with powers and angst, what’s not to like?

The hook: The show’s third season focuses on witches this time!

Super score: Watch it! We loved the first season but couldn’t keep up with the plot twists of the second one (“Asylum”). This third season features the same cast with the addition of Kathy Bates and Emma Roberts. The show will shuttle back and forth between modern-day witches and in the 1830s during the Salem witch trials.