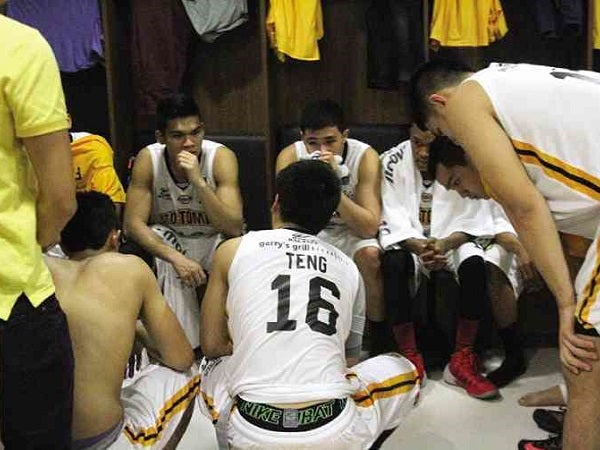 THE HUDDLE after the game

Jeric Teng took over the huddle in the dugout after their loss last Saturday. Coach Pido Jarencio took a few minutes alone to calm and compose himself.

The UST Growling Tigers captain squatted in the middle of the room and sat directly facing Aljon Mariano and Kim Kaizen Lo.  Goofball Kevin Ferrer found a place next to him. Everybody looked sullen, but all eyes were on him.

“We know we could do it, but we did not work for it,” Teng said in Filipino. “We should know what our mistakes are and we should learn from them.  We will lose again if we play like this on Game 3, believe me.”

The rest of the locker room would be noisy from the comings and goings of school officials and supporters who wished them well, but the players would be too focused on what Teng was saying to hear any of them.

“We had a hard time the entire season.  We are one game closer than last year.  Do you know how hard it was to get here?  Lumusot tayo sa butas ng karayom.  Nobody is going to remember that UST won back-to-back second place,” he said.

He would add that he felt frustrated and disappointed because he knows the true capability of the team.  He reminded them that they upset a lot of teams this season.

“Aren’t you embarrassed before our fans?  They cheered so loudly with their balloons.  We used to complain that nobody’s watching our games and now they’re watching. Yet, we didn’t act as if we wanted to play,” he said.

When some of his teammates voiced out their frustrations with the referee calls in the first half, Teng merely shrugged his shoulders. He told them to get over it, that they should be the one to adjust.

Teng would be one of the first to point out how distracted his teammates were.  He told them that they should start taking their last few practices seriously.

The Tigers had allowed fans into the Quadricentennial Pavilion Arena to watch them practice before Game 2. They even allowed the fans to have pictures taken with them—during practice.

All that changed this week.  This time, they did a closed-door practice and not a single spectator was allowed in—not even the press.

“After this loss, nobody is going to blame nobody,” Jeric Teng said.  “We will forget about this loss.  We will work on Game 3.  On that day, nobody will work for 30 or 20 minutes. We will all work for 40 minutes.

“One more game and we will be forever remembered.  Just one more game.”