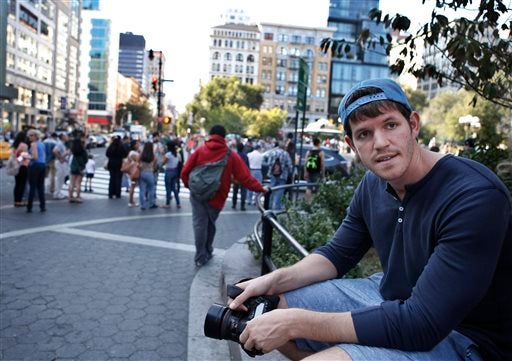 NEW YORK  — Brandon Stanton rounds the corner, spots a tiny blur of pink, and runs over to ask if he can take a picture. He crouches in a busy Manhattan bike lane to get the shot: a beautiful little girl with pink leg braces, a walker and a big smile, her dad posed behind her.

Stanton posts the picture on his website, HumansofNewYork.com — known to fans as HONY — with a mere two sentences from the father: “We go to four appointments every week, but I don’t mind. She’s my blood.” No names or other details.

Within an hour, the image has 22,000 likes. Comments like this pour in: “HONY. Restoring my faith in humanity, one photostory at a time.”

Not bad for a guy who once flunked out of college, was fired from his first job as a bond trader and didn’t own a regular camera until 2010.

Stanton, 29, who’s from Marietta, Ga., and lives in Brooklyn, shoots every day, taking 5,000 street portraits over the past three years. As he strolls around, Canon in hand, wearing a backward baseball cap and New Balance sneakers, he’s stopped every few minutes by fans, many of them teenagers. “Thanks for inspiring me,” Sebastian Sayegh, 19, told him.

Part of his genius is offering short, provocative captions that allow readers to imagine the rest of the story. He quotes a thin, pensive man with a cigarette as saying: “I’m a little bit separated with wife now.” A guy carrying a bouquet says: “Sometimes, when I’m going home to see her, I think: ‘Nobody should be this happy on a Tuesday.'”

Some photos are pure celebration, like pictures of kids titled “Today in microfashion”: a dapper boy in blue suit and sunglasses, a smiling girl in a bright red, Islamic-style headscarf and tunic.

Tender stories are featured, too, often emerging from the questions Stanton has designed to quickly “uncover the most meaningful events in a person’s life.” His recurring

“What was your saddest moment?” query elicits a lot of “the day my mother died” quotes.

HONY has even inspired a parody, Hummus of New York, and copycats — Humans of Sydney, Humans of Portland — but they are pale imitations.

Stanton accepts no advertising for HONY, but he occasionally asks fans to support causes related to his photos. HONY followers donated $300,000 for Hurricane Sandy relief; $30,000 to send a kid to camp and $100,000 to a YMCA. (Stanton wanted the fashion label DKNY to give $100,000 to the YMCA after his photos appeared in a window display without permission; when the company only gave $25,000, his fans made up the rest.)

He doesn’t take notes or use a tape recorder: “Once they say the quote I am going to use, I know it. So I don’t have to remember the entire conversation.”

The Associated Press asked Stanton to answer some of the questions he asks his subjects — and a few others.

AP: What was your saddest moment?

STANTON: I had flunked out of college and lived with my grandparents for a couple of years. And during that time my grandfather got really bad Alzheimer’s. I got back into the University of Georgia right as his Alzheimer’s was starting to get kind of bad. I knew when I was leaving he wasn’t going to be the same person when I came back.

STANTON: I’m a single content producer of a blog seen by millions of people. I don’t want to mess it up and I don’t want to lose it. So it’s always on my mind. My greatest struggle is hanging out with friends, family and my girlfriend, and being present.

AP: What advice would you give a large group of people?

STANTON: Don’t wait for the perfect moment. Humans of New York, when I started it, was nothing like it is now. … It didn’t emerge from me thinking a fully formed idea and executing it. It emerged from me tinkering and working and evolving. So many people wait until the pieces are in place to start, and often that moment never comes.

AP: In 2011, the AP wrote a story about your plan to take a visual census of 10,000 New Yorkers. What happened to that project?

STANTON: HONY’s evolved so much. It’s so different from when you guys wrote that first article. It used to be a photography blog. I can’t call it that any more. It’s a storytelling blog. Before, I was visually responding to the street. I wasn’t looking for anything in particular. Now I look for someone sitting alone. I look for people who are approachable.

AP: What was your happiest moment?

STANTON: That (AP) story was written after six months of obsessively doing this all day, every day, walking thousands of miles and taking thousands of portraits and I really hadn’t been able to get any traction or develop an audience. After that article was written, my Facebook fans jumped from 220 to 770. … I remember going to sleep that night the happiest man in the world. After all that struggle, I finally thought it was going to work.

AP: As HONY grew, so did comments mocking or insulting the people you photographed. You finally told readers “the right to free speech does not apply here.” What happens to negative comments now?

AP: You often photograph homeless people and people with disabilities. Does anyone complain about being a poster child?

STANTON: I’ve gotten some great portraits. I’ve also been cussed out. I just have to approach everybody the same way and keep my intentions clear. … If somebody asks me to take their picture down, I do it.

AP: What’s the most shocking thing that’s happened to you?

STANTON: My fans trend young and they trend female, but one night I was in Bryant Park and there was this man, about 70, sitting alone on a computer. I took his photo and said I run a site called Humans of New York. Then he flipped his computer around. He’d been looking at it.