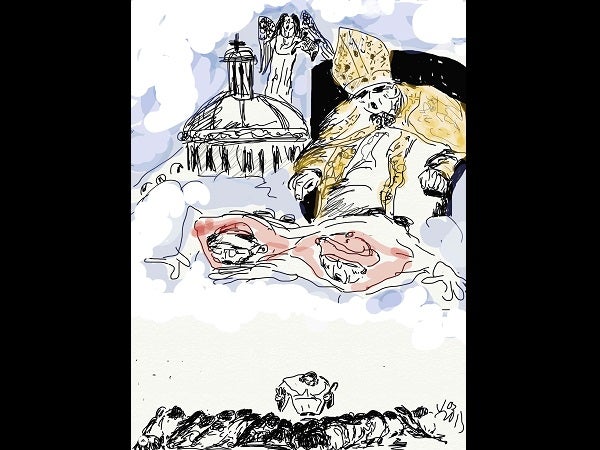 “WHAT’S Francis doing down there, doesn’t he know we’re supposed to operate from here—on high?”

It is with such exuberant and hopeful fondness for the new pope that many Catholics greet one another these days. Indeed, particularly for us borderline, estranged or otherwise marginalized members of the church, Francis is so easy to love.

Finally, a pope, unsurprisingly a Jesuit, who seems genuinely looking for a way to give us back our space in the mother church’s embrace, perhaps through some special dispensation that would allow us to  receive again the redemptive sacrament of Communion, which had been denied us for sins supposedly beyond forgiving.

His idea of shepherding is inspired by two of his favorite saints, Augustine and Francis, of course, whose name he has adopted as pope: “Instead of being just a Church that welcomes and receives by keeping the doors open, let us try also to be a Church that finds new roads, that is able to step outside itself, and go to those who do not attend Mass, to those who have quit or are indifferent.”

And ruing the clerical limited-mindedness on such matters as birth control and homosexuality, he asks: “What happened to love?”

I’m tempted to remark, using an ecumenical variation on the words of ancient, pre-Christian seekers who found God and love as one in their own hearts: “You, Francis, are what you are looking for.”

From interviews he has been giving, with a frequency, accommodation and openness never before seen with past popes, he has also given me a new perspective on humility.

Taking questions from a journalist, a fellow Jesuit, he says that to be humble is to allow God His space and accept that He is more than we can know, much less understand completely: “You must leave room for the Lord, not for our certainties; we must be humble.”

Dogma could very well be our certainties, while love, the one all-inclusive virtue on which Francis founds his papacy, goes beyond dogma, into the realm of God’s space, the extent of which we are simply incapable of imagining.

Father Spadaro, the Jesuit interviewer, asks, referring to him by his pre-papal identity: “Who is Jorge Mario Bergoglio?

His reply: “I’m a sinner whom the Lord has looked upon.”

I am myself only grateful to be receiving some attention from God’s own representative, as might a spurned lover be consoled by a mere glance from the beloved, as Gutierre Cetina pleads in the final line of one of his poems, “Miradme al menos.”

To be sure, I’ve been blessed to have come into the holy presence of two popes, Pius XII and John XXIII, both beatified, as happened, on the same day—Sept. 3, 2000. In the winter of 1956, at the height of the Suez Canal crisis, my parents decided I should come home from vulnerable Spain, where I had been sent after high school for precollege studies.

Arrangements were made for me to join Jose Laurel Jr., Speaker of Dad’s Congress, and his wife, who happened to be traveling in Europe. A stop on the way home put us in a private audience with Pope Pius XII. I was only 16.

I wore black from veil to stockings, as was prescribed. It was like visiting a king in his own palace. At every door stood a pair of medieval-looking guards.

When he entered, we approached and knelt to kiss his ring. Pius seemed taller and more ethereal in person. I don’t know why, but I thought he looked like Perry Como. I was brought to tears anyway.

Before we left he opened a desk drawer and pulled out a bunch of rosaries, personally blessed, for us to take home. In a sort of reflex, I panicked, as I sometimes do now in church when collection time comes during weddings, when I usually have no money on me.

It had taken years before Pope Pius XII was vindicated from allegations of consorting with the Nazis during the war. Without having to defend himself, he was fully redeemed—beatified. And as young and flighty as I was, something in me somehow recognized his genuine holiness.

I saw Pope John XXIII, his heftiness carried on a papal chair, and met him again in a room full of people, among them Filipinos. Pope John was lovable in his own grandfatherly way.

Now comes Francis, a drastic and welcome change from his predecessor Benedict, who’d rather have a small pure-by-dogma church than risk diluting it. Despite the difference in papal style, reports on their interaction and other times spent together are quite touching, each obviously supportive of the other, as I imagine only two living popes could.

On our bucket-list-on-a-budget, a trip to Rome for him is top-ranked, if he doesn’t get here first.

Anyway, before he comes he has already been welcomed by me, myself a nominal Catholic, and a friend and former classmate, Carminda, ever a practicing Protestant. Riding together to the Cultural Center the other night, we somehow got started on Francis.

“Oh, but he’s mine, too,” she says in the sort of call-and-response fashion in church, which between us is a truly ecumenical one, yet further solidified now by Francis.