The 7 layers of the universe | Lifestyle.INQ ❮ ❯ 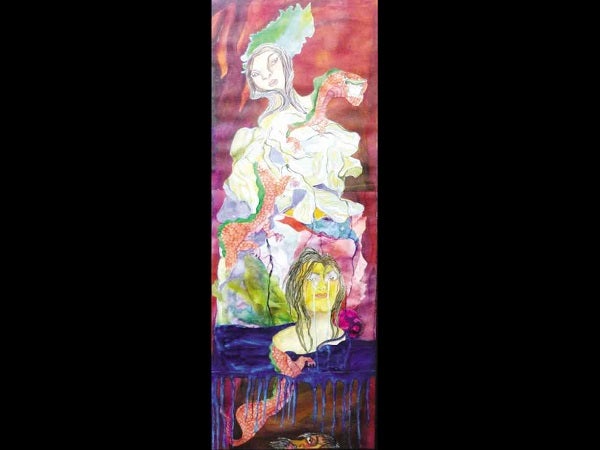 The 7 layers of the universe

The first highest level where the supreme god Manama lived in was called Langitnon or heaven.

The second level was Ibabaw-non. It was inhabited by human mediators or babaylan who interceded for man with the spirits.

The third level or Kahangin-an was the atmosphere directly above the earth’s surface. Its two denizens were a flying horse, half-human, and a huge bird that resembled an umbrella when flying.

The fourth level was Lupan-on, the earth we lived in. It was inhabited by numerous beings such as engkanto whom we did not want to share space with. It just brought us illnesses and miseries. (Visayan, Alicia Magos, 1986)

Earth was believed to be flat.  It was difficult for people to hunt; the animals were scarce because they were always falling off the edge of the earth. (Mountain Province, Carmencita Cawed, 1972). At one point, the kaingin could no longer supply enough food and people began to starve.

The Zambal god, Mamalyari, pitied the people and decided to create another source of food. He stood up and urinated for 13 hours facing east. Then he faced the west and urinated another 13 hours. Rivers and rivulets formed. Apo Mamalyari threw leaves of different sizes and shapes in them, which became fishes.

Navel of the sea

Part of the universe was the sea. In the navel of the sea was a big hole. A giant crab, son of the moon, was so powerful that lightning flashed wherever he opened or closed his eyes.  Whenever the crab sat on the bum hole, it became high tide on earth. When he left the hole, water rushed in and it became low tide. When the crab refused to move out of the hole, it flooded. (Mindanao, Fay Cooper Cole, 1913).

The earth was supposed to be shared by fairies and other engkanto with whom man had to coexist (but often didn’t).

Below the earth were three more layers. The next, or the fifth, was Idalmunan (from dalum, deep) located in the bowels of the earth).

The sixth layer or Tubignon was covered with water. In it dwelt the water spirits—the mermaids and sea nymphs with a kingdom of their own.

The seventh, or the bottom of the universe, was the base. No spirits lived there. The four bamboo posts that supported the earth, like a bahay kubo, were visible from there. Occasionally, an underground hog made an appearance and scratched itself against one of the bamboo posts. This produced an earthquake. (Visayas, Alicia Magos, 1986).

Earth people sometimes tried to get to the skyworld by jumping from the top of the highest mountain of their province, and a few succeeded.

Lumabat discovered another way. After he had walked a long, long distance and reached as far as the horizon, he noticed that the sky and the earth would part and close like jaws chewing. The horizon’s edges, however, were very sharp, like sword blades.

Many of Lumabat’s companions who attempted to go through were snapped by the jaws and cut into two. Lumabat decided to go through last. He was alert and quick—quicker than the rest. Before the sharp edges could close, he had jumped and was safe in the skyworld. Lumabat was made into a god. (Bagobo, Mindanao, Laura Watson Benedict, 1916.)

In turn, some celestials who had lived in heaven had grown weary of life up there with its monotonous diet of meat and wardrobe of warm feather clothes. They decided to come down to earth. One plucked feathers off a large bird and out of them fashioned a rope. A few goddesses were able to slide easily through the hole. But a fat woman got stuck in it. She became the moon. (Visayas, Francisco Demetrio, 1972).

One day, a woman called Matono was working in her field on the earth when the part she was standing on fell to the underworld. As she strolled about, Matono noticed that kamote, gabi and other tubers were dangling above her head. She realized that those were the crops the people on earth had planted. The ground crops were accessible to the dark, long-eared, sharp-toothed denizens underneath. No wonder there were never enough tubers for earth people to harvest. (Mountain Province, C.R. Moss 1924).

Life in the underworld, it was also discovered, was the opposite of life on earth. Day on earth was night below. That was because the sun traveled daily around the flat earth, continuing to shine underneath it. Rivers in the underworld flowed upward. Rice was eaten cold.

One day, two earthly brothers called Timungan happened upon an unusually large tuber in their swidden. They dug and dug around it until they had created a deep canal. With all their might, the Timungan brothers pulled up the giant kamote. It created a very large hole. They peeped and realized that they were looking down into the underworld!

Tying the end of a rope around a big tree, the curious pair lowered themselves down the earth. They saw a wedding feast going on. Gongs were playing loudly. They saw a table laden with food and helped themselves to it. While eating, the brothers noticed that the underworld dwellers had tails!

They heard one of them say, “They must be good to eat, let’s catch them.” The Timungan were so scared they attempted to escape through the windows. But Masiken, the lord of the underworld, caught them. To keep from being eaten, one of the brothers said he would marry the old man’s daughters.

Masiken was pleased that a “foreigner” wanted to marry his daughter. The marriage was celebrated at once. A hog was butchered and a shaman performed the ceremony.

Sometime after the wedding, the old man Masiken took his Timungan son-in-law and his brother on a hunting trip. Everyone stalked game. Soon the hunters came upon an old carabao. The carabao ran past one of the Timungan brothers. When he tried to catch it with his rope, he realized it was not a carabao at all but a human being. Horrified, he let her escape.

But the hunters went after the carabao and caught it.

“Don’t kill that, it’s an old woman,” pleaded the Timungan.

“What of it?” said the hunters. “It’s good to eat. If you don’t like eating people go back to earth where you belong.”

“We better do,” said the Timungan brothers.

The old man Masiken consented. The brothers climbed up the same rope they used to come down and went back to the earthworld. (Mountain Province, Lawrence Wilson and L.V. Mallari, 1958).

Entry to the next life

Each province in the Philippines had its own subterranean rivers through which the souls were transported to the next life. The entry points to those rivers were at the foot of their highest mountains such as Kanlaon in Negros and Banahaw in Laguna.

As in the clay sculpture on the cover of the Manunggul jar (circa 890-710 BC) in the National Museum, an oarsman ferried each individual soul in a banca. All the boats eventually joined a mainstream that brought them to the land of the dead.

At the entrance to the land of the dead was Mebuyan. She was the sister of Lumabat who had braved the chomping, sharp-edge jaws of the horizon to go to the skyworld.

Long, long ago Mebuyan and her brother had a big quarrel. Lumabat had told Mebuyan, “You shall go with me to heaven,” and she replied firmly, “No, I don’t want to.” Instead, she went down below the earth and became a goddess of the underworld.

Mebuyan’s body was covered all over with nipples. Babies who died before they were weaned suckled Mebuyan’s multiple breasts until they were ready to join the other souls on their trip to heaven. (Bagobo, Mindanao, Laura Watson Benedict, 1916).

The story of Manama and Ogassi in Part I comes from the “Treasury of Stories” by E. Arsenio Manuel and Gilda Cordero-Fernando, Anvil Publishing, 1995.

The rest of the material is from “The Soul Book,” by Francisco Demetrio, SJ, Gilda Cordero-Fernando and Fernando N. Zialcita, GCF Books, 1991.