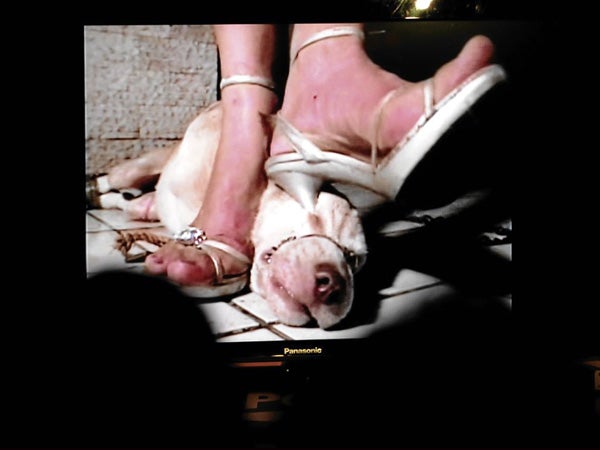 The welcome crash of crush videos

Young girls in lingerie and high-heeled shoes kicking a dog to death and gouging its eyes out with their stiletto heels. A rabbit having its ears ripped off and being flayed alive. A frog being stomped on and crushed. A small monkey kicked viciously until it dies.

These are only some of the brutal and gruesome images in so-called crush videos that are allegedly produced and sold overseas by Filipino couple Victor and Dorma Ridon over the Internet. The video can fetch anywhere from US$80 to US$200 each.

The Ridon couple was recently arrested and indicted for violation of Republic Act No. 8485 or the Animal Welfare Act, and Republic Act No. 9147 or the Wildlife Protection and Conservation Act before San Fernando, La Union Regional Trial Court Judge Alpino Florendo.  They have since posted bail of P104,000 each for their provisional liberty.

In the Ridon’s crush video website, potential video buyers can choose what the “animal torturers,” mostly underage girls, should be wearing and which small creature they could stomp on or torture to death.

The torture of small animals is intentionally stretched for several minutes to an hour. The animal’s excretions, blood and innards oozing out of its small body as it is being crushed to death are shown in grisly detail and are punctuated by the creature’s squeals of pain.

The Ridons’ indictment for the sale and production of crush videos under the animal welfare laws is a first in the Philippines, where this form of sexual perversion is virtually unheard of, and where willful cruelty to animals, particularly household pets, is considered an abomination.

Previously, the production of the animal torture videos was attributed mainly to foreign countries where crush fetishists – the buyers of these violent videos –abound.

It was only last year when the People for the Ethical Treatment of Animals (Peta) discovered that one of the websites catering to the sexual perversion was actually based in the country. An informant in Russia had come across the site and recognized the “animal torturers” as young Filipino women.

Peta members were able to track down the maintainers of the website in Northern Luzon, and sought the help of the National Bureau of Investigation (NBI) office in the Ilocos region. The Ridon couple, it turned out, hail from Bocnotan town in La Union.

An additional complaint was lodged with the NBI by the Animal Welfare Coalition.  Both organizations submitted several videos as evidence, which eventually stirred the NBI Environmental and Wildlife Protection and Investigation Division (EWPID) into action.

NBI-EWPID chief Sixto Comia said the Ridon couple had been identified through the email they used in selling the videos to customers. Dorma Ridon, he added, had been sending email to clients using the alias Lynlyn Burnok.

Comia revealed that the women in the crush videos, most of them minors, were paid from $25 to $1,000 depending on the difficulty of the client’s request.

Apart from the email, a 14-year-old witness, who worked as the Ridon couple’s housemaid, helped identify them as the alleged producers and sellers of the crush videos, enabling the investigation bureau to file multiple charges of animal cruelty against them.

NBI Behavioral Science Division executive officer Dr. Josephine Gatdula explained that the buyers probably get sexual gratification from watching the crush videos. She theorized that the patrons could be victims of physical abuse and enjoy the semblance of control they could exercise over the torture and killing of the animals.

Although the Ridon couple was brought before the court for allegedly selling crush videos, Peta has expressed concern over the country’s lack of laws that cover the production and distribution of animal torture clips.

According to the animal rights’ organization, perpetrators of animal torture face only a maximum of two years’ imprisonment and a P5,000 fine under existing laws. Thus, a proposed legislation in Congress criminalizing the production of crush videos is a welcome development for the group. It could effectively deter the proliferation of the animal torture clips, Peta said.

Late last year, US President Barack Obama signed House Bill 5566 or the Animal Crush Video Prohibition Act of 2010, which bans the creation and distribution of obscene animal torture videos that show the intentional crushing, burning, drowning, suffocation  and impaling of puppies, kittens and other live animals for the sexual gratification of viewers.

Buhay party-list representatives Irwin Tieng and Michael Velarde have proposed laws patterned after the US statute that would criminalize the sale of crush videos and other filmed acts of animal cruelty in the Philippines.

Tieng’s and Velarde’s House Bill 4595, or the anti-animal crush video act of 2011, prohibits “knowingly selling, marketing, advertising, exchanging or distributing” crush videos, which they describe as  an extreme form of animal cruelty.

Senator Manny Villar’s Senate Bill 2882, filed in July, goes by the same title as its counterpart in the lower house of Congress and echoes its proposed provisions in meting out  harsher penalties against those catering to the sexual perversion as it explicitly prohibits the creation and distribution of animal crush videos.

It defines an animal crush video as “any photograph, motion picture film, video, or digital recording or electronic image that depicts actual conduct  in which one or more living non-human mammals, birds, reptiles, or amphibians are intentionally crushed, burned, drowned, suffocated, impaled, or otherwise subjected to serious bodily injury; and is obscene.”

In his explanation, Villar said, “It is hard to believe that this sort of thing even exists and that a law is needed to prevent it. Animal torture is outrageously disturbing. Common decency and morality dictate that those engaged in it should not be profiting from it; they should be imprisoned.”

He added: “While the torture of defenseless animals is in itself despicable, numerous studies also show [that] cruelty to animals is often the first step leading to violence against people. This law is one step toward ending this cycle of violence.”

For her part, Senator Miriam Defensor-Santiago filed Senate Resolution 397 directing the proper Senate committee to conduct an inquiry in aid of legislation on the reported proliferation of crush videos involving the performance of lewd acts by minors while killing small harmless animals.

The senator filed the resolution in February, following a complaint filed by Peta against crush videos that the group described as a “new fetish in the adult movie industry,” where minors are used to perform lewd acts while crushing live animals.

In filing the resolution, Santiago sought to address “the inadequacy of the Animal Welfare Act, which only prescribes a penalty of no less than six months to no more than two years or a fine of not less than P1,000 for cruelty against animals.”

She pointed out: “Child abuse coupled with animal cruelty should be meted out… stricter and harsher penalties in order to prevent the proliferation of such a sickening and depraved practice.”   She explained that children forced to perform lewd acts while killing small animals suffer from sexual abuse and trauma.