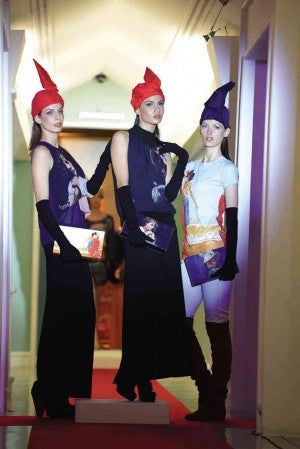 Juan Luna was the star of the 40th anniversary Sotheby’s auction in Hong Kong last Oct. 5.

The original “Old Master” of Philippine art was classified as a “Modern Master” in the Southeast Asian art auction by the British house, where a version of his famous “España y Filipinas” was sold for HK$25.88 million (US$3.3 million).

There are two other versions of the beautiful work, a Neoclassic masterpiece symbolizing the friendship between Spain and the Philippines, the best and most famous of which hangs at the Lopez Memorial Museum.

Luna is dominating not only auctions but fashion as well. On Oct. 11, right at the Lopez Museum itself, Freeway unveiled its fashion tribute to the painter.

For the first time, Freeway Art is honoring not a National Artist but one who towers over all the artists of the 20th and 21st centuries—Juan Luna.

The event was held at the Lopez Museum & Library ([email protected]) at Ortigas Center, Pasig City. It was tied up with the “Trajectories” exhibit (until Dec. 20) in the museum.

On display are major works of Luna, Felix Resurreccion Hidalgo, with masters of the contemporary period.

The tribute to Luna took the place of a fashion show displaying dresses inspired by works of the master artist, plus a panel discussion with art historian Santiago Pilar and museum curator Cedie Lopez-Vargas, emceed by Lexi Schultz.

Except for one male, all the models were female who sashayed around on a red carpet with white blocks for elevation. The clothes ranged from casual to corporate and cocktail, and the fabric knits, stretch poplins and stretch soft georgettes.

There were also mouse pads, iPhone cases and tote bags.

During the panel discussion, Pilar described Luna “as the first OFW (overseas Filipino worker), a genius and a miracle. He was the first Filipino painter to win a gold medal in Europe. He was recognized in Madrid and also Paris.”

What made it doubly thrilling for the Filipino expatriates (Indios Bravos) in Madrid was that Hidalgo had won a silver medal in the Exposition; so both Luna and Hidalgo were lionized by the reformers led by Rizal.

Luna’s style was conservative, “becoming passé,” Pilar said. He apparently was not influenced by the Impressionist artists like Manet and Monet, then in vogue in the late 19th century.

“He emphasized history, and that type of painting educated Europeans, who were 90-percent ignorant,” said Pilar.

He added: “Luna came and he exalted the humble Indio. The Indios at the time really wanted to exert themselves, to be as good as the puti (white man).

Asked what makes a master, Pilar said “he should really know what he’s doing. He is an authority and he should be recognized for it. He should have skill, technique and imagination.”

Vargas said “an artist must be sincere in what he represents. You begin with something that appeals to you, that spreads.”

Pilar cited the importance of heritage: “Those from the past tell their story of how our ancestors lived. Heritage is very important, they define you. We have to preserve our heritage. It will also make your mind work. Some say history is boring, but if we think history, it will stimulate your imagination.”

Oh yes, we were talking about the fashion show and the Juan Luna Collection. “The designers made the works of Luna so relevant,” the art historian concluded.