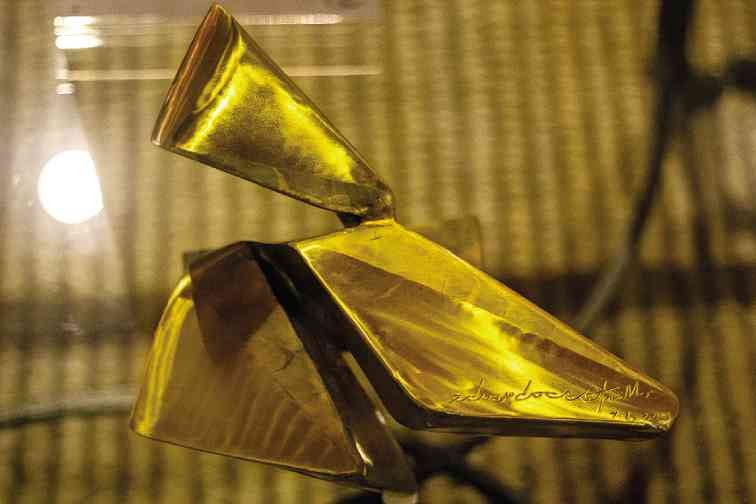 One of the sculptures Ed Castrillo designed specifically for the auction, “The Vital Form,” is sold at a fixed price of P51,600.

Prominent sculptor Eduardo Castrillo is giving back to the community as he auctioned off his works in Castrillo Hands On Care to Bid, Bid to Care. It was an invitation-only auction for the volunteer group Hands On Manila (HOM), in South Forbes, Makati, last Sept. 26.

These students will be mentored every Saturday and aided with teaching materials touching on  the themes of Heroism for Grade 4; Entrepreneurship for Grade 5; and Leadership and Community Service for Grade 6.

Castrillo said he warmed up to the idea of giving to school kids and helping in their education, upon remembering  his  juvenile delinquent years. He said that many streetchildren who were naturally gifted should be given the chance to succeed.

“Growing up, I was lucky enough to have had a patron to help me and to give a working student scholarship to finance my university education,” he said. “This is why I am very happy to collaborate with Hands On Manila for this worthy project.”

As a teenager, he would roam the streets of Sta. Ana, Manila, with fellow kanto boys, and joined one of the most notorious street-gang leaders in the Philippines in the 1960s, Arturo “Boy Golden” Porcuna.

“Whenever the police came and they (gangmates) were in trouble, I would be the one assigned to hide their guns,” he said. “But I didn’t join in their felonies, I  was just their alalay.”

When Castrillo was  studying at University of Santo Tomas, Boy Golden charged into the College of Fine Arts and Architecture building.

“He stood there holding a gun against a security guard’s neck and was searching for me,” he said. “When students and faculty found out that he was my friend and he was bringing me to a nightclub, my iskolar image turned 180 degrees,” he said.

Although he credits his success to his transgressive creativity, Castrillo said he did not believe that children should be left to their juvenile delinquent ways.

“There are many formulas for success. I guess I was just lucky on my path,” he said.

Sculptures for the auction included “The Extrinsic Form,” “Majestic Growth,” “Blossoming forth,” “The Quintessential Growth,” “The Effervescent Growth” and “Crucifix.”

Aside from his main sculptures for auction, he also created 250 pieces of a limited-edition series of smaller abstract movables, “The Vital Form” and “The Organic Seed,” at a fixed price. These miniature sculptures will be on sale throughout the year as an extension of the fund-raising activities.

HOM was established in 2001. Its inspiration was HandsOn Network in the US.

“For example, someone who is skilled in writing can help us contribute with the marketing materials for HOM, or a visual artist help paint murals in schools,” she said.

Hands On Manila also has volunteer travel programs where successful participants can go to Aklan, Mindoro, Boracay, for activities such as tree-planting, school refurbishing, and teaching the locals.

“Many previous volunteers would go back because of the relationships they’ve cultivated with their NGOs,” Montinola said.

In 10 years, Montinola said she hoped to still work for HOM, and would like the organization to be at the forefront of volunteerism in the country.

“Our primary goal is to become an expert in volunteerism, so that if someone wants to volunteer or even start a new volunteer organization, they could come to us for help,” Montinola said.