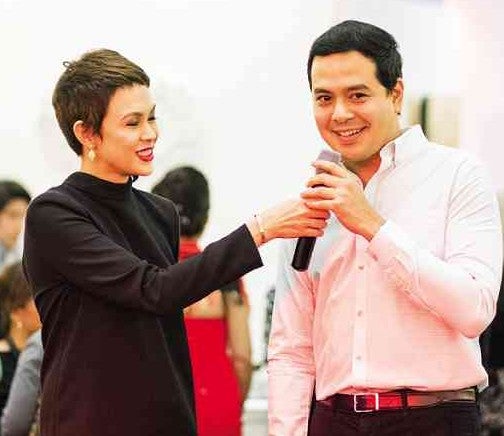 The handsome actor and matinee idol caused a commotion when he attended the gala opening last October 9 of ManilArt 2013 in SMX Convention Center, SM Aura, Taguig.

He made the rounds of the 31 gallery-exhibits, trying to spot items he could hang in his pad and eagerly conversing with artists and gallery-owners.

Composed mainly of art groups based in Manila, ManilArt 2013 boasted the widest collection of Philippine art in a single venue. It served as the Metro’s bridge to art from the other regions.

“We were surprised that people were receptive to art from our areas. Maybe some collectors want something new, something fresh, and not necessarily Manila-centric,” said Jon Kenneth Gotiong of Cebu-based Qube Gallery, which carries the works of artists from Visayas and Mindanao.

Artworks were also set up in various sections of SM Aura to draw mall-goers.

A sculpture installation by Impy Pilapil at top of the SM Aura SkyPark caught the attention of everyone.

This year, ManilArt also made it easier for audiences to feel at home by installing lounges of the SoFA Design Institute. Mabuhay Restop’s Mabuhay Art Café served refreshments.

The gala night, which was primarily for sponsors, exhibitors, media and the diplomatic corps, saw brisk sales.

“This year, I find a lot of young people, young businessmen going around; and because of the great awareness on the art fair, more and more people are interested in knowing who are the great masters and the upcoming artists who are doing well in international and local auction houses,” said Silvana Ancelloti-Diaz of Galleria Duemila.