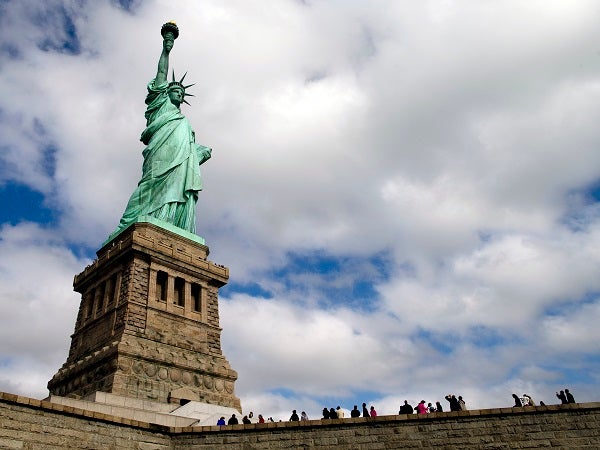 NEW YORK CITY – The Statue of Liberty was back to her shining best Sunday, reopened to tourists for the first time since falling victim to the US government shutdown two weeks ago.

Basking in glorious autumn weather, American and foreign tourists thronged Battery Park, excitedly taking pictures and streaming on and off boats taking them to the emblem of the American dream .

“It was amazing,” said Erick Lira, 28, a businessman from Brazil on holiday with his girlfriend. “It’s fantastic.”

The couple said they were over the moon to discover that one of the most iconic monuments in the United States was back up and running Sunday, saying they booked their tickets online instantly.

Like many others in the park, they had little interest in the cause of the shutdown— ideological battles between President Barack Obama and House Republicans over the US budget and the country’s debt.

Mildly disappointed that the partial reopening had not extended to Ellis Island, they happily headed off instead to Ground Zero, the memorial to the 9/11 attacks on the World Trade Center.

Liberty Island reopened until October 17 under a deal between the National Park Service and New York State, which donated around $370,000 to keep it operating and partly offset trade losses.

The National Park Service announced other deals with the states of Arizona, Colorado and Utah to reopen tourist sites closed since the US government partial shutdown came into force on October 1.

“Statue of Liberty is open!!” said large banners unfurled for the benefit of passing traffic on the main road leading to the pier.

Translator Marco Bedoya, who speaks six languages and works for Statue Cruises, the company that takes visitors out to the island, beamed as he strolled outside the ticket booths.

“People are happy, people are asking me questions,” he said.

The company had been forced to offer pre-booked visitors an alternative boat trip round New York harbor, not always popular, or money back when the Statue was closed, but now things are getting back to normal.

“Business now is so much better than before,” Bedoya said.

While tourists who booked months ago were turned away by the shutdown, many Sunday had booked online, spur of the moment trade for what is a long weekend with Columbus Day on Monday.

Renee Hockenberry, on holiday from Buffalo with her family, said they had decided celebrate her son’s girlfriend’s 18th birthday with a visit to New York.

“Excited” and “just happy” were the words she used to describe their feelings at the Battery Park pier in southern Manhattan.

“We thought it was going to be closed.”

The shutdown hit the Statue of Liberty particularly hard, as it was also closed for eight months after Hurricane Sandy last October.

Alex Berger, a 47-year-old investment banker from Germany, and his partner Vanessa said they also felt lucky to see the statue before flying home on Wednesday.

The $17 visit was “one of the highlights” of New York, Berger said before heading off to take in the sights of Wall Street.

More than 400 federally managed tourist sites have been closed by the shutdown.

The stalemate is costing $152 million a day in lost travel-related activity, affecting up to 450,000 American workers, according to the US Travel Association.

Tour guide Jack Stanley swept through Battery Park just after lunch Sunday en route to the pier with a group of trailing holidaymakers.

“It’s good,” he said. “It should be open. It was silliness by everyone in Washington being a prima donna.”