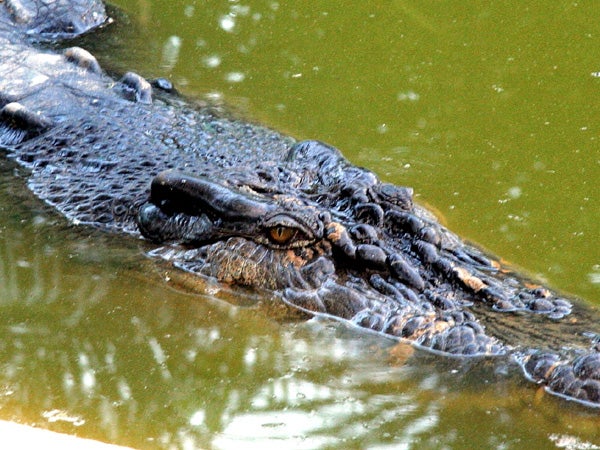 “Killer croc” is not exactly how local wildlife conservationists would describe the reptiles that naturally thrive in the rivers of Palawan, generally considered one of the few remaining habitats of crocodiles in the country.  Even if one such creature actually attacked and devoured a fisherman last June 22.

Edwin Lucero, 35, was recovered at dawn by a team of crocodile hunters who staked out traps along the banks of the Rio Tuba River in Bataraza town, at the southernmost tip of Palawan. Lucero had gone missing the day before.  The search party eventually found the crocodile in the deeper portion of the river gnawing at the fisherman’s lifeless body, and reportedly had to ward off the reptile with flashlights and sticks before it let go of its prey.

Authorities have determined that Lucero was attacked while he was hauling illegally cut lumber that he had stored in the river, known among the locals as crocodile territory.  Allaying fears of possible similar attacks in the area, they hastened to explain that such occurrences are rare.

“It was an isolated incident,” said Alex Marcaida, an official of the Palawan Council for Sustainable Development (PCSD).  “For the past 11 years since we began implementing the Wildlife Conservation Act, there were only three cases of attacks that I can remember.”

Marcaida observed that common to all recorded incidents of crocodile attacks was the factor of habitat disturbance. In an earlier case recorded in Rizal, another Southern Palawan municipality, authorities discovered that the mangrove habitat had been severely destroyed by the illegal tanbark trade.

Crocodiles are not known to be naturally aggressive towards humans but will not hesitate to attack if the latter venture into crocodile territory as prey.

“They don’t go out of their shelters to hunt human beings for food,” explained Dr. Glen Rebong, who heads the Palawan Wildlife and Rescue Center (PWRC).  However, he added, based on their investigation in the village where Lucero was attacked, which is  right along the Rio Tuba, the crocodiles have regularly stalked and attacked livestock and pets in the communities.

“There have been no cases of attacks in areas where habitat have not been disturbed or have not been intruded into by communities. Only sightings, but no human attacks have been recorded,” Marcaida said.

In the few cases where a crocodile has been designated as a “killer croc,” the PWRC takes on the dangerous task of trapping the animal to isolate it from the human population.  “Initially, we had a hard time explaining [to the local folk] the need to capture the croc alive and save it,” Marcaida said. “Kadalasan gusto ng mga tao katayin na. Galit sila [After a crocodile has attacked, the people get so angry they want to slaughter it].”

At the Crocodile Farming Institute in Palawan’s Capital, Puerto Princesa City, which draws over a hundred thousand tourists a year, the skin of a 19-foot crocodile that was the first killer croc ever recorded in Palawan is on display in a huge glass case.

Rebong and his staff of 20, however, do not spend as much of their time catching killer crocs as trying to propagate crocodiles at the PWRC – and looking for farmers willing to venture into the lucrative business of tanning.

“Crocodile farming is a tool of conservation, as it helps in the effort to promote awareness and support interventions to conserve the population in the wild,” Rebong said. Salt water crocodiles, which are being propagated for farming, are not internationally categorized as endangered as they are found in the entire Indo-Pacific region.

Palawan is a known habitat of the Philippine crocodile, particularly at the province’s southern tip, which opens up into the Sulu Sulawesi Seas, considered a migration highway for the saltwater crocodiles of the Indo Pacific region.  Despite this, Rebong admits that still “too little” is known about the Philippine crocodile and that scientific research should be the basis to determine if conservation efforts are being addressed.

As the main government institution tasked to spearhead crocodile conservation in the country, however, the PWRC based in Puerto Princesa City is severely underfunded and understaffed. Since starting out with a complement of 60 staff in the early 1990s when the Crocodile Farming Institute was set up, the PWRC now is down to only 20 staff.

“Our budget, which comes out of the DENR budget has not changed over the years, so we had to cut down on personnel,” Rebong said. “We can’t do all the research with our current budget.”

For now, given its limitations, the most that the wildlife experts and conservationists in Palawan can hope for is the local population’s support for their efforts to learn more and live in harmony with the crocodiles.