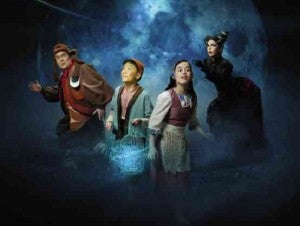 Catch ‘The Bluebird of Happiness,’ now on its final weekend run

MANILA, Philippines—Local theaterdom is abuzz with Trumpets big musical comeback, “The Bluebird of Happiness” which opened a couple of weeks ago at the Meralco Theater. This proudly Filipino musical with book and lyrics by Jaime del Mundo and music by Rony Fortich, based on the Belgian play written in 1908 by Maurice Maeterlinck, continues to touch hearts with its message that teaches families to recognize what true happiness is.

With more than twenty years of theater history, Trumpets is known for its blockbuster musicals for the whole family such as “The Lion, The Witch & the Wardrobe,” and “Little Mermaid”. Other than providing entertainment value, the theater company makes sure that every material they stage has an eternal message that audiences can take home with them.

Both critics and theater aficionados are unanimous with their rave reviews about the show’s entire staging, and performances. Dale Bacar of Broadway World considered the return of Trumpets as a “triumphant comeback”. Blogger Fred Hawson of Fred Said rated it as “world class and first rate”. Inquirer theater editor-critic Gibbs Cadiz thought it was “an enchanting show! (It) makes one truly proud that that it’s a home-grown production”.

More people are raving about “The Bluebird of Happiness” but what makes Trumpets genuinely happy and proud is the reaction of the audience having touched after being reminded of an important truth about the meaning of happiness. A cast member’s friend shared that her five-year old daughter learned that “Things cannot make me happy and we should share and not fight.”

Trumpets is also elated that a lot of kids have come back to see the show again, singing the songs and quoting the names of the characters and their memorable lines. Trumpets, Inc. president, Audie Gemora said, “we are truly blessed to see the overwhelming response of the audience and how the material has affected them. With our limited run, we wish more people could come and see it and be touched by the valuable message this fantastic show has to offer.”

“The Bluebird of Happiness” tells the story of two poor children, Mytyl and Tyltyl who go on a magical adventure in mysterious lands, meeting fantastical characters as they try to find the bluebird of happiness that will make their life happier.

Trumpets returns with splashy new musical ‘The Bluebird of Happiness’