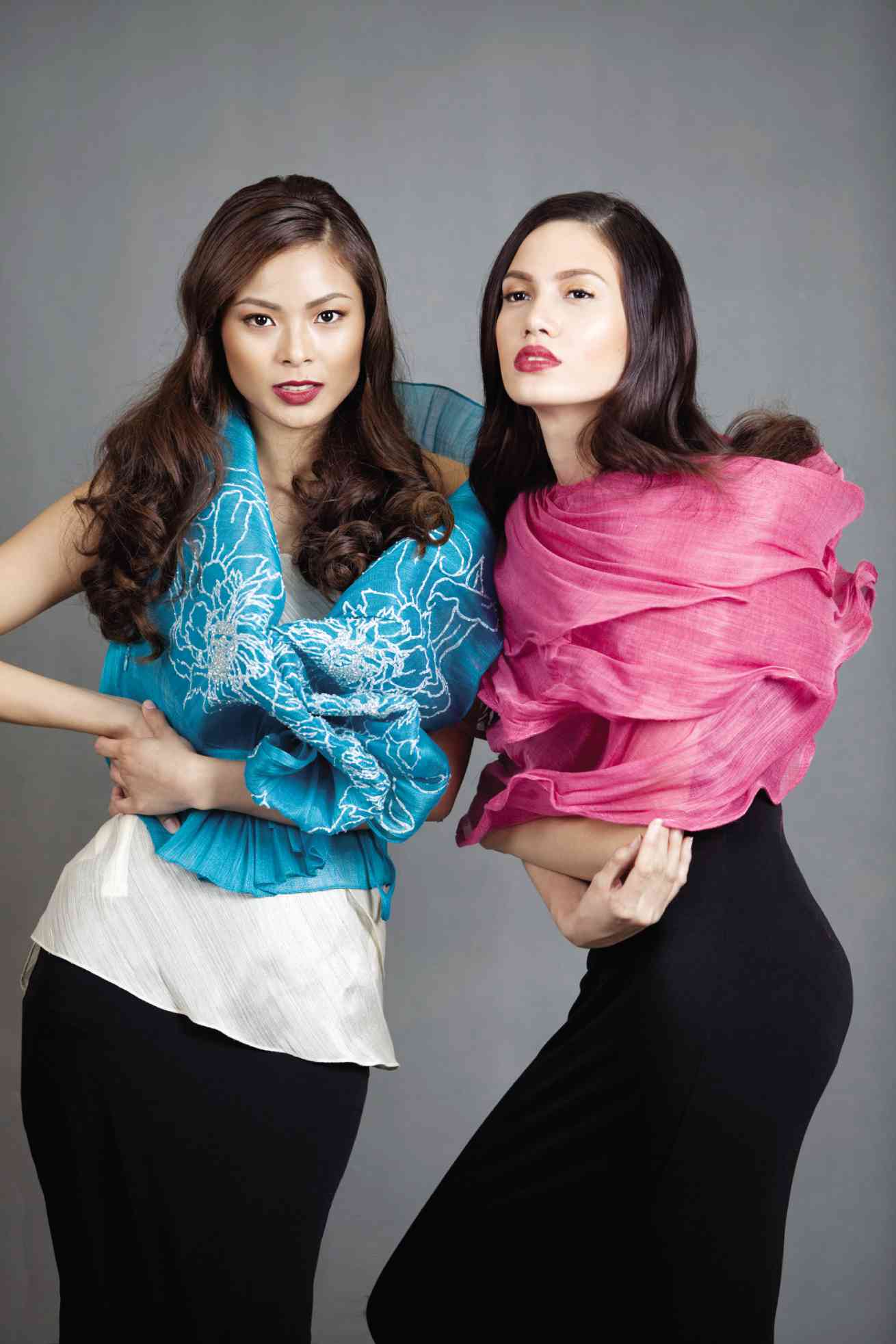 Filipino fibers with flair are set to wow Italy

Gone are the frumpy maria claras and the milk-and-toast barong and black pants. Designers are giving Filipiniana a new spin with looks that range from structured to urban and bohemian.

Their fashion statements will be presented in a special show in Italy. “Fibre Filippine (Piña-Abaca-Banana) Go to Rome” is being shown Oct. 17-20 at the Aranciera di San Sisto, Via Valle delle Camene.

Organized by the Philippine Embassy in Rome, with the European Network of Filipinos in Diaspora, the event aims to educate the younger generation of Filipinos on the Filipino heritage.

The show features the collections of five designers specializing in the innovative use of indigenous fibers.

Growing up in the province, Renée Salud was fascinated with the colorful costumes of folk dancing.

With his background in ready-to-wear and advanced studies in draping and pattern-making, he adopted modern techniques in making Filipiniana clothes.

“I made a modern interpretation of the maria clara with a Japanese structure,” he says. He added volume and shape to the piña mini skirts. They’re matched with tops and panuelos (scarves) using faggotting, a decorative sewing technique that fuses two pieces of fabric with open stitches.

Twinkle Ferraren’s training at  Central St. Martin’s in London taught her to think out of the box. She was exposed to local fibers while working for Dita Sandico.

Ferraren became known for  shifu, a fabric made from paper.  More famous for swimwear, she would create cover-ups and overlays using piña.

For Italy, she worked with artisans from La Herminia, the oldest piña weaving center in Aklan, and T’boli weavers for tinalak.

Ferraren uses native fabrics to create a hip, urban look. Her color palette has dark green—sourced from natural dye from the talisay tree—orange and purple.

Tinalak is used in strips for contrasting accents.

Ferraren’s concept is to mix and match separates so that natural materials can be slowly added to the wardrobe.

Patis Tesoro is known for her fastidious hand work and fabric manipulations using rich local fabrics, such as Mindanao silk and piña.

The proportions of her clothes flatter women with full figures or imperfect proportions.

She has been crusading for the revival of piña weaving.

“My look is Bohemian Filipiniana, more easy to wear, lighter and fun. It still has all the elements of piña, embroidery, callado and embellishments that are intrinsically Filipino,” she says.

“But there is less beading and lighter embroidery. I used the traditional layering of the kamison, anaguas, baro’t saya as choices to wear all together or not.”

The piña sleeveless kamison can be worn either as inner wear or outerwear and paired with baggy Moroccan pants that are similar in silhouette to the drawstring cotton saya.

Dita Sandico was driven to pursue her heritage by making clothes out of the inabel from Ilocos Sur. She then experimented with combining piña and linen to make contemporary Filipiniana.

Known as the “Wrap Artiste” of the Philippines,  she collaborated with weavers from Catanduanes, and came up with her signature “banaca” (a hybrid of banana and abaca).

This material is stiff enough to form loops and swags, yet is soft enough to follow the contours and movements of the body.

Sandico created wraps in various patterns that could be worn as tops, skirts, jackets, dresses, collars or poufs.

Coming from a family of weavers of hablon and piña, Visayan designer Jaki Peñalosa made an impact by using traditional fibers in a contemporary fashion. Her clothes have streamlined silhouettes, asymmetric lines and modern layering.

US-based designer and textile technologist Anthony Cruz Legarda combines the romance of Philippine fashion with the practicality of the American look. He works with Filipino artisans to weave his fabrics and to make his characteristic bold embroidery.

Legarda uses native fabrics on foreign or western clothes such as the Nehru jacket, tuxedoes and mini skirts.

The Philippine abaca industry provides employment for more than 1.5 million Filipinos, from farmers to exporters. In the past decade, it has earned over $89 million annually from exports.

Piña, a delicate fabric used for luxury wear, has been experiencing an irregular production. The highest export volume in 2010 was 3,793 meters.

Experiments on pineapple fiber with polyester have proven that it could be produced in mass quantities.