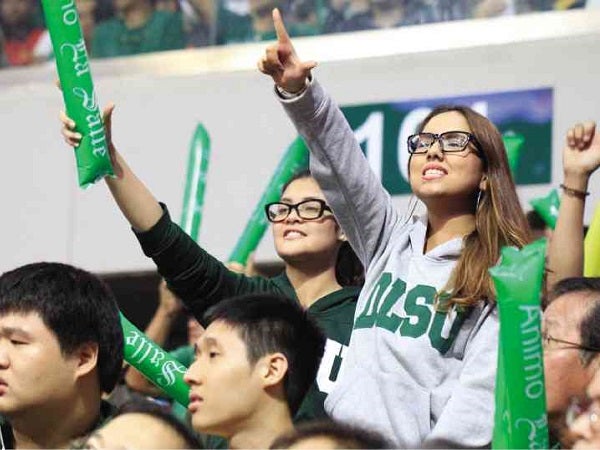 LA SALLE fans at the heat of the game

Game three of the UAAP men’s basketball finals was decided in a way fans of both schools would never forget—only 2 points spelled victory.

Everyone got his money’s worth. It was a game filled with intensity—and respect.

The excitement began way before that eventful Saturday, in the Internet where people huddled and argued.

Actually, a lot of the excitement turned into concern as people were worried about the heavy downpour the night before the game. But much to the relief, if not joy of the people, the weather was very forgiving come game day, enabling people to line up  hours before the 3:30 p.m. spectacle.

People were in their respective school shirts, either UST or DLSU. We spotted only a couple of people looking like they were lost or something because they wore neither green nor yellow.

You felt the tension not just outside the Mall of Asia Arena but also inside the mall where some people were getting some retail therapy just before the attack of nerves.

Right before the start of the game, people queued at the snack bars for popcorn—there were students, alumni, former players and even some celebrities.

A sea of yellow was on one side of the arena, while the La Salle crowd made the upper part of the other side look like it had grown grass.

There was silence until DLSU fired up the crowd when they started the drumming. But not letting them finish were the UST Yellow Jackets who went to war and eventually made their crowd cheer louder than the green school.

Next thing you knew the cheering grew only louder until all the players were on the floor warming up for the game. As the starting five of each team were being introduced, people began cheering for their school, and people in fancy costumes stood out. A couple of people from UST wore tiger-shaped hats.

You didn’t even have to squint to notice people who were somehow hesitant to cheer out loud simply  because they were in the wrong side of the arena—few green shirts drowning in the yellow sea and vice versa.

Every time DLSU started a cheer during a dead-ball situation, the UST crowd would just clap, most of the time louder than the voices of the Archers crowd. It would work every time they did it, when the Tigers knew they had silenced their foes, they would eventually follow it up with the famous “Go USTe” cheer.

La Salle crowd wasn’t drowned out however.   DLSU partisans stood up as their players did a fast run and eventually got the lead. The crowd went wild.

There were no silent moments even during time-outs because fans just could not keep still. The crowd was in for a classic when the nail biter 4th quarter resulted in overtime.

The people in the arena were more than energized to keep on cheering in the additional five minutes of play.

The DLSU crowd finally outdid the clapping tactics of the UST crowd by just chanting the lung-bursting “Go La Salle.”

When the confetti finally rained down and the Green Archers declared champs, the DLSU crowd chanted “Go USTe” along with their rivals, proving that in this UAAP battle, opponents displayed heroic efforts—and respect for each other.