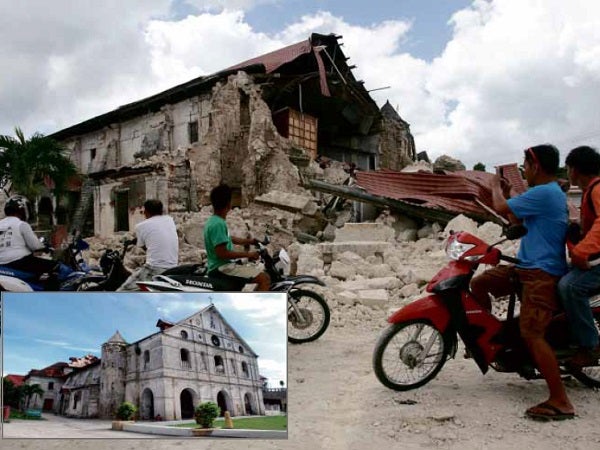 LOBOC Church in Bohol before (inset) and after a 7.2-magnitude earthquake hit the province. Photo by MARIANNE BERMUDEZ and NHCP

MANILA, Philippines—The Spanish Embassy in Manila is exploring ways to help the Philippines reconstruct Spanish-era churches that have been destroyed or damaged in a 7.2-magnitude earthquake that struck Central Visayas on Tuesday.

The embassy announced the effort as it extended its “most sincere condolences and its sympathy” to the Philippine government and victims of the earthquake that also shook parts of southern Luzon and Northern Mindanao.

“We are currently studying different options to assist the Philippine authorities in the reconstruction of the historical churches of the Spanish period,” the embassy said in a statement.

“We will make decisions known as we reach conclusions,” it added.

Spain earlier cited particular concern for the damage to “historical heritage of the Spanish period in the country.”

Spain introduced Christianity to Filipinos through conquest that began in 1521, with several churches built across the country over the next three centuries of its occupation of the archipelago.

Conservation groups, the clergy, state historical and cultural agencies and local communities lamented the damage to the centuries-old Basilica Minore del Santo Niño in Cebu City that lost its belfry during the quake and the 180-year-old Our Lady of Light Parish Church in Loon town in Bohol, which was completely destroyed.

Other centuries-old churches damaged or destroyed by the quake in Bohol are those in the towns of Baclayon, Bauis, Dimiao, Loay, Loboc and Maribojoc.

The old churches have been a source of cultural pride and a driver of tourism in the two provinces.

Other countries have expressed readiness to provide assistance to the Philippines as the country studies how it can reconstruct those churches.

The challenging task of rebuilding heritage