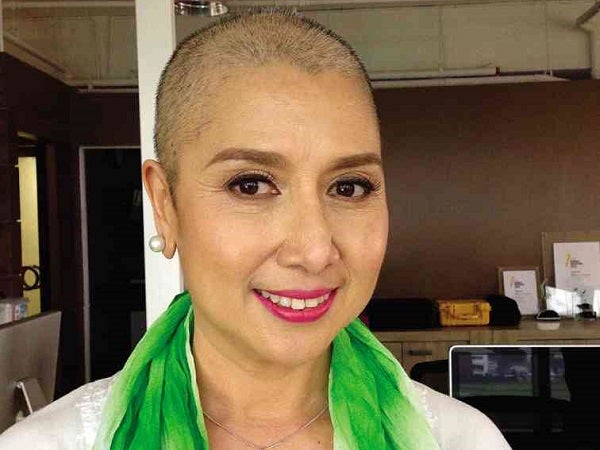 THE AUTHOR, all cleaned up for a breast-cancer advocacy video shoot, with makeup by Pong Niu

How I embraced going bald

The first thing that struck me was how cold it was when a blast of air hit the back of my head. Although I have no qualms about walking around hairless, I have realized those pretty scarves and funky hats are as much for protection as they are for modesty.

And then, you realize how filthy hair can get.

The first time I practiced some dynamic yoga after shaving my head, I was shocked at how the sweat literally gushed like a small waterfall down my face. So you can imagine how much sweat hair absorbs. Think about that next time you get too lazy to wash it. Eeewww.

The fact is, I have always envied women who could get away with pixie hairstyles. At 170 lbs, however, I’m certainly no waif, so I could only sigh upon seeing Mia Farrow (“Rosemary’s Baby,” 1968, in that fabulous Vidal Sassoon cut), or even a stunning, bald Persis Khambatta (“Star Trek,” 1979).

(Okay, so maybe my age is showing, but these ladies were rocking it long before Sinead O’Connor and Demi Moore, so Google them, kids.)

I did cut my hair boy-short a few times, but the enjoyment never lasted because I somehow ended up looking like a bouncer. Thus, even after more celebs went gorgeously bald, it was never an option for me.

Until I got cancer.

Last June 7, I was diagnosed with stage 2a breast cancer. I had a lumpectomy, and was prescribed eight sessions of chemotherapy and a month of radiation.

I am now halfway through my treatment, and doing well.

When my oncologist first discussed the side effects of chemotherapy with me, hair loss was at the top of the list.

“Naku, some people don’t lose their hair,” some well-meaning friends and relatives assured me—I suspect, in hindsight, to convince themselves as well as me that we wouldn’t have to deal with such an in-your-face, dramatic change.

“So-and-so didn’t lose his/her hair when he/she got cancer. You’re healthy, you have such thick hair—malay mo, it won’t fall out,” they said.

I don’t think people really believed me when I said that going bald was the least of my concerns. I was almost looking forward to being hairless and playing with the look.

It didn’t take that long to decide. My friend Glenna, also a cancer survivor, talked about seeing multiple strands on her pillow, and even having a few fly off with a strong blast from an electric fan.

In my case, the shedding started slowly, with strands coming loose in the shower, or getting stuck in my clothes. Then I would catch a few more every time I ran my hands through my hair.

The last straw, pardon the pun, was when more and more strands started falling on my laptop keyboard, and, finally, into my food. You don’t want to see hair in your rice, even if it’s your own.

So, almost three weeks after my first chemotherapy session, I decided to shave my head. Our long-time family hairdresser Ric came over one evening after work, armed with his electric razor.

I remember thinking, “It’s really gone,” as the contraption buzzed painlessly against my scalp; and for a brief moment I was worried that I would really look sick.

My family had mixed emotions; while my already shorn (by choice) nephews hung around to watch, my 89-year-old mother left the room soon after Ric started.

My kuya walked into the room, shook his head and left, too.

Later, a dear friend admitted she cried when she saw my first hairless photograph, which I defiantly posted on Facebook.

It was quite the lesson on how differently the important people in your life react to the things that happen to you, and how people do see cancer and its side effects as something terrible.

The day after, my acupuncturist, Dr. Eddie Concepcion, took a fabulous black-and-white photograph of me with his vintage Hasselblad camera. I posted the pic on Facebook immediately, and a friend commented, “I was looking for the right word to describe you—and it’s ‘commanding.’”

Frankly, I think I did look like I could kick ass!

What are the downsides?

Well, there’s the waterfall I mentioned. The chemotherapy has wreaked havoc on my body temperature, so when I suddenly heat up like a steam engine and my whole scalp breaks into a sweat, everybody can see it.

My accessory du jour is a face towel—I have to carry one wherever I go to wipe my head, because handkerchiefs don’t cut it anymore.

Then, you can’t hide anything—not the smallest irritation, spot or scratch. A few days ago, I clumsily slammed into a window grill, and was horrified at how I could actually feel an ugly bump rise under my fingers.

I staggered into the house, and my family went berserk at the dinner table, running for ice, jaws dropping at how awful the bump looked. If that had been hidden under hair, nobody would have stopped eating.

I began to look at my hairlessness as a metaphor for what I had to do at this point in my life, stopped in my tracks by an illness that could kill me if I don’t fight it with all I’ve got.

It was time to stop stressing over the superficial, see everything clearly—and most importantly, accept things for what they are.

That’s really the philosophical equivalent of shaving your head and staring at yourself, unflinching, in the mirror.

Now for the good parts, which are many. No combing, no brushing, no shampooing and endless blow-drying, although I do shampoo or soap my scalp.

Instead of being afraid that I would look less feminine without hair, I looked at it as a challenge to fix myself up, and to prove to the world that I could still look good without my crowning glory.

Out came the killer dangling earrings, and friends gifted me with many more. I searched for organic and natural makeup, and now I hardly leave home without lipstick.

Yes, I’ve been asked if this is a fashion statement. That was before they noticed the face mask which I constantly wear in public places to protect my compromised immune system.

Since I do still have to cover up against the cold and the sun, scarves and turbans came from my sisters-in-law; a US-based friend has knit me the cutest beanies. My assigned driver/yaya, Nestor, a retired Marine, even gave me a camouflage Marine cap that has become my ultimate “military look” accessory.

Wearing a wig was never an option, because I knew from theater experience that it’s the most uncomfortable thing, and I looked at it as a cop-out. When a dear friend’s mother, a cancer survivor herself, sent me one, I didn’t have the heart to refuse it—but I did ask permission to pass it on to someone who needs it more than I do. (If you do, let me know here in Inquirer Lifestyle.)

Ric shaves my head every two weeks, because when what’s left of my hair grows out, the bald patches are more visible.

I start on my next four chemotherapy sessions in a couple of weeks, with a different medicine which, survivors tell me, will probably finish off what’s left of my hair, and may just claim my eyebrows and eyelashes, too.

Now, I’m pretty attached to my eyebrows, but with the makeup available nowadays, I’m not that worried.

I knew I was home free when my friend Cathy Babao invited me, with fellow breast-cancer survivors Michee Cadhit and Patty Balquiedra, to appear in an advocacy video for a moisturizing product usually recommended by doctors for women undergoing radiation, to protect the skin of the breast.

I was thrilled to get made up by Pong Niu, and the photo of the cleaned-up, prettified me, which I again posted, got so many wonderful comments, I was grinning for days.

(See Michee’s and Patty’s thoughts on going bald on the next page; both ladies looked fabulous hairless, have recently completed their treatment, and are now cancer-free. Woo-hoo! Also, do check out the video, launched last Friday, on YouTube: www.facebook.com/PhysiogelPH)

One friend’s comment was the icing on the cake: She said my new look made her feel like “shaving my head NOW.”

My heft notwithstanding, it looks like I’m going to be an unlikely pixie for a while.

“My hair started shedding exactly two weeks after my first chemo. I realized that no matter how prepared you are for it, you’d still be a bit freaked out. So, my husband had my head shaved right away by his barber.

“That was the best thing I did, because I hardly noticed the rest of it falling out. I used bandanas and hats. I didn’t want to look like my bald husband, kasi baka akala nila may ka-HHWW (holding hands while walking) siya na guy, haha! To keep my confidence, I always put on lipstick and kilay.”—Michee Cadhit, customer service manager and cancer survivor

“I surveyed my head in the mirror and thought, ‘Ang ganda ko pa rin!’ Haha! But seriously, I was amazed because I had never seen my head, and it was so round and peklat-free! I didn’t get depressed at all that I lost my hair. I really enjoyed looking so astig. There was very little fear; in fact, inunahan ko. Even before it started to fall off, GI Jane na ako!—Patty Balquiedra, entrepreneur and cancer survivor