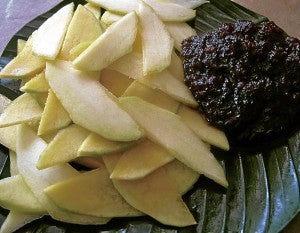 MANILA, Philippines—The Food and Drug Administration warned the public on Tuesday about processed food products it tested and found positive for rhodamine-B, a cancer-causing substance found in dyes used as tracers in water and air flow studies but whose use is prohibited in food preparations.

In an advisory posted on its Web site, the FDA said that three out of the 34 samples of food products it tested for non-permissible colorants were found to be positive for rhodamine-B. The three products were found on sale in Cebu.

But except for a brand of shrimp paste labelled 7C’s, it did not identify the brand names of the two other products, namely “icing candy” and “red gulaman” or red gelatin bars, identifying only the places from where it obtained the samples. It said the candy came from Cebu Crown Grocery, the red gulaman from Carbon Public Market, and the shrimp paste from Robinson’s Grocery in Talisay, Cebu.

Neither did it say what action it had taken to remove the products from the shelves.

“The food processors of the three products are in violation of the FDA Act of 2009 (Republic Act No. 9711) and the Consumer Act of the Philippines (Republic Act No. 7394) on adulteration of processed food,” said FDA acting director general Kenneth Hartigan Go.

He added that the FDA Act of 2009 requires all locally manufactured and imported processed food products to be registered with the FDA.

“This requirement is in addition to the permits issued by the local government units (LGUs) and other government agencies,” he said.

Rhodamine B is a fluorescent dye used as a tracer in water and air flow studies as well as in molecular and cell biology studies. It is a powder with colors ranging from red to violet and has been shopwed to cause cancer in mammals.

Meanwhile, the FDA said that five other products tested need further confirmatory tests for the presence of NPC Sudan, a dye that is used in shoe and floor polish, solvents, oils, waxes and petroleum products. Its use in food preparations is not allowed because the dye is not permitted for use in food because it is toxic, carcinogenic, and likely contain metals like mercury and arsenic.

According to the FDA, the samples it tested were collected from ambulant vendors, public markets, groceries and supermarkets in the National Capital Region and Central Visayas.

“Most of the samples were unregistered and non-compliant with food product labeling standards,” said Go in the advisory.

“Please read labels. Look for FDA registration numbers. Ingredients should be indicated. Look for a consumer hotline. Check expiry dates. If in doubt, contact and coordinate with the FDA Field Food and Drug Regulatory Officers who will conduct inspection or testing,” Go said.

He added that the FDA has also tapped the help of the Centers for Health Development and local government units in implementing the confiscation and recall of products or closure of establishments found violating the law.

Sugar is the main fuel source of cancer