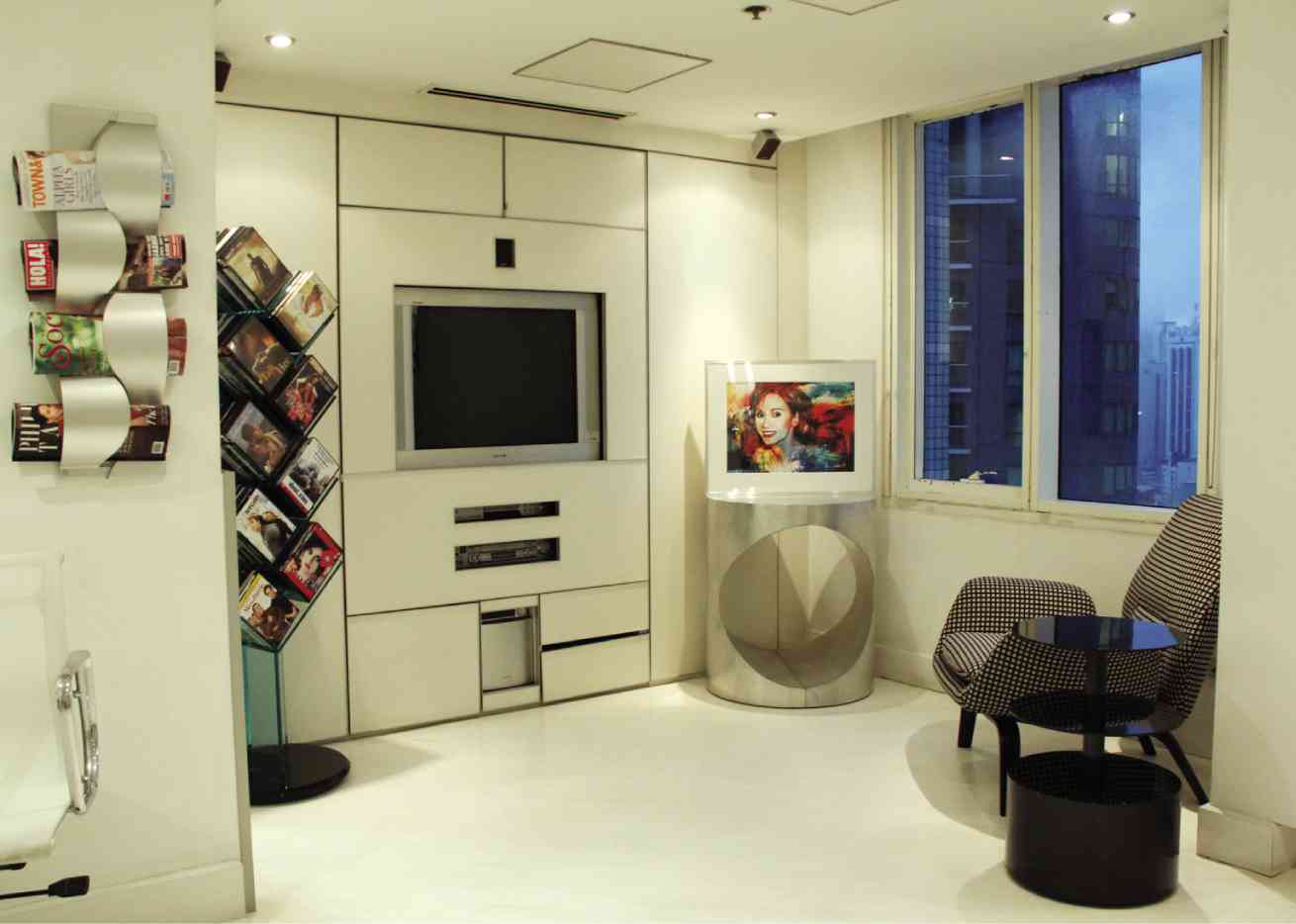 ONE of the entertainment area’s focal points is a “digitalized” photo of Del Gallego done by good friend Evie Roque. Awash in primary colors, the photo exudes an “Andy Warhol effect.”

Why Josephine del Gallego enjoys the lack of color

After having lived in or traveled to all the continents, “except Antarctica,” former banker Josephine del Gallego is guided by “form and function” whenever she builds a house or invests in European-made furniture and accent pieces.

It doesn’t hurt that these pieces, like their owner, are also “fun and fabulous.”

A little over a decade ago, we featured her two-bedroom condo unit designed by architect Ed Calma. Last month, Lifestyle revisited it to find some changes Del Gallego introduced through the years to mirror her evolving taste and lifestyle.

Del Gallego has managed to retain the modern and minimalist flavor.

“Since my home is my haven, it should evoke in me warm feelings,” says Josephine. “It should also provide friends and those dear to me with snapshots of my life.”

But changes were noticeable nonetheless. What used to be an all-white affair with touches of steel and glass now has additional items, including Josephine’s prized high-end sound system, in black.

“Don’t let the lack of color fool you,” she says of her black-and-white digs. “Everything in my home evokes wonderful memories for me. The pieces are also aesthetically pleasing and utilitarian.”

The once pristine narra flooring that came with the unit is beginning to show traces of character. Josephine asked Calma to bleach, sand and stain the floor several times before it was finally painted white.

“It may be white, but it’s low maintenance,” says Josephine, referring to the unit’s floor. “I just use soapy water to clean it. Before, it was so white that some people were a bit intimidated to enter. Now, it looks better and more inviting.”

Even a series of abstract oil paintings by Lexygius Calip along the corridor wall leading to the two bedrooms is bright, neutral and reminiscent of Lao Lian Ben’s minimalist style.

One of the few objects with color is a “digitalized” art piece of one of Josephine’s photos done by Evie Roque.

It sits atop “Cilindro,” a handmade oxidized sculpture by Mauro Mori. Both pieces are displayed in the entertainment area.

To give it an “Andy Warhol feel,” Roque, one of Josephine’s good friends, enlarged and spruced up one of her existing images with bright splashes of primary colors.

One of the artist’s earlier attempts at digitalization can be seen in Josephine’s other picture displayed in the guest room. The candid shot of her was taken years ago during a “Festival of Trees” auction.

Although the artwork is smaller and looks less polished than the one in the entertainment area, Josephine still relishes it because “it reminds me of a happy moment in my life.”

“Five lucky bidders will get a chance to have their photos reinterpreted by Evie in the upcoming Festival of Trees later this year,” says Josephine, who once chaired the annual auction for charity.

Her small home office is still in a niche opposite the entertainment area. Except for one minor detail, everything about Josephine’s contemporary workstation has remained almost the same since we last visited.

While two of three digital clocks above her desk tell the time in Manila and Milan (Italy happens to be one of “my favorite places on earth”), the third clock no longer tells the time in Dubai, one of her ex-husband Ervin Knox’s last foreign postings when they were still a couple.

Instead, it now has the time in the West Coast, where, apart from Josephine’s mother, her three sisters and their families live.

“I told you, everything in this house holds a special place in my heart,” she says.

It was during her extended stay in the US to attend to her sick mother that Josephine, an American citizen, “rediscovered” her adopted country. It was while working as a banker in Los Angeles in the mid-’70s that she met Ervin, also a banker.

Like what she did with her current unit and a number of other houses the world over, she’s now in the middle of renovating a townhouse in Cardiff-by-the-Sea.

Located just outside San Diego, Cardiff-by-the-Sea is a small, charming community reminiscent of Cardiff in England.

“Early settlers saw the resemblance between the two places and decided to call it Cardiff-by-the-Sea,” she says.

Josephine fell in love with the place and, after finding the ideal townhouse, decided to embark on one of her specialties: retrofitting houses to conform with the furniture and accent pieces she already bought or plans on buying.

For Josephine, it has always been like that. Rather than adjust to an existing house, she reconfigures it to adapt to her and her “favorite objects.”

That’s why she needs to fly back to the US before the Christmas rush to oversee the renovation.

“But the first thing I’m going to do when I get to California is to fly with one of my sisters to Louisville, Kentucky, to watch Keith Urban in concert,” she shares.

Keith, Nicole Kidman’s husband? Josephine raises her eyebrows and says in mock seriousness, “Excuse me, I discovered him way before Nicole did.”

“Two of the things I have to do before I move to Venus list, which some people refer to as their bucket list, are to watch country singers Keith and Shania Twain perform live,” she says.

While caring for their mother several months ago, Josephine and one of her sisters managed to take a break by flying to Las Vegas to watch Twain at Caesar’s Palace.

“We had so much fun in Vegas. Now, we’re seeing Keith this November,” she says with girlish excitement.

But no matter what happens, she’s keeping her Metro Manila flat because “I may be a US passport holder, but deep inside, I’m still a Filipina at heart.”

On our visit, Josephine whipped up a pasta dish inspired by her time in Sydney (see recipe).

In honor of the suburb she lived in, she christens her creation teeming with sun-dried Australian tomatoes Neutral Bay Pasta Salad.

To complete the meal, she chills a bottle of Veuve Clicquot champagne to go with a spread of European cheeses, sliced apples, nuts, dried apricots and Philippine chips.

Josephine is unapologetic when it comes to her love of beautiful and expensive objects designed by some of the world’s most celebrated designers. Although she’s into collecting things, she insists that she’s capable of being “detached” from them.

“The only things I can’t live without are my pasta pot and mirrors from Alessi, and my music,” she says. “There was a time in my life I had four Alessi pasta pots. Now, I have only two.”

While living in Thailand, she met Ed Tuttle, architect of the first wave of Aman resorts. From him, Josephine acquired the technology of seamlessly mounting small objects for display.

But when Tuttle learned later on that she planned to mount a number of antique Sukhothai bowls and plates, he wanted to know if she was sure. Of course, she was. The mounted Sukhothai treasures are now displayed in a series of open cabinets in her living room.

“Ed was just concerned that my Sukhothai plates and bowls, like all antique pieces, might lose their value once I started mounting them,” says Josephine. “I told him, it’s okay. I’m not going to sell them anyway. They’re meant for my enjoyment. Like me, they’re here to stay. They’re not going anywhere.”