Egyptian-inspired jewelry, by a Frenchwoman based in Tuscany | Inquirer Lifestyle ❮ ❯ 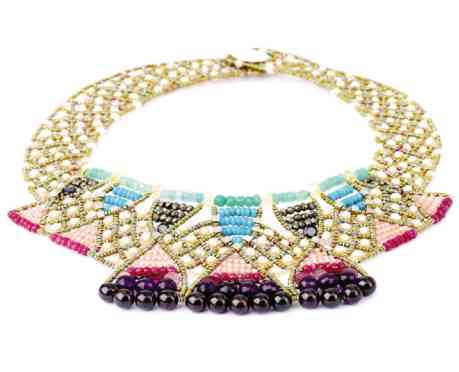 Egyptian-inspired jewelry, by a Frenchwoman based in Tuscany

Elisabeth Paradon dreamed of becoming an archeologist and digging up treasures in exotic Egypt. But in a twist of fate, the Frenchwoman wound up creating her own little treasures in—where else but—Egypt.

The designer and founder of the Milan-based Ziio jewelry was a young rebel in the ’80s went she left her home in France to soak up the world. She wound up in the land of the pharaohs, which renewed her childhood romantic fantasies of search and discovery.

“I was 19 and a rebel,” she said wistfully, at the launch of her line last week, available exclusively at Rustan’s Silver Vault. “I didn’t go to art school. I just wanted to throw myself into life, to laugh and to cry and to discover. Everything happened by chance.”

She began by helping out a friend who made jewelry, not quite expecting to fall in love with the art and craft of jewelry-mak  ing. She learned the centuries-old Egyptian technique of weaving beads and stones into colorful precious ornaments.

“My technique is Egyptian, but obviously I’m not making Egyptian style from 3,000 years ago,” said Paradon, pointing out to her collection of woven and strung trinkets crafted from

Paradon has since traveled the world to find inspiration and new techniques.

“I like to imagine spaces and create colorful spaces. I like the technique I was using but I wanted to go further. If you repeat the same thing you get bored,” she said.

She also found herself in places like Thailand and India. “The places where I’ve stayed and visited, they fill my head with images,” she said.

Paradon, who’s based in the town of Luca near Pisa in Italy’s Tuscan region, designs her jewelry and sends them out to be crafted by women in a poor area in the south of Italy, who work from their homes. Her husband, Patrick Aledo, said he and his wife take pleasure in providing livelihood for the women.

“Money is important, but it’s more about the emotion and passion,” he said. “The women work from home and make something beautiful. I love the human story.”

Paradon and Aledo went to school together as youngsters in France but lost touch for 28 years. He found her via Google and sent her an e-mail. They married about a year ago, and they’ve settled in Tuscany with their children, two each from previous relationships.

Aledo had left his IT company to manage his wife’s business. He acknowledged that the work is “so different, but it’s also so beautiful.” He shared that Ziio—a name given by an ex-boyfriend of Paradon—is now sold in Japan, the United States, Thailand, Australia, Turkey, Kazakhstan, United States and all over Europe.

“I saw the enthusiasm of my Italian customers, and I found Italy to be a good place for me to work,” Paradon said of her move. Ziio’s showroom is in Milan. Aledo also raved about the

quality of life in temperate Tuscany.

In Egypt, Paradon started her line with ceramics, a decidedly cheap material for an upstart designer. In Italy, she found another cheap material: glass. From there, she began incorporating semiprecious stones.

“I want my creations to be affordable so I can touch more people. If I’m just working with gold, I have to lock everything up, and I don’t want to live that way in constant fear.” But she does work with gold on occasion.

She sources her materials from all over: silver from Indonesia; freshwater pearls from China; turquoise and lapis from Afghanistan; wire from Germany.

“I search for materials, and make matches when I design,” she said.

But for her last collection, called “Geometric,” she designed the stones herself, a process that she wants to do from hereon.

“I used bigger stones, I chose the colors and sizes. There’s an atelier in India that made the stones for me. The collection was built around these stones that I designed. I travel with the [ready-made] beads and I get bored because they’re always the same. You really have to create the beads yourself.”

She rolls out two seasonal collections each year, and collaborates with fashion and jewelry houses. She has top-selling styles that she brings back every now and then.

Paradon has worked with the fashion houses of Christian Lacroix and Missoni, and Queen Rania of Jordan has been photographed wearing Ziio jewelry.

“I’m happy with what I do,” Paradon said. “Everything is made by hand. I have a niche that’s very aware and sensitive of my products, even if they don’t match the seasons.”