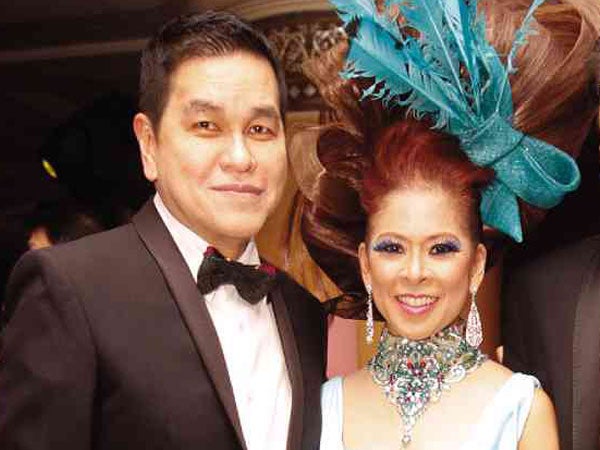 Red Charity Gala, by choice and by design

Trust Tessa Valdes and Kaye Tiñga to outdo themselves each year for their Annual Red Cross Ball, now renamed the Red Charity Gala. This dramatic and dynamic duo knows how to pickle a party with champagne,  chocolates and high-fashion showstoppers, all for charitable causes. Each year’s edition is more glorious and rollicking than the last one.

Makati Shangri-La was the majestic setting for the fifth annual blockbuster ball last Saturday night. Without a doubt, this is the most awaited fête galante of the season, a chance to give unselfishly to a cause that helps improve the human condition in this part of the world.

At the grand lobby, one was greeted by a giant image of Bench’s new fragrance, Zoe by Ezra Santos, made entirely of white chrysanthemums. His fall-winter couture show was the highlight of the evening. Santos is part of the group of Filipino designers that made their  name in the Middle East, among  them Michael Cinco, Furne One and Cary Santiago; all three had shown  their own collections in previous Red Charity galas.

For Manila’s 400 who showed up bejeweled and spectacularly dressed and ready to give to the Red Cross, the party had a laid-back, more democratic vibe, with many  of the  guests from fashion, politics, the diplomatic corps and show biz ending up tipsy and talkative.

On long tables in the all-black Rizal Ballroom, siblings Ruffa and Richard Gutierrez schmoozed with Sen. Sonny Angara and lovely wife Tootsy, who were aware that in wartime the Red Cross is always the first to reach out and donate blood to victims. Table-hopping Franco Laurel and Agile Zamora were taking instant memories on their Instamatics.

Red Cross red were the gowns of Marivic Rufino, who came squired by her fiancé, Argentinean diplomat Miguel Realmonte; and Crystalle Henares, without her Scottish BF. Nicole

The creativity that Tessa and Kaye employed to produce the most well-attended dinner and fashion event in town deserves commendation. For charity, they did live hosting and heckling to cajole, extort and loosen the purse strings of the well-heeled guests, who were just too happy to be pounced on. Eventologist Tim Yap and Tessa started the evening with raucous hosting; by the end of the evening, they had raised a considerable amount to fund the Red Cross.

Collectible items included a Lancel bag, Tumi luggage, trips to Balesin and Bali, and Jewelmer pearls that made the women sit up and take notice. Some of the winning bidders were Paolo Prieto, Jean Henri Lhuillier and Derek Ramsay. Funds from this auction will go to the relief efforts for the victims of the earthquake in Bohol and Cebu.

Then the lights dimmed as tall foreign male models in different stages of undress strutted onstage, it was a mini Bench underwear and exclusive outerwear show by Santos, styled by Noel Manapat and executed by Joey Samson. The Ezra collection made use of a brand-new techno fabric called crepe neoprene, traditionally used for deep-sea diving suits. Its infused rubber gave the designer the chance to do sculpted looks without boning or padding, thus achieving for the collection an airy parade of bouncy gowns.

The fabric is warm enough for a winter ball but definitely not for Manila. Still, some eager matrons still bought Santos’ beautiful white satin structured gowns, digitally printed with faceted ice cube-size Swarovski crystals that festooned the gown like icicles in winter.

Santos said he was inspired by the period when Art Noveau was turning into the more geometric, spare, stark Art Deco. So the gowns had free-flowing curlicues of soft beading and tendrils of embroidery, while a number of stunning metallic pieces evoked Japanese armor. The autumn-winter collection, meanwhile, was inspired by Santos’ companion cologne Rumie, which means “whiteness” or tender shades of pale.

Let us all keep donating to the Red Cross. It is such good karma for us all.