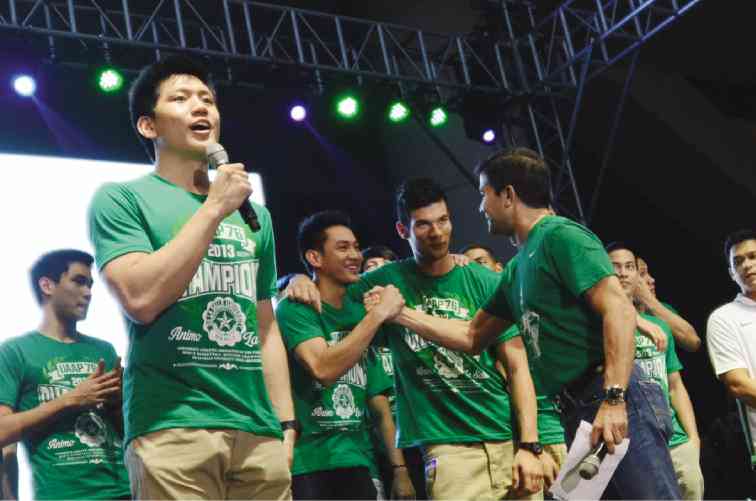 JERON Teng giving a speech to the crowd

It was the moment all La Sallians had been waiting for. After six painstaking years, the basketball championship crown was back in Taft. Last Oct. 17, La Salle students and alumni gathered to celebrate the victory.

The thanksgiving day started with a press conference in which the varsity players thanked everyone for the love and support they had received.

The press had a chance to ask the players a few questions. One of the organizers told us that the championship game could be one of the most watched finals matches in UAAP history, going by the sold-out tickets and the trending on some social media sites.

Following their victory, La Salle players have been appearing in the broadcast media. “After a few guest stints on shows, they’re kind of tired already. I said it’s better to feel tired doing that than staying at home,” said Juno Sauler, who on his rookie year of coaching La Salle got the championship trophy.

The coach’s quiet demeanor and humble stance got the attention of some social media sites, resulting in several hashtag memes such as #InJunoWeTrust  and #JunoFace.

Since the start of the UAAP season, La Salle had been tagged as an underdog. Defying the odds, it scored wins and made a huge contribution to its No. 1 overall ranking for the first half of Season 76.

The players had other motivations for becoming victors. “We took it one game at a time. Our motivation was to get better, day by day, as a team,” Arnold van Opstal said.

The Animo Night victory party paid tribute to the basketball team and other La Salle athletes.

Most memorable part was the chanting of “Go USTe,” a sign of honor and respect for La Salle’s championship rival, the University of Santo Tomas.

The event was hosted by celebrity alumni such as Edu Manzano, Aaron Atayde, Slick Rick, Tin Gamboa and RJ Ledesma.

The party people were expecting a bonfire but it did not happen. Instead, there was a ceremonial lighting of the torch to the athletes playing the next half of the UAAP season. “We won’t have a bonfire, but let the Animo burn in our hearts,” said Bro. Ricky Laguda, FSC.