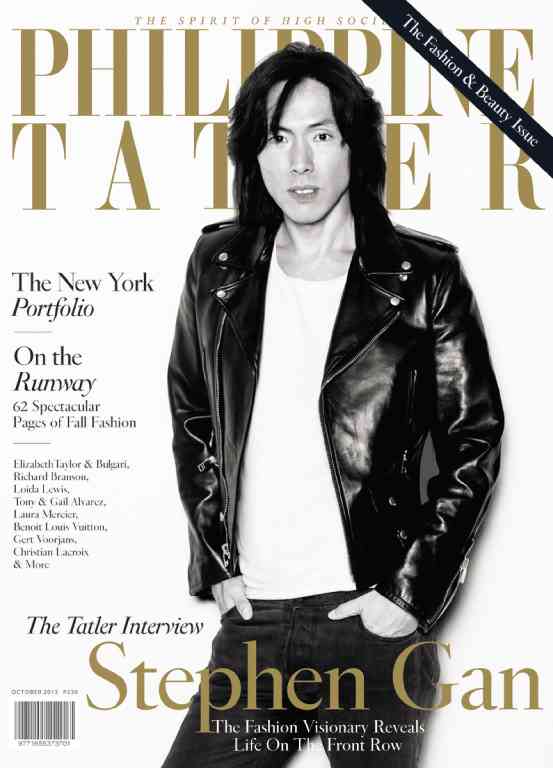 Stephen Gan and 29 other successful NY Pinoys in the spotlight 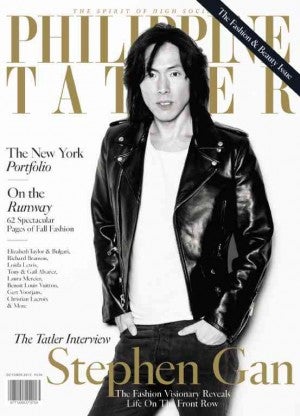 This is one of the most memorable and enjoyable trips we have had in a long time. To be able to mix work and holiday together, and with the city of New York as our backdrop, is truly a luxury.

New York is constantly evolving, such that producing the October issue of the Philippine Tatler was both exhausting and exhilarating. Our only regret is, even with so many pages and frames, the words and photos were simply not enough to capture all the sights and sounds of this pulsating place.

Fashion visionary Stephen Gan, who graces our cover, is an elusive interview subject, but through the New York-based photographer Joseph Chen, Gan agreed to be photographed in his Manhattan office.

Gan is one of the most influential fashion icons in the world. He is the creative director of Harper’s Bazaar; the founder and creative director of V and V Man magazines, as well as Visionnaire (an art and fashion limited-edition album); and the design director of CR Fashion Report (the magazine of Carine Roitfeld, the former editor of French Vogue).

In our massive New York portfolio, we are featuring 30 successful Filipinos who all took time off to be photographed and interviewed in their favorite spots in Manhattan.

There’s Patricia Zobel y Urquijo (working for Tom Ford cosmetics) in front of a graffiti-filled wall in Brooklyn; Maria Pineda (international sales executive, Mandarin Oriental NY) in Central Park; Adam Jacobs and Ali Ewoldt (Broadway actors) in Times Square; Betina Ocampo (a designer recently tagged by Vogue as one of the 11 designers you must know now) in Barney’s, where her popular line of T-shirts is sold.

Then there’s Cristina Valdes (design consultant) in front of the Plaza Hotel. For those who know Valdes when she was still living in Manila, well, she is as outrageous as ever. She arrived in cowboy boots for the shoot. After some minutes of shooting, she said, “What else can I do? I can go inside the fountain if you want me to!”

We were apprehensive that she might get caught. Besides, we won’t get her boots from that angle, we told her.

“I don’t care!” she said. Then she did go inside the fountain. Fortunately, no member of the New York Police Department was around, but the angle, indeed, hid her boots.

One of the most interesting couples we met was Tony and Gail Alvarez. He is a major player in the corporate world, not only in New York but in London as well. He migrated to New York in 1969 merely to follow his wife who went there on a visit. They stayed in a one-bedroom apartment and his first job was as a house painter.

But with the great network of Filipino immigrants in the city, Tony found his niche. And what a niche he has carved with his company, Alvarez & Marsal, a global professional services firm that specializes in turnaround and interim management and business advisory services.

To ensure that his children and grandchildren remain close, Tony built a beautiful home for his family in New Jersey. His life of hard work and perseverance is a “Filipino Dream” worth emulating.

Not a stranger to this magazine’s pages is Loida Nicolas-Lewis, the philanthropist and a force in the Philippine-American community. Her Upper East Side address is filled with precious art, collected by her and her late husband, the industrialist Reginald F. Lewis.

The nine-bedroom apartment is  in front of the Jackie Kennedy Onassis reservoir in Central Park; it offers great views all around and is simply spectacular.

We also were able to visit two more beautiful homes: that of the beautiful Bernadette Cruz Moxey, who balances career and family seamlessly; and of a successful Filipino couple (who shall remain unnamed) whose Manhattan apartment is a beautiful modern residence, but with touches of whimsy via bright colors and exotic finishes, done by the in-demand interior design firm Kemble Interiors, Inc.

Other highlights include a stay in the posh Mark Hotel, meeting up with Manila-based friends who were in the city for vacation like Ricco Ocampo, Sharmila Hiranand, Marianne Po, Charina Sarte, Jing Monis and Bea Zobel Jr., and catching up with other New York-based Filipinos like Lily O’Boyle, Lorrie Reynoso, Stacey Rodriguez, Den Abesamis and PJ Pascual, as well as my cousin Lisa Oca Chrissos and her daughter Zoe.

We were also able to catch the last few shows of “Here Lies Love,” David Byrne’s musical based on the life of Imelda Marcos. And, at the Standard Hotel’s popular Boom Boom Room, I did some damage to my credit card due to the summer sales.

The New York mission would not have been possible without one of our favorite photographers, Frank Hoefsmit. This is our fourth collaboration with Hoefsmit outside the country, enough for us to say that he is a photographer par excellence and a delight to work with.

I am proud of all the issues I have done over the last 12 years, but this one would probably rank in my top 10. I hope you are able to get a copy!