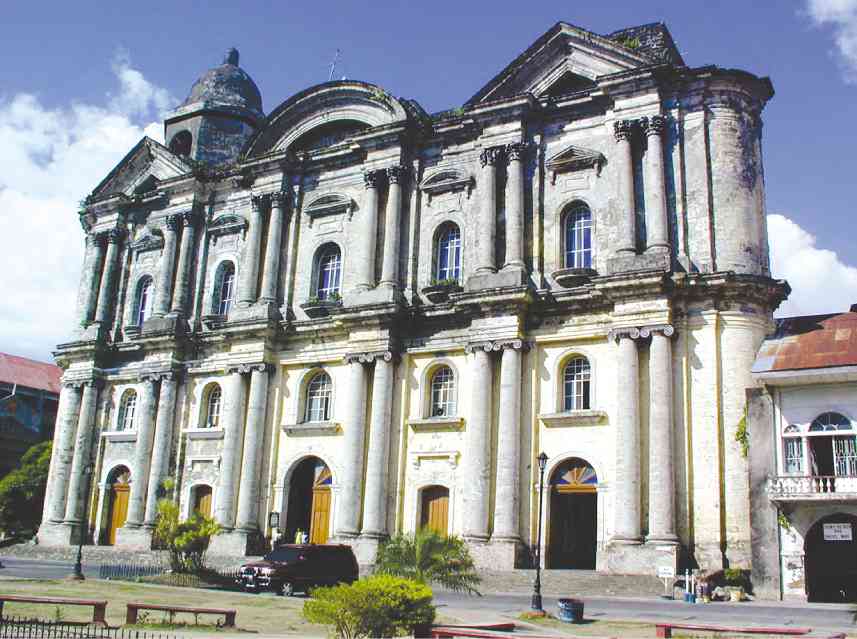 Man, not nature, is destroying the Taal Basilica

TAAL, Batangas—Squinting in the cruel midday sun, a handful of construction workers carried heavy steel bars to the left side of the Basilica San Martin de Tours, more popularly known as the Taal Basilica, where the ground floor of a new structure was about to be completed.

The men were supposedly building a two-story structure to be called the Jubilee Hall, which would serve as a multipurpose venue for church meetings and social gatherings like wedding receptions.

This building and the adjacent arcade, made to look like ruins of an ancient wall, have become an issue between the church’s parish priest, Msgr. Alfredo Madlangbayan, and famed sculptor and Taal son Ramon Orlina.

On Oct. 1, Orlina wrote the National Historical Commission of the Philippines (NHCP), accusing Madlangbayan of failure to obtain a building permit for the construction of the hall and arcade.

“There seems to be no historical basis for the design of the arcade, and it even protrudes further out than the façade of the basilica, which should not have happened,” Orlina complained.

He also feels “the beauty and grandeur of the basilica has been compromised” by the arcade “designed to look like ruins, even though historically we have no records to show that such a structure ever existed” in the church premises.

Since the Taal Basilica, declared a National Historical Site under Presidential Decree 375, is a protected monument, the new constructions also “diminish… the historical and cultural value of the basilica,” he added.

Orlina, a licensed architect, said the Taal Basilica adhered to “Augustinian architecture” as observed by the order’s missionaries, who built the original church near Taal Lake in San Nicolas town.

The church, first erected in the 1500s and repaired a century later, was destroyed during an eruption of Taal Volcano. Both town and church were transferred to an elevated area in 1755. This is where the basilica now stands.

At 315 ft long and 148 ft wide, Taaleños take pride in having “Asia’s biggest Catholic church” in their neighborhood.

Orlina also took note that the lighting fixtures used around the church “are not of the right era,” as are the tiles on the floor.

Orlina warned that once the Jubilee Hall is finished, “it will crowd the grounds of the basilica and block much of the left side of the church,” as it consumes “a lot of space.”

Had the NHCP approved the construction, Orlina pointed out, Madlangbayan’s workers should have observed the required five-meter space between two structures.  Instead, there is a gap of only about 1.5 meters between the church and the Jubilee Hall, he noted.

The construction has been ongoing for the past two months, the sculptor alleged.

“Nature has spared Taal Basilica from natural calamities like the recent earthquake that destroyed all those old churches in Bohol and Cebu. And yet, here we encounter manmade destruction,” Orlina later told Inquirer Lifestyle on the phone.

Orlina’s letter prompted Diokno to send an NHCP team to Taal on Oct. 11 to inspect the project.

Diokno eventually sent Madlangbayan a letter dated Oct. 16, asking the monsignor to “suspend all construction and development work” until the NHCP has worked out a “formal dialogue” between the “stakeholders” who either favor or oppose the project.

The NHCP chair reminded Madlangbayan that the Taal Basilica is a national historical landmark.

“The construction and development plan (for the Jubilee Hall and arcade) should have been presented to us for our approval BEFORE any construction took place,” the letter added.

The presence of construction workers, as of Oct. 23, when this reporter visited the site, indicated that the instruction was ignored.

Apparently Diokno’s letter means a face-off between Orlina and Madlangbayan. It is a meeting that both men are looking forward to. The sculptor said he got word that the dialogue has been set for Nov. 4 in Taal.

Madlangbayan allowed this reporter to tour the basilica premises, but refused to issue any statement about Orlina’s charges.

“Ramon is my friend. Let’s not talk about it, although I am looking forward to and welcome the dialogue to be sponsored by the NHCP,” was all that Madlangbayan would say on record.

Madlangbayan was installed as parish priest in 2010 and hit the ground running, as far as physical improvements of the church were concerned.

First was the interior paint job. The walls and ceilings were given a grand trompe l’oeil treatment to make them appear as if the paint job was plaster castings.

Orlina said he was enthusiastic at first, and even provided monetary support as an influential member of the Taal Church Historical Authentic Restoration Movement (Taal CHARM).

He said the group raised P3 million for the repair of the basilica.

True enough, the basilica’s interiors now look lighter and more airy, a far cry from the gloomy and cavernous atmosphere it had in previous years.

Orlina said the improvements were fine, although he found the image of Jesus Christ on the dome painting atop the altar depicting the Ascension to be disproportionate to the size of the area.

Orlina said he got distraught when Madlangbayan began tinkering with the design of the altar in 2011.

The sculptor said the original design was patterned after Italian Baroque, and that silver was the predominant metal of the period. He lamented that Madlangbayan had the altar painted a shade of gold that was “too shiny, like Chinese gold.”

Improvements also made the altar more “ornate and French rococo” instead of enhancing the original design.

Orlina also noted that the priest used a shade of brown that was more identified with the Franciscan order “when the basilica’s theme is clearly Augustinian.”

Orlina alleged that Madlangbayan dismissed his observations, the priest saying that the prevalent theme in church design is eclectic (“Halo-halo ang uso ngayon”).

But the sculptor believes Madlangbayan’s efforts are nothing short of sacrilegious.

“We have laws in the Philippines. I am just following the law. There is no building permit in the construction. Anything above three meters in height has to have a structural computation as per law, especially when one is building a second floor,” as in the case of the Jubilee Hall, Orlina asserted.

It did not help that Madlangbayan allegedly told Taaleños that Orlina supports the construction of the Jubilee Hall and arcade.

“Madlangbayan is saying I support his latest projects, and people readily believe.  That’s not the case at all. Only the NHCP can approve such projects. I am not the NHCP. I do not have that discretion at all,” he added.

While Orlina is confident that the NHCP will eventually side with him on the issue, he said his lawyer Sigfrid Fortun had already drafted a petition for a temporary restraining order against Madlangbayan should the priest be allowed to proceed with the project.

Orlina cited an earlier case filed by members of Taal CHARM against the late Bishop José Salazar, who was the parish priest in 2004.

Copies of court documents that Orlina provided showed that, at that time, Salazar ordered the construction of an adoration chapel inside the courtyard of the basilica. Orlina and company opposed the project, saying the NHCP’s predecessor, the National Historical Institute, must first approve plans for the structure.

As plaintiff-appellants, the group said President Ferdinand Marcos’ P.D. 375, signed Jan. 14, 1974, gave the NHI “supervision and control” over the “preservation, restoration and/or reconstruction” of national shrines, monuments or landmarks that included the Taal Basilica.

The group added that the bishop chose an unwise location. An adoration chapel must be accessible to parishioners 24/7. Building it inside a courtyard would require everyone to enter the church’s convent first before gaining access to the chapel.

Once the convent is locked for the night, parishioners could not enter the courtyard anymore, the group argued.

But Salazar proceeded with the construction, prompting Orlina et al. to seek judicial relief. The case dragged on for years. At one point, the Taal Regional Trial Court questioned whether the appellants were “real parties in interest” and sided with the project.

Undaunted, Orlina elevated the case to the Court of Appeals (CA), which reversed and modified the RTC decision on Oct. 25, 2012.

The appellate court ordered the demolition of the adoration chapel. However, Orlina said this order was again amended recently, allowing the chapel to remain where it is, as the CA also stressed that future constructions must first get NHCP approval.

The Supreme Court had also issued a decision earlier this year affirming the CA’s verdict, the sculptor added.

“This is why I cannot understand why Madlangbayan is going ahead with the multipurpose hall. Clearly the court said he could not do this,” he said.

Orlina intends to cite the case against Salazar as a precedent to convince the court that would be chosen to handle his petition for TRO that Madlangbayan should stop the new project.

“We now have the legal precedent that will protect all churches in the Philippines. We already have the experience involving the adoration chapel in Taal Basilica,” he stressed.

“The law is clear that, if destroyed, a church can only be restored. Taal is a special case. It is the biggest church in Asia and has a history. It is pitiful that a new priest arrives and wants to do everything to leave his mark,” Orlina said.

“I’m not doing this to be a hero. I’m just following the legacy of my mother, Paulina Gahol Orlina. She was more vocal than the average parishioner. And during her time, she knew what was heritage and she realized what must be preserved,” Taal’s homeboy added.

Dindo Montenegro, a respected tour guide in Taal, said he is “not happy” with Madlangbayan’s insistence on proceeding with the construction of the Jubilee Hall and the arcade.

“These are undoubtedly obstructions that ruin the heritage character of the church,” he said in a phone interview.

Montenegro, who was among the appellants who filed the case against Salazar in 2004, added that Madlangbayan should have heeded the judiciary’s order for church officials to cease from building new structures following the tiff over the adoration chapel.

“The church should respect the decision of the court and refrain from any further construction,” he added.

“I thought Ramon was behind it, but it turns out he did not know about it. The priest is clearly pushing his personal plans without proper consultation with concerned parties,” Montenegro said.

Orlina said he envisions a Taal Basilica that would eventually make it to the list of Unesco World Heritage Sites.

“But how can we achieve that if we ourselves are destroying our hometown?”