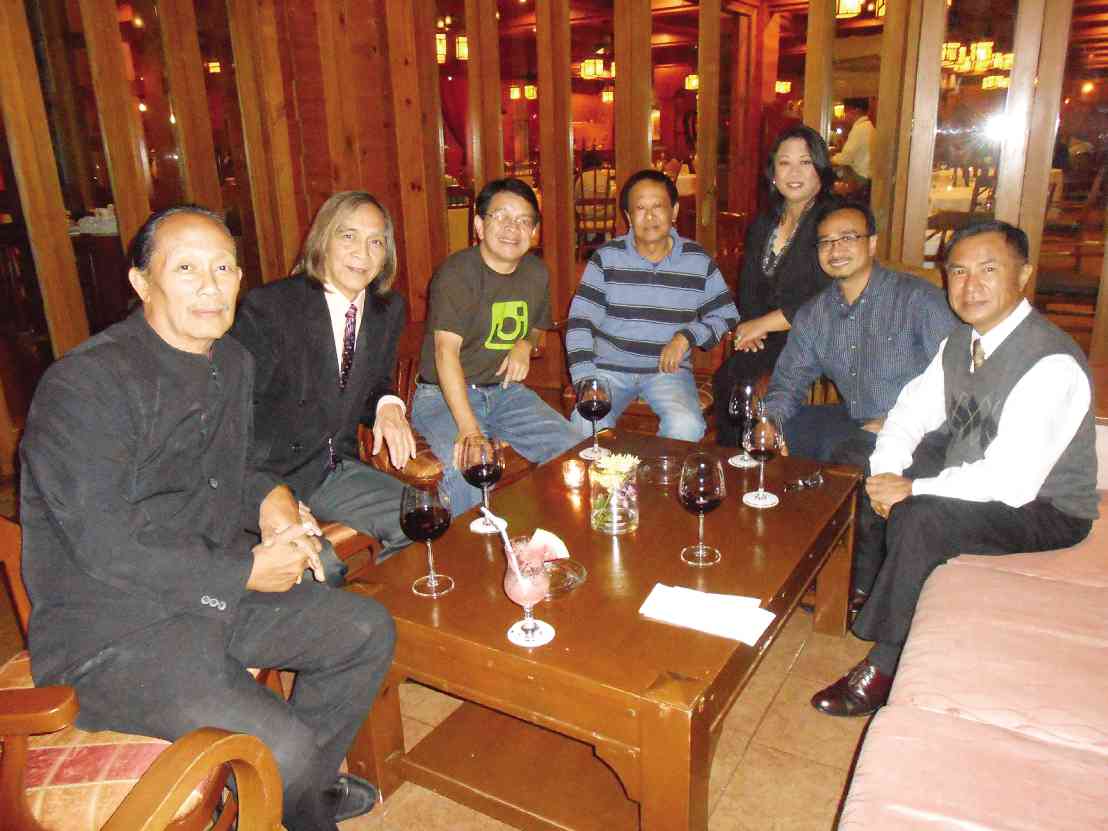 Our first memorable time in Baguio as a grownup was in the late 1980s, when we caught the rock band Blank, with Grace Nono on vocals, in a small club at La Azotea Building on Session Road.

The next few times we went there was in the early ’90s, as co-manager of Yano and Pepe Smith—though we didn’t get to visit another club on Session Road, called Songs Music Gallery, which was said to have a popular jazz group, Fusion, as its house band.

Last weekend we had an opportunity to go to Baguio again, checking in at The Manor in the sprawling Camp John Hay property. Our sole objective was to watch Fusion—the same band that used to play at Songs, but which now performs at The Manor’s Piano Bar on Mondays and Tuesdays.

The band debuted at The Manor in 2002 and has continued playing there since—quite a feat because Baguio’s live music scene is dominated by country and acoustic pop-rock groups.

Another achievement is that Fusion has remained intact since forming in 1992, and has even added new members. The group’s longevity, said its core members, could be traced to their pure love for music. Most of them also have day jobs, which means they don’t have to worry about their low pay as musicians.

In a chat with the band before its Monday night gig, we learned that its members—all born in Baguio with the exception of its bassist—were exposed to music at an early age.

“We used to go to Songs to watch Fusion,” Pia said.

Joanie, an architect, was a member of his school’s marching band and was invited to play in an orchestra at age 12.

Guitarist Ric Maniquis, a photographer, started out as a folk singer before moving on to jazz.

Ron Paraan, an ophthalmologist who joined Fusion as second saxophonist, learned to play harmonica at age 5, the ukulele in grade school, and joined bands while in med school.

Ebb Bareng, an orthopedic surgeon and the band’s third saxophonist, said it was Joanie who taught and encouraged him to play the sax.

Egay Buñing, the band’s bassist, hails from Bulacan and is Fusion’s only full-time musician. He first came to Baguio in 1972 and played in Camp John Hay when it was still an American facility.

Zoella, along with the rest of the band’s members, lead guitarist Ethan Ventura and drummer Jess Brazil, were not around that Monday. Drums are not allowed in the Piano Bar, said Joanie, because it would be too noisy for The Manor’s fireplace setting.

The most striking thing about Fusion is that its members are given solo spots to showcase their respective talents, like a true jazz band. Though Joanie played the lead melody in most numbers, the others got to shine, too.

Pia was an earthy revelation in “Bridges” and “If I Ain’t Got You”; Ric did a wistful rendition of “Shape of My Heart,” and later, a playful version of “Feel Like Making Love”; Ebb and Joanie engaged in a double-sax jam on “Doc”; guest guitarist Ian Acosta was a bright presence throughout; while Teddy and Egay kept the rhythm tight and steady.

It was wonderful to hear Joanie channeling David Sanborn in “Carly’s Song”—bringing back good times in our teenage years.

There was a full-house crowd on this night. Many of them are friends of the band; some even jammed onstage, including a family of Baguio musicians on vacation from its club engagement in Thailand.

The red wine swirled through our head, triggering a sense of euphoria as the music kept playing from 9 p.m. till midnight.

Near the end, we scribbled a request on paper napkin: “Birdland,” either the original Weather Report composition or Manhattan Transfer’s vocal version. Egay proceeded to play the song’s opening chords, even as Pia apologized: “We have not rehearsed that, but can we play ‘Shaker Song’ instead?”

But of course, we answered with glee.

That spelled the difference: Fusion knew how to improvise and please an audience.