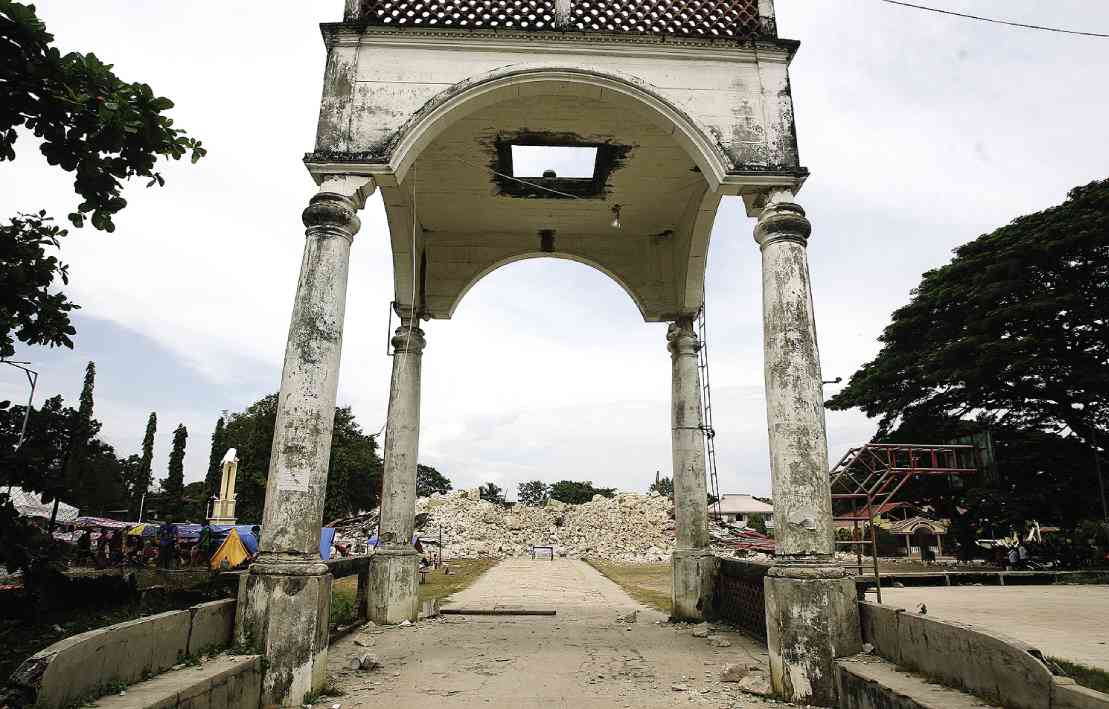 LOON Church as seen from the pavilion at the church plaza. MARIANNE BERMUDEZ

The Heritage Task Force sent to check the damage to old churches and other important cultural structures in Bohol and Cebu by the killer 7.2-magnitude earthquake the other week is now drafting recommendations to be submitted to President Aquino.

Aside from the restoration of the churches in their actual sites, the other possibilities are adaptive reuse and the building of  churches in other sites.

Commissioner Regalado Trota José of the National Commission for Culture and the Arts said that whatever option to be taken must be amenable to all stakeholders: local governments, people, diocese and heritage agencies.

“We are in the pre-restoration phase, which includes the stabilization of the area by way of cordoning off the affected areas and documenting what remain of the heritage sites,” José said. “We are determined to save as much as we can.

“We still have to wait for the aftershocks to stop before further scientific assessments on the structural integrity of the heritage buildings proceed. According to Phivolcs (Philippine Institute of Volcanology and Seismology), we have to wait for two weeks.”

José added that the country had enough experts to formulate the restoration and rehabilitation of the toppled edifices and execute the plans.

José heads the task force that immediately went to the Visayas after the earthquake struck Oct. 15.

The group’s mission is “to rescue and, later, rehabilitate the damaged heritage structures, many of them churches that have been part of the life of the people for centuries, in collaboration with the Catholic Church, local government officials and communities,” according to an NCCA statement.

The NCCA groups together all  heads of the cultural agencies of government as well as representatives from the private sector, comprising artists, professionals and cultural workers.

José is a private-sector representative, heading the NCCA National Committee on Archives (he’s an archivist of University of Santo Tomas), and chairing the NCCA Subcommission on Cultural Heritage.

He is also the author of “Visita Iglesia Bohol” (NCCA, 2001), a definitive guide book to the ancient churches of Bohol.

Aside from José, members of the task force are Ino Manalo, executive director of the National Archives; Jeremy Barns, National Museum director; Fr. Milan Ted Torralba, executive director of the Catholic Bishops’ Conference of the Philippines-Permanent Committee for the Cultural Heritage of the Church; and Maria Serena Diokno, chair of the National Historical Commission of the Philippines.

Narrating how the task force rushed to Bohol, José said they had to go by a baroto, a fishing vessel larger than an ordinary boat, to get to Loon and Maribojoc, whose churches, declared National Cultural Treasures (NCT) by the National Museum, are considered the most damaged by the quake.

“Abatan Bridge, the only way to the heavily affected areas, collapsed, but we knew we had to go there,” José said.

The Church of Our Lady of Light in Loon, more popularly called Kasilak (“light”) Church, had been known as the largest heritage church in Bohol. But it was totally brought to the ground by the earthquake.

To cover as much sites as they could, José said their group split, and he and Manalo went to Loboc.

“When we got there in the evening, we attended a Rosary service, where the townsfolk were carrying candles, alongside the images of the Blessed Virgin and other saints,” said José. “It was an otherworldly experience.”

There was a full moon. At a far distance from where they were was a thunderstorm, and before the people prayed at the plaza, an aftershock was felt, recounted José.

“We are not regretful because we lost structures and artworks,” he explained. “We feel hurt because the people, the Filipinos, have lost a part of their lives. Generations have had the heritage structures close to their hearts.”

Even before the earthquake, the government, through the NCCA, has been involved in preserving the heritage churches in Bohol, said José. He cited the agency’s intervention against the building of a bridge that was very close to Loboc Church.

From this incident arose the first concrete recommendation of the task force.

In a meeting presided by Tagbilaran Bishop Leonardo Medroso and attended by Tourism Secretary Ramon Jimenez Jr., Bohol Gov. Edgar Chatto, mayors and the clergy, the task force urged that heavy construction work must not be allowed near heritage zones.

“Construction of main roads and bridges must be banned anywhere near heritage structures,” said José. “Construction work, especially digging deep into the ground, weakens the foundation of the structures.”

The commissioner said the task force also urged effective coordination among government agencies for the conservation of cultural heritage sites.