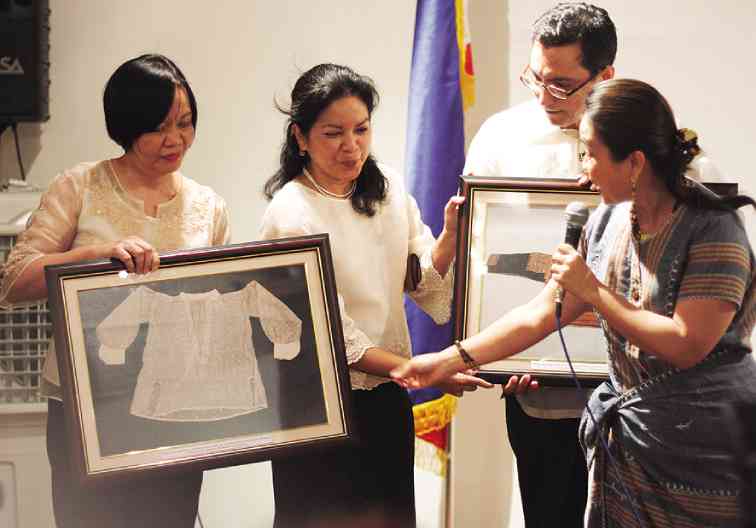 In the inauguration of the expanded permanent exhibition “Hibla ng Lahing Filipino: The Artistry of Philippine Textiles” at the National Museum last Sept. 20, Sen. Loren Legarda handed out photographs of Rizal’s collection of Filipino indigenous textiles to the National Museum.

“When I went to Berlin, I found out from the ambassador that there’s the Ethnological Museum of Berlin and Dr. Jose Rizal has some artifacts (there). He collected textiles and indigenous clothing,” Legarda said. “I requested to bring them out and I took photos of the collection. These are the collection of Rizal in 1887.”

According to Legarda, Chairman of the Senate Committee on Cultural Communities, she has already written a letter to President Aquino to request the German government to allow the collection to be brought to the Philippines.

“Hopefully, next time we will be able to bring the Rizal collection from the German museum,” she said.

As of this writing, the photographs of Rizal’s collection taken by Legarda are not yet displayed in the museum.

“Hibla ng Lahing Filipino: The Artistry of Philippine Textiles” features various Philippine indigenous textiles such as piña, abaca and cotton. It displays garments from indigenous groups such as the B’laan, T’boli, Maranao, Isneg and the Tagalog.

It also showcases old photographs of Filipinos wearing their traditional wear at the 1904 St. Louis Exposition and the traditional looms used in making the textiles.

National Commission for Culture and the Arts Chairman Felipe de Leon Jr. highlighted the importance of indigenous artistry and culture.

He said that there is no kitsch and cliché about the works of the indigenous communities. Everything is original, he added.

De Leon noted the generous space given by the National Museum to the works of the Gawad ng Manlilikha ng Bayan (Gamaba) awardees.

“I am very glad that we (now) have a very good space for the Gawad ng Manlilikha ng Bayan awards because previously, the Museum had a very small space for them,” he said.

Gawad Manlilikha is the indigenous arts version of the National Artist Awards. It is sometimes called the “National Folk Artist Award.”

The Department of Education and the Summer Institute of Linguistics also gave a full set of ethnologue posters of the indigenous peoples to the National Museum.

National Museum Director Jeremy Barns said that the National Museum supports the DepEd in the mother tongue program of the “K to 12” system, which adds two years to the basic education curriculum.

Barns also introduced other features of the National Museum such as the Baybayin and the climate change exhibitions, which showcase Filipino indigenous scripts and the effects of climate change on Philippine biodiversity.

“Hibla ng Lahing Filipino: The Artistry of Philippine Textile,” the first permanent textile exhibit in the country, is on the third floor of the National Museum’s Museum of the Filipino People.