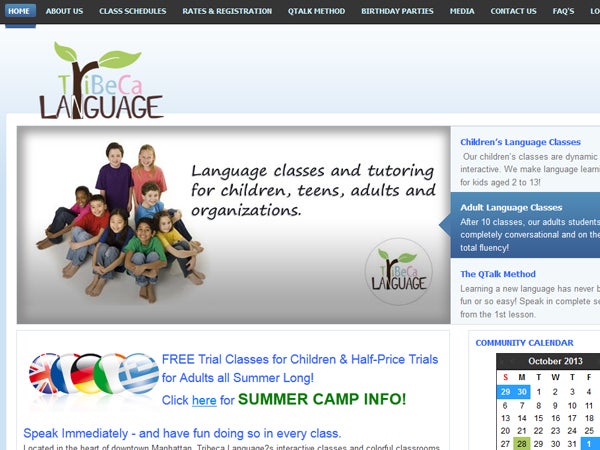 NEW YORK CITY – The pursuit of educational excellence is so competitive in New York that some babies are given personal tuition in French and Chinese, and four-year-olds are hothoused for the best schools.

Some of the richest, most competitive, most fashionable parents on the planet leave no stone unturned in the fight to provide their children with the upper hand.

Babies who cannot even form sentences in their native English are signed up to “baby and me” lessons in Chinese or French in the ultra-trendy TriBeCa neighborhood of Manhattan.

At TriBeCa Language, the lessons are open to tots as soon as they start babbling.

In one, a French teacher sings a well-known French nursery rhyme to nine-month-old twins sitting under a “baby gym” on a mat with their American mother.

The teacher then guides them through a game with little doors illustrated with pictures of rooms in a house, behind which are animal figurines.

“Where is the rabbit? In the sitting room!” she says in French, opening one of the little doors.

Maurice Hazan, the founder of Tribeca Language, said when he moved to New York 20 years ago, he realized there was a huge market in introducing children to foreign languages as early as possible.

In a city where 37.2 percent of the residents were born overseas, many richer than average parents want their children to be bilingual even if mom and dad are not.

Wealthy parents are also influenced by research suggesting that growing up bilingual can have a positive impact on memory and early learning.

With the global rise of the Chinese economy, Chinese is currently the most in demand, but French still holds the enviable association of being seen as chic, Hazan said.

“We want her to develop cognitive skills and an ear for language to set her up for loving the exploration of language and cultures going forward,” says one mother of a four-year-old girl who has been at the school for two years.

Learning a foreign language also bulks out applications for the best elementary schools, where a baby boom has made the competition for places fiercer than ever.

To get into the best private schools, where tuition can top $40,000 (30,000 euros) a year, children as young as four are subjected to rigorous tests.

Middle-class parents who can’t afford private education face an equally competitive fight to get their children into the best public schools.

Children must go to local elementary schools, but after that they vie for places at the best junior and high schools across the city.

“I would move in a heartbeat (to be next to a good school) if I could, but I can’t afford it,” said Lee Berman, a government worker and father of two girls aged seven and 10.

In the Lower East Side, a gentrifying neighborhood of Manhattan, public schools are terrible, he said.

He did everything to get his daughters into the “gifted and talented” (G&T) program at their school that offers higher quality teaching.

Until 2008, children were selected by their head teachers, but now they take a written test — for which parents stump up cash for private coaching.

Since they were four, Berman’s daughters have gone to Bright Kids, which offers phone apps for $35, “boot camp” for $400 or private lessons for $200 an hour.

Although they are already in a G&T program. Berman says their school is badly run, and he wants them to pass a new test to get into a more prestigious G&T school run by the city.

He recognizes that it is a lot of pressure at a young age.

“To say whether your child is brilliant even when they can’t read yet, many people say that’s ridiculous,” he said.

The aim is “not that they answer everything right but that they get used to the test,” Berman says as his youngest daughter learns to solve logical problems on a tablet with her tutor.

Bright Kids, which opened in 2008, already has 200 teachers at five different locations across New York.

Andrew Peterson, a Bright Kids teacher, said very young children who refuse to concentrate or sit down force a good teacher to get their attention “in a fun way”.

He also needs to manage the expectations of parents and make them accept that “even if their child scores in the 98th percentile and not in the 99th percentile, they are still very bright”.