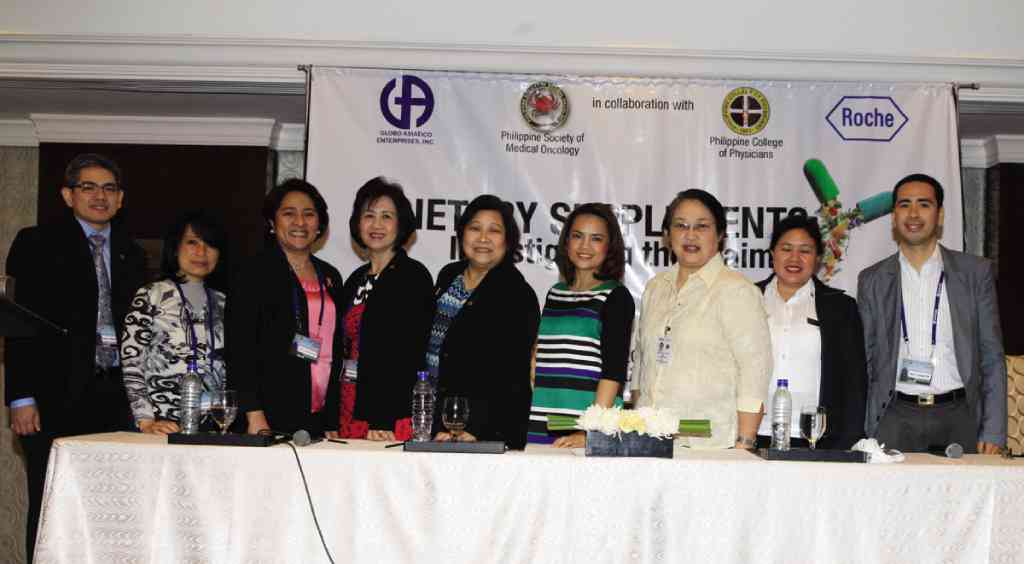 A well-informed cancer patient is an empowered patient. But the barrage of often-conflicting information sourced from the Internet can be overwhelming, and deciding which to believe can be paralyzing.

Green tea, malunggay oil, vitamin C, guyabano and even red wine are believed to have properties that can cure cancer. How true are the claims?

“I am telling you right now, guyabano is not an anti-cancer fruit,” said Dr. Ellie May Villegas, the feisty, petite vice president of the Philippine Society of Medical Oncology (PSMO).

“We rely only on evidence. Guyabano is not proven to kill cancer cells, and yet it is marketed as 10 times more potent than Adriamycin, a commonly used drug in chemotherapy. Adriamycin is a very potent anti-cancer drug. Why do you associate it with a fruit? They don’t even know what they’re saying.”

The Asimina triloba fruit, which in no way resembles the guyabano, contains the natural compounds acetogenins that are proven to help regulate various types of cancers.

“When the North American pawpaw is taken with chemotherapy, patients and physicians noticed an above average amount of tumor shrinkage after the first treatment than normally expected with chemotherapy alone,” she said.

Villegas was expressing concern over networking companies that profit from making bogus claims about natural cures.

PSMO believes in the multidisciplinary approach: surgery, radiation, chemotherapy and, when proven safe and effective, dietary supplements to complement the treatment.

“With the proliferation of scientifically unsupported alternative cancer treatments, PSMO has established that there is a need to educate the public on how to address the cancer problem. We put together a position paper to help guide fellow oncologists, doctors and patients in making correct choices,” said PSMO president Dr. Felycette Gay Lapus.

“Randomized controlled trials in advanced cancer patients taking 10 grams per day of oral vitamin C did not demonstrate any significant benefits. These can, in fact, interfere with the action of chemotherapy and radiation therapy. That’s why we always advise our patients to tell us what they’re taking,” Villegas said.

They can even cause nutritional deficiencies, she said, while some entail potentially toxic doses of supplements or agents. Coffee enemas, for instance, can cause sepsis, dangerous electrolyte deficiencies, and even death.

“The colon or large intestine is there for the stool to pass through. Why do you have to clean an organ that is supposed to be dirty? It is supposed to facilitate the removal of toxins via the stool. The American Cancer Society strongly urges cancer patients not to seek treatment with metabolic therapies. No published evidence supports their claims,” she said.

“We cannot promote malunggay oil to be used as an anticancer agent because this has never been used on humans. What you can eat in a diet, eat it. Do not put it in a capsule or tea,” she said.

Severe lactic acidosis was reported with mangosteen juice daily for 12 months, and patients eventually died not from their cancers, but from the lactic acidosis from mangosteen, Villegas said. Mangosteen may also interfere with certain chemotherapy drugs, and must be used with caution by diabetics due to its high sugar content.

Resveratrol, which can be found in red wine, is also consumed as a dietary supplement for its purported antioxidant and anti-inflammatory properties.

“Because resveratrol exhibits estrogen-like properties and activates transcription by both the estrogen and androgen receptors that lead to stimulation of cancer cell proliferation, patients with hormone-sensitive cancer should use it with caution,” she said.

It may also protect against chemotherapy-induced cardiotoxicity, although more studies are needed to confirm its effect on humans, Villegas said.

“I caution breast cancer patients taking Tamoxilin not to take these supplements with resveratrol or grapeseed,” she said.

As for omega-3 fatty acids, although studies on their role in cancer prevention are inconclusive, Villegas said, they may reduce colon cancer risk, improve immune response in patients with colorectal cancer, and are associated with reduced occurrence of renal cell carcinoma in women.

Fish oil supplementation may reduce the risk of breast cancer, she said, although high-blood concentration of omega-3 is associated with increased risk of prostate cancer.

“We’re not saying no to supplements. We just want to direct patients to those which work and how to safely combine them in a complementary fashion with chemotherapy drugs in a safe and efficacious manner,” said Dr. Omid Etemadi, a board-certified integrative medicine doctor who trained at the National Cancer Institute in the US.

Etemadi said no supplement has been shown to cure cancer on its own.

“There are anecdotal reports, case reports that patients have been cured through very significant lifestyle changes, but these are very rare—more the exception than the rule. More than 99.9 percent of them will not benefit from diet and supplement alone,” he said.

“For stage 3 and 4, we prolong the lives of patients if we use standard care. The cancer doesn’t completely regress, but it doesn’t grow anymore.”

“Dietary supplements may help reduce the side effects of standard care, may help survival rate and prevent cancer recurrence. But I would not recommend that patients use them alone,” said Etemadi.