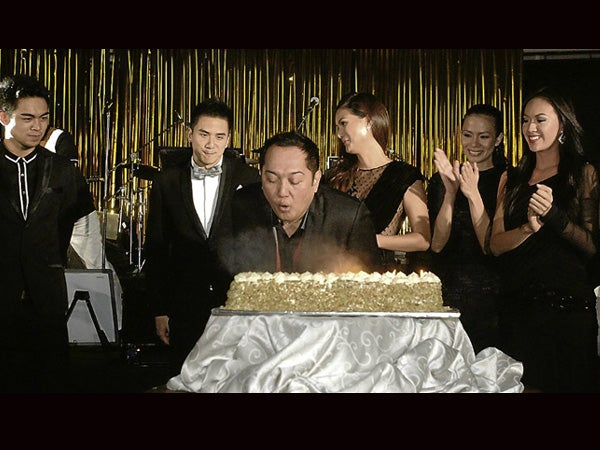 The celebrator blows the 50 candles on his birthday cake, as his models look on. Photo by Jim Guiao Punzalan

WHEN RANDY Ortiz turned 50 on Aug. 19, he asked his guests to come in either black or white. Pretty minimalist. But the evening, however, was anything but minimalist, or an antiseptic white or somber black.

It was as vibrant as the colors of the rainbow.

For the bash, the Manila Polo Club Lounge, relatively vast as it is, had quite an intimate layout–long tables arranged diagonally, not in straight lines, to create a very casual feel. People were free to sit anywhere, so friends naturally gravitated to each other.

The food was great, including the lechon and everybody’s favorite, the crepe cake.

But what made the night most meaningful was the spontaneous outpouring of love–and ribbing–by Randy’s close friends.

The hilarious part was the emceeing by the fashion designer’s close friends from showbiz–actually the heartthrobs–John Estrada, Richard Gomez and Randy Santiago.

Jackie didn’t wait for John to introduce him and just hopped onstage with his own mic–he was afraid what the latter would say. But Jackie didn’t prove quick enough. John was able to make a hilarious quip about the friendship between Jackie and Randy–”Kung si Randy ang damit, si Jackie ang… (we omit this part).”

Jackie read a poem for his friend, his version of  “Trees.”  Excerpt: “I think that I shall never see… A better designer than he… A designer whose lovely mouth is pressed against sweet fashion’s flowing breast; And like a tree that looks at God all day,   And lifts those fabulous sleeves with his arms to pray….  Shows are made by fools like me, but only he will agree to dress me up for free.”

Then leading a toast, Jackie said: “When we were younger,  we loved to toast  to our true love,  may they soon find us. But for Randy, on his 50th, to your true loves… For they have all found you…”

Sweet friendships–they make turning 50 worth it.