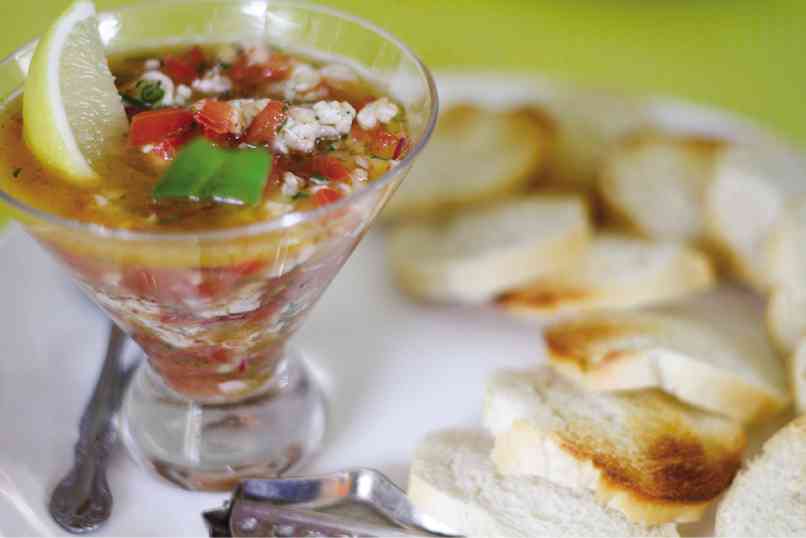 Two beautiful old homes were the setting for two lunch appointments in Davao.

The first was the ancestral abode of the first mayor of Davao, Alfonso G. Oboza and his wife, Natividad Iñigo. It was built in 1929 and is beautifully preserved. Their son, Rene Oboza, didn’t want to move in, but hoped restaurants could rent the place.

Now the main area has been leased to Claude’s, a French fine-dining concept that has been Davao’s best-kept secret for 20 years. Oboza directed me to look at photographs of his parents entertaining the political lords of the time, such as Elpidio Quirino and Manuel Roxas.

Tricie’s long menu awaited us; at the back of it, her husband, Vince, wrote about how some of the furniture was taken from their grandparents’ houses and how the menu contains family recipes. When the dishes came, you conclude that they’re the opposite of what Tricie’s brothers, Miguel and Rob Pengson, two established chefs in Manila, do with foams and agar agar.

The recipes offered here are a collaboration of the three siblings. I’m not sure whether their mother and my friend, Maricris Heras Pengson, also has a part in it, because she is as well-known for her cooking, according to Tricie. Some of the dishes hark back to the family’s Negros roots.

Dishes at the Cellar de Oboza are comfort food. Some of them Tricie serves to her children, such as the eggplant frito—fried long pieces with a dip; or the main dish of fish stick in guava tamarind sauce. Two more appetizers made us quite satisfied—the shrimp ceviche, rightly called such because of the salsa that flavored it; and the imbao (shellfish) topped with garlic toasted in butter.

Several meat dishes came one after the other—beef salpicao, which Tricia said should be served as soon as cooked; slow-cooked lengua; and US Angus beef belly sisig, the meat part chosen by Tricie who doesn’t like meat from the face.

There was also shrimp in crab fat. One could pair all those with either a Cellar pancit or fried rice cooked with chorizo that Tricia makes herself.

A restaurant is best served by suppliers who are also collaborators. The salad, said Tricie, is from a friend who runs an organic farm, and there were two dressings that looked good to try with the mixed mesclun—guava balsamic, mango and cranberry.

And because Tricie said desserts are not her forte save for the churros con tsokolate, a friend, Wency Cornejo, does the maja blanca cheesecake and the durian crack pie, which is patterned after the now famous pie creation of Christina Tosi of Momofoku Bakery and Milk Bar in Manhattan.

The second house looked like one of the American green-and-white homes once found at Baguio’s Camp John Hay, Jusmag at Heroes Hill in Quezon City, and some houses in Olongapo when it was still a US facility.

Built in the 1900s by Robert Kerr who was an abaca plantation owner, the house is situated at the Camella Northpoint, and is planted to pine trees at the entrance, making you think of Baguio for a moment. But the fruit trees of langka and suha at the open-air dining area are reminders that you are in this biggest city in Mindanao.

The heritage house is called “The White House,” and now that it’s a restaurant, it has added “Fusion Cuisine and Wine Lounge” to its name (Northpoint, JP Laurel Avenue, Bajada; tel. 82-282-4540). The main dining area is on the first level. Its see-through kitchen invites diners to look at what’s cooking. The menu is mainly degustation or small servings that are Japanese-inspired.

The uni (sea urchin) shooter rested on crushed ice, while the raw quail egg waited to be mixed in, then the whole thing taken in one gulp. Mango caviar made through a molecular gastronomy technique was taken next, to burst in the mouth as refreshment.

The oyster was cooked à  la tempura with a wasabi sauce, giving a crunchy counterpoint to the soft and wet shellfish. The smoked tomato soup was designed beautifully; the orange-colored bread served as a receptacle for the soup, which had a bit of foam on top. The broth was so good that we wouldn’t have complained if another serving was given.

The sea bass was pan-seared, served with mashed sweet potato and some edamame. But how to serve US topblade salpicao the Japanese way? By placing the cubed meat on top of sushi rice wrapped in nori, keeping to the degustation size.

Then there was Yamamomo cheesecake, supposedly the restaurant’s signature dessert. Yamamomo is the Japanese name for a fruit (Myrica rubra) that’s like strawberry or cherry. There were two other desserts, one with bananas, presumably from Davao plantations, and Brioche French toast, both too much for a degustation.

But the more important people are the workforce. Chef Julie Taguran, who is male despite his name, used to work at Isshin Japanese Restaurant along Pasay Road in Makati and  Kai in Greenbelt. His sous chefs are Greg Emmanuel and Esther Acoso, while the assistant pastry chef is Biyan del Rosario. Justin Sison, the operations and events manager, is another transferee to Davao from Manila.

Those were just two places we checked out during our recent visit to Davao City. There were more—places of old friends (not according to age) and new ones. They are worth another column.