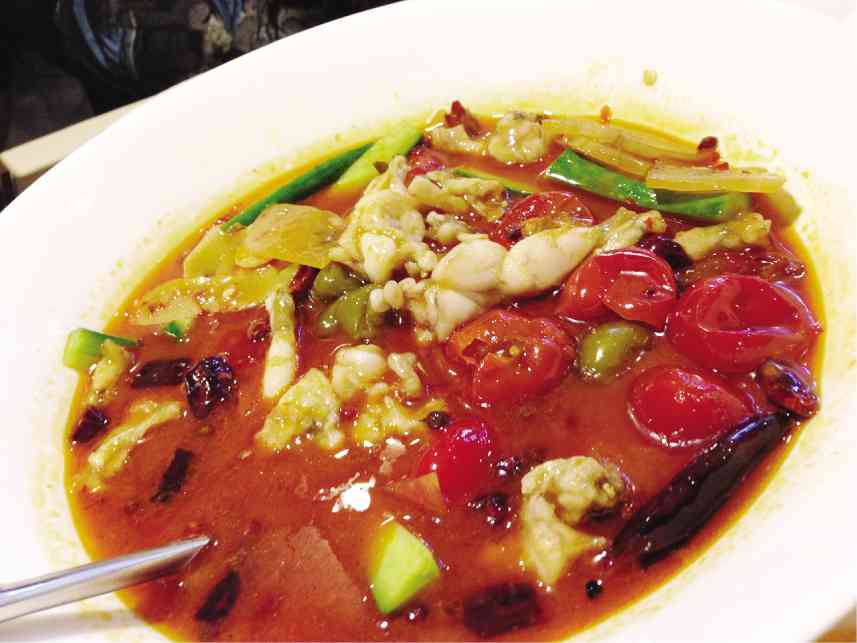 There’s absolutely no reason why we can’t have good Chinese food in this country. It’s not as though it were something exotic like Japanese food, which is exacting and requires special skills and ingredients, but somehow we manage; and the bar, already set high, has been raised yet further in the last few years.

Our French and Italian restaurants are in decline, not for want of ingredients or skilled chefs, but of customers willing to pay for it done right. Chinese food should be a breeze. But it isn’t.

It may be because it’s held up to less exacting standards. After all, it’s just Chinese food, isn’t it? Just lots of oil and monosodium glutamate, a cheap way to feed a multitude in fluorescent-lit caverns called Happy Phoenix or Lucky Dragon, with large round tables and cutlery of dubious hygiene.

It irks me when Chinese food is still thought of in these terms, and it annoys me even more when restaurant proprietors or chefs think about Chinese food this way, especially regional food, which occupies a more sacred space than a general “modern pan-Chinese” cuisine, which allows more room for interpretation and innovation.

Modern Sichuan Restaurant is sparkling with bright chandeliers and gleaming tableware, a world away from the dingy canteens of Binondo where the ceiling fans send a cascade of flies and patina of decades-old dust swirling onto the noodles.

It’s the kind of bustling but not over-contrived, upscale dining establishment that every Chinese city has these days, now more the rule than the exception.

“Modern Sichuan” is a fitting name, and it joins the other “modern” Chinese restaurants (not all by the same owner) that have sprung up in Manila.

Because we’ve had such a long history of Chinese food in the Philippines, because Chinese labor is cheap (or at least less expensive, one would imagine, than its Japanese or French counterparts), and since we have such a large and discerning migrant community here, the standards ought to be high. At least as high as our standards for Japanese or French or Thai food.

This is not a cuisine that needs to be introduced. This is something that demands to be authentic and sophisticated and damn near perfect.

This restaurant fails in all three aspects. Not spectacularly or horribly, but just in a tired, deflated, mediocre way. Sichuan food, which isn’t just ordinary Chinese food with lots of chili added, is a complex and distinct regional cuisine that has become quite popular outside of China in recent years, because Sichuan and its neighboring province, Hunan, are some of the poorer regions in China and the migrants have been spilling out.

The poverty also explains the spice: All capsicum-based spice came from the New World via the Europeans, but it took hold in the poorest regions, where it could help push the rice down (in our case, the comparatively arid province of Bicol). The Sichuan peppercorn, though, is indigenous to the region, and has a numbing rather than fiery effect.

The judicious combination of the two, as well as specific and seemingly counterintuitive cooking techniques, such as “pulling” the meat through oil at low temperatures, make the region’s cuisine fairly unique and something of an acquired taste (but difficult to live without).

A large part of the reason Modern Sichuan isn’t all it could be was the staff’s inability to guide us through the menu. We ended up ordering the “bestsellers” as well as a few dishes that I’d

The strips of fat meat and cucumber hung like laundry over a pole. The meal started sliding downwards with the arrival of the Sichuanese ma la frog—an imposing basin, somewhere between a hotpot and a stew, of hot oil with lots of chilies floating atop, through which you have to dig for the bits of meat, usually fish, or in this case, frog’s legs.

It wasn’t hot or oily enough, and they brought us soup bowls in case we wanted to drink the oil.

The frog’s legs were unusually plump and tender, but the spice was all wrong: blunt and in-your-face, rather than being woven in and enhancing the other flavors.

The eel, too, was good produce murdered by bad cooking: large bits, not full of bones as eel can be, but bland and seasoned indifferently.

For dessert we had the watermelon sago, which was actually quite good, and the “signature” sweet potato, which was, well, a sweet potato. Or rather, four sweet potatoes, for P150. It’s not eye-wateringly expensive, but I know where the market is and I can boil my own. There was no sign of the cheese or condensed milk that it was rumored to have. If this is what the resto claims is its signature, I would have a second look at its identification.

In the end, the whole Sichuan aspect of it seems to be a bit of a gimmick to keep it from being just another Chinese restaurant, which actually shouldn’t have been a problem. Modern China has long been a classic in Glorietta and would have been equally welcome in Bonifacio Global City as well.

But to reduce Sichuan cuisine to a marketing ploy is to do great disservice to a rich culinary heritage, as well as put off newcomers whose first taste of Sichuanese food would be a misinformed muddle that has the names, but none of the real tastes of the province.

For those craving for their dose of fiery flavors, this comes tantalizingly close, but needs to be extensively revised before it can satisfy.