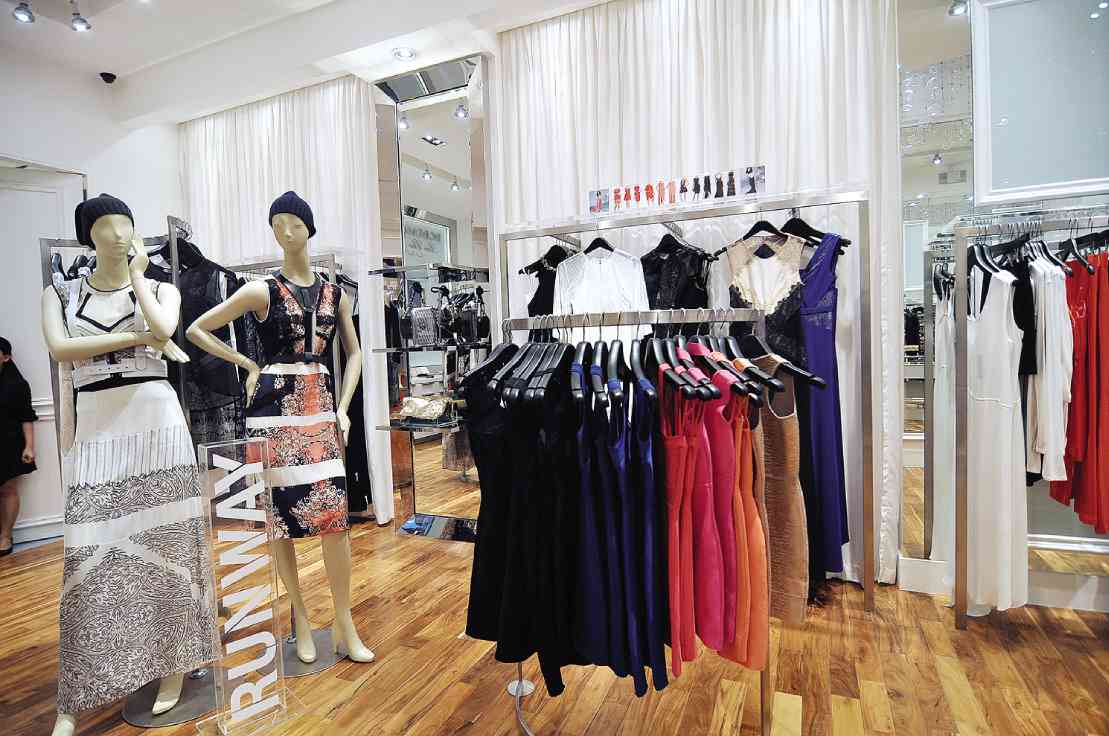 BRAND director and chief merchandiser Kat Florencio gets items that are suitable to the country’s tropical weather and Filipino fashion sensibilities.

In place of runway show, a fashion pictorial

Businesswoman Kat Florencio and director Robby Carmona did away with the usual fashion show recently, to give guests a peek instead at what goes on behind a real photo shoot.

“The Shangri-La store is very special to us,” said Florencio, director of Linear Group. “As our flagship store, it’s the only store that carries BCBG’s runway line.”

BCBG’s fall collection consisted of contrasting neutrals, subtle prints and hints of color such as red, maroon, salmon and royal blue. Vintage-inspired dresses incorporating tiers and strategic panels of lace, and tailored pieces with neutral trimmings and color blocking were among this season’s dominant looks.

Fabrics ranged from soft materials like silk and georgette, to more rigid ones like cotton canvas, eco-leather and silk jacquard. The general silhouette was close to the body.

“Since I’m also the merchandiser, I personally choose the looks that would work in our weather,” said Florencio. “Except for a few textured jackets, we don’t carry a lot of outerwear. But we also have a line of shoes, bags and accessories. Come summer, we will be introducing swimwear.”

Florencio and her team also followed the design directives of BCBG when it came to constructing the stores. An in-house team of carpenters executed BCBG’s designs down to the last detail.

“All furniture and fixtures also came from the US,” she said. “So, the look of our stores is no different from the interiors of BCBG’s other stores the world over.”

courtesy of Ria Bolivar, one of the country’s top models.

Instead of joining the photo shoot, Bolivar, dressed in BCBG’S printed ensemble consisting of skinny pants and loose jacket, did the styling.

“I know Ria,” said Carmona. “She’s my ‘daughter.’ She’s one model who has a natural eye for style. But to save on time, we already preselected the pieces based on BCBG’s current collection.”

Partly made-up and dressed models and brand ambassadors sat one at a time on Mayuga’s chair for quick, last-minute touch-ups before heading to Bolivar, who tweaked their looks by making them wear, say, a jacket or an accessory or two.

Before sending them off to Pineda, Bolivar also checked if the women’s hair and makeup were impeccable by making sure, for instance, that there were no lipstick stains on their teeth and that every single strand of hair was in place.

Each woman stood behind a lit white canvas before striking a series of poses in front of Pineda’s lens. The results were instantaneous, as each subject’s series of images were beamed on a projector for everyone to see.

Compared to a typical ramp show, which usually lasts from 20 to 30 minutes, the BCBG photo shoot was over in 12 minutes, said Carmona.

“Kat and I wanted a more dynamic and interactive show,” he said. “I’ve done all sorts of shows, and this, by far, was one of the most interesting concepts I did. That’s why when we were supposed to rehearse, I suddenly nixed the idea. After all, this was supposed to be a photo shoot. It should be spontaneous.”