The things that matter to David Gandy | Inquirer Lifestyle

What’s the best Disney song to wash your hands to?

The question was asked by Youtuber, Harry Potter theorist, and Pixar expert Seamus Gorman. Finding himself momentarily stuck in an Airbnb in America,… 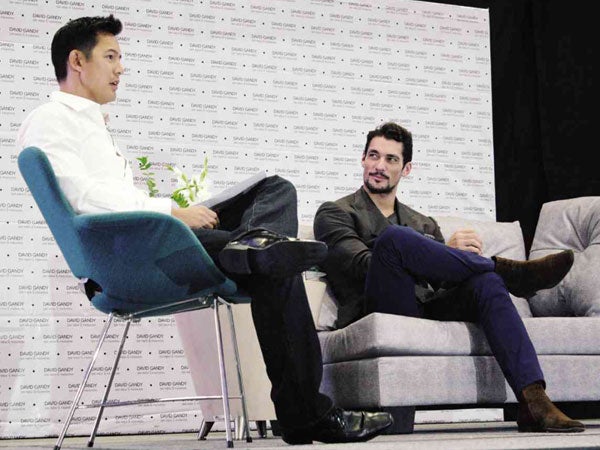 The things that matter to David Gandy

In a chat with Inquirer Lifestyle, the 33-year-old British bachelor gave a piece of his mind on chivalry in the 21st century, fashion trends and the intricacies of his career.

In an article he wrote, published recently on telegraph.co.uk, Gandy said that a true gentleman “holds chivalry and politeness in great regard. He holds the door for people; he gives up his seat, he takes off his coat to a lady on a cold evening, he still believes in these now old-fashioned actions, even though the world has changed somewhat.”

But then he admitted to us that it’s difficult to do those things these days “because women have become very powerful. Men, I think, have stopped doing that because they’re not quite sure where they stand with women.

Yet he believes men should not let go of such traditions. “It’s up to the lady to accept it or not. But, that’s why I wrote the article. I think we’re in a world in which boyish or outlandish behavior is appreciated more than the pursuit of being a gentleman.”

One character that gentlemen should also hold dear, Gandy told us, is individuality. People have a tendency to emulate celebrities, but Gandy himself does not conform to the norms of the fashion industry.

Gandy is credited for ushering in a new trend for male models. Before he burst into the scene, male models flaunted the skinny, waif, androgynous look. But when he appeared on the Dolce & Gabbana ad, his muscular build became the focal point—setting off a demand for male models with good physique.

“I wasn’t as big as I am now when I started in 2001,” he recalled. “There were really two routes, whether to stay the same or get bigger and muscular.”

Back then, the models he took inspiration from were the “classic, good-looking guys with good bodies.” He worked on that look and that was how he got the Light Blue gig. “They were looking for a muscular and Mediterranean-looking guy,” he recounted.

His fashion sense is sleek, well-tailored and precise. “I’m looking at a lot of military clothing. I have things made from those [designs],” he said. “My style icons are Steve McQueen, James Dean, Paul Newman, Cary Grant.”

But the best dressed man in the world, in Gandy’s opinion, is Prince Charles. “When you look at Prince Charles, he’s always elegantly dressed,” Gandy noted. “He has a tailored look

which is very different from Steve McQueen.”

Gandy, who finished a marketing degree at the University of Gloucestershire, exercises full control of his career. As an endorser of Jaguar, Johnnie Walker, Dolce & Gabbana, among other luxury brands, he pointed out that he has become discriminating when new offers come.

When SM asked him to consider its offer for SM Men’s Fashion, Gandy said he did his research. “I looked into it; it’s a very powerful brand in the Philippines and SM is expanding. I want to expand in Asia as well. This collaboration then makes sense,” he explained.

The olive-green blazer, navy-blue chinos, dark-green shirt and brown boots he was wearing for this interview—all by SM Men’s Fashion—looked great on him.

“I’m very impressed with the clothing and the designs,” he said. “We had a great photo shoot. It’s certainly quite individual. We live in a world where globalization means everyone, whether in New York or in London, has the same stuff. But in the Philippines, it’s slightly different, which is nice to see.”

Gandy said he hopes to be an inspiration for the younger generation of models. He’s excited on what they can also achieve.

Reflecting on how far his glamorous job has taken him, Gandy wished he could have more time for his own private pursuits. “There’s a lot of dedication that goes into [my career], that my business life has taken much of my personal life,” he said. “I’ve missed, goodness, how many weddings, birthdays and holidays. You have to remember to live life. If you want things to go on forever, you have to spend time with your family.”