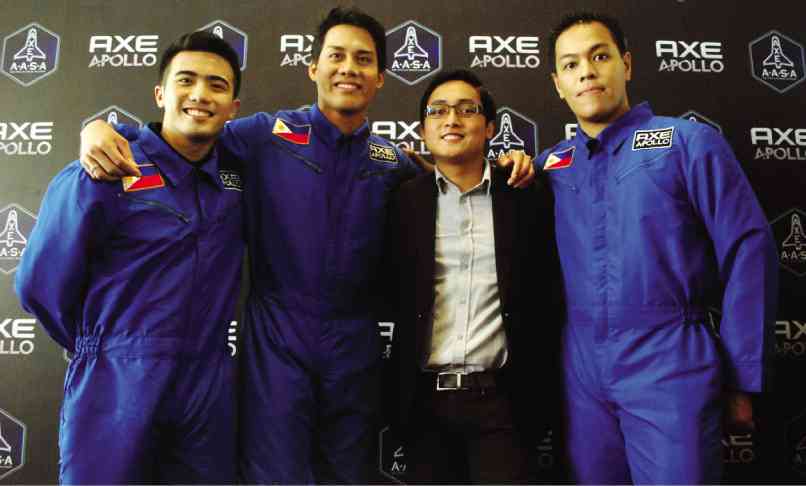 Our first Filipino astronaut in 2014

Five decades since man first ventured into outer space, the Philippines would soon have its first astronaut.

The lucky Filipino will join an elite group of 500—which includes Yuri Gagarin, Alan Shepard and other famous astronauts who have had the rare chance of space travel and seeing the Earth from a galactic perspective.

The three Pinoy finalists vying for that opportunity are Evan Datuin, Ramil Santos and Chino Roque. They are the country’s representatives to the Axe Apollo Space Academy global competition, which will send 23 people from 60 countries on a suborbital space flight starting mid-2014.

They must beat each other in a four-day, fast-paced Space Camp training in Orlando, Florida, in December, with the more than 100 winners from participating countries.

To prepare for their space flight, they will train like professional astronauts.

First is the G-centrifuge training, where they will be subjected to hypergravity. This will allow them to feel the effects of gravity on their bodies.

According to the National Aeronautics and Space Administration website, fluid weighs more in hypergravity. When an astronaut is exposed to such an environment, “the heart has to change how it operates, pumping faster and working harder to push the blood all the way to the brain.” As a result, astronauts “may become dizzy or, in extreme cases, pass out.”

To simulate weightlessness, parabolic flights will be conducted. Aboard a spacecraft that free-falls at the speed of gravity, astronaut aspirants will experience repetitive periods of 20 seconds of weightlessness.

The hyperspeed flight, on a jet that will fly at twice the speed of sound, will be akin to that of a rocket liftoff.

Interestingly, of the three Filipinos, only 24-year-old Datuin was able to complete and win all the tasks during the national challenges round. Santos, 29, got his slot via an electronic raffle, while Roque, 22, replaced Air Force Lt. Mario Mendoza Jr., who opted to drop out of the competition to serve the military as a pilot-in-training.

Among 60 countries in the competition, in the number of applicants, the Philippines has the fourth biggest number. In Asia, it has the biggest.

“We had more than 28,000 applicants, and because of that we were given a third slot for the Space Camp,” Laforteza said.

Apart from getting an additional slot for the Space Camp, the country was also given the guarantee that of the 23 individuals going to space, one would be a Filipino.

The 23 would-be astronauts will not be backseat passengers—they will copilot the two-seater XCOR Lynx Mark II spacecraft. (See sidebar for more details.)

A seat in the spacecraft reportedly has a commercial rate of $100,000 (P4.3 million) for anyone who wants to experience the flight.

Another possible site is the Curaçao spaceport in the Caribbean.

After takeoff, it would take around four minutes for the spacecraft to breach the atmosphere at 103 kilometers above sea level—about the height of 12 Mt. Everests stacked on top of each other.

According to SXC’s flight plan posted on its website, the first Filipino astronaut will marvel at the beauty of planet Earth for six minutes.

It’s not known yet if the 23 space-bound individuals will be allowed to bring anything to space. But if they are allowed at least three things, Roque said he’d bring a rosary, a Philippine flag and a body spray.

“You never know what will happen up there. You just have to have faith and believe in yourself,” Roque said.

Santos will bring a photo of his family, the Philippine flag and a map.

Datuin will bring a camera to capture the moment, and probably take the world’s most awesome selfie.

Sci-fi movies have depicted the ease of space travel. The truth is, it’s not as accessible to the public as it is on the silver screen. Through this campaign, Laforteza said, “it would help SXC democratize space travel and build interest in this once-in-a-lifetime experience.”