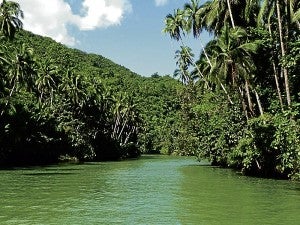 Cebu, Bohol on mag’s list of Top 5 Islands in Asia

The magazine announced on Oct. 15 the winners of its 26th Annual Readers’ Choice Awards, which ranks the best cities, islands, cruise lines, airlines, hotels and resorts in the world. The complete list will appear in the magazine’s November issue.

Conde Nast said Cebu and the Visayan islands “have it all, including all the shopping and restaurant needs for any traveler with the friendliest people anywhere in the world!”

“The night life is big here, but not as wild as Phuket,” one reader said. Entertainment is “smaller, more upclose and personal,” he added.

One survey taker said “in all my years of traveling, Cebu is my No. 1 choice!” Another said: “It is probably the best island city on the universe.”

Cebu and the Visayan islands got a Readers’ Choice Rating of 80.4 points, behind Koh Samui but ahead of Phuket. The latter two islands are in Thailand.

The Top 5 Islands in Asia with their corresponding choice ratings are: Bali, Indonesia, with 83.1 points; Koh Samui, Thailand, with 82.8 points; Phuket, (Thailand), with 78.9 points; and Lombok, Indonesia, with 77.8 points.

Readers raved about Bali for its “exquisite hotels, exotic and rich culture and extraordinary food, and the sweetest people in the world.”

Although some readers felt Koh Samui was “almost too developed,” the island moved up to second place from fifth place last year, with some readers saying it is a “beautiful island with fun night life and great restaurants, and plentiful natural foliage and beauty.”

Phuket went down from No. 2 to No. 4 this year, with some readers saying “it’s good for families but too chaotic and filled with many tourists.”

But on that year, Cebu was named Third Best Island in Asia by Travel & Leisure magazine in its World’s Best Awards, a listing of the best hotels, airlines, cruises, islands and cities all over the world.

Maui, Hawaii was ranked No. 1 in the Top 25 Islands in the World (with 93.9 points), with readers calling it a “veritable paradise; a combination of tropical ambience and American comforts.”

A candidate must receive a required minimum number of responses to be eligible for a Readers’ Choice Award.

Individual candidates were judged on a set of criteria relevant to their category, based on a standard five-point scale: excellent, very good, good, fair and poor. The percentage of excellent and very good ratings determines the final score published.

In the islands category, candidates were rated in the following: activities, atmosphere/ambiance, beaches, friendliness, lodging, restaurants and scenery. Resorts were rated on activities/facilities, food/dining, location, overall design, rooms and service.

No Philippine city made it to the Top Ten Cities in Asia. Kyoto, Japan, was ranked No. 1 for being a “beautiful city full of history.”

In the Top 25 Hotels in Southeast Asia, two came from the Philippines: Edsa Shangri-La Manila at No. 9 with 92.1 points, and Makati Shangri-La at No. 25 with 85 points.