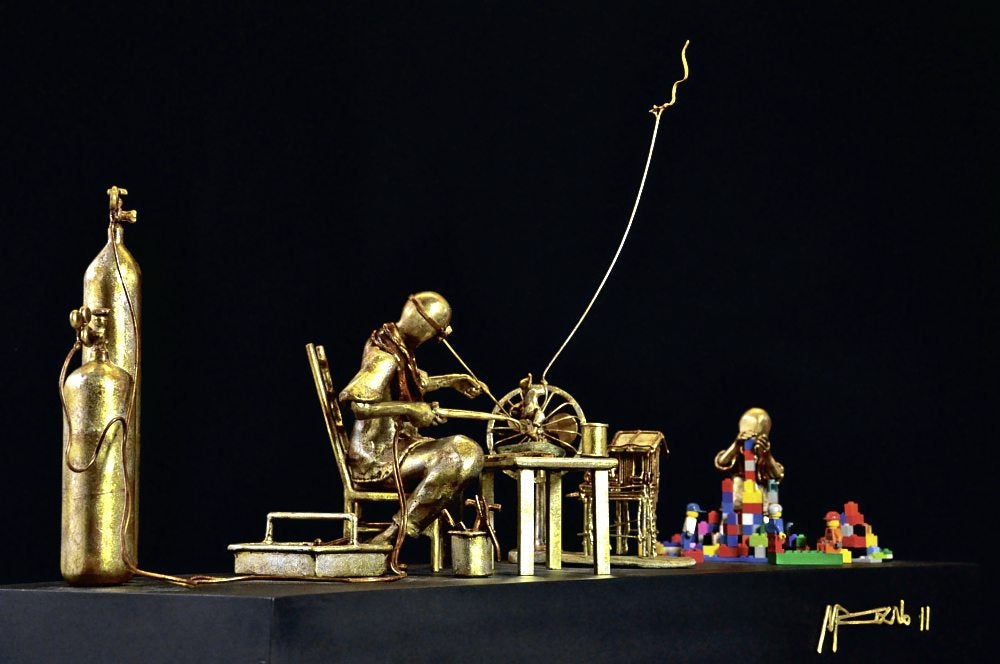 Brass sculptor Michael Cacnio has been a big fan of Lego since he was three years old. “It’s my favorite toy,” he says.

His love for the colorful bricks began when his ninang gave him his first bucket of Lego. “I can still feel the excitement and unexplainable happiness when I opened the gift and saw what was inside.”

He relished the freedom the bricks gave him to create the toys he wanted but didn’t have. “I would make my own robots. I could easily form my own car. And if I wanted a big airplane, I would make one with a more complex design. Imagination and creativity are limitless.”

And it is his passion for Lego that made this The Outstanding Young Men awardee the perfect artist to hold an exhibit with Lego.

Patrick Pesengco, director of LAJ Philippines, the country’s Lego distributor, says, “We believe both Michael and the Lego brand share a common goal—to produce exciting and inspiring creations that propel children and adults alike to dream, imagine, believe and create.”

For the exhibit “Inspire,” Cacnio worked   with brass and colorful Lego bricks to create sculptures. His biggest concern was to blend the two materials without compromising the properties of each.

He says, “One can expect to see the incorporation of unorthodox materials into my familiar subjects. The materials still bring out a complete masterpiece—they are not just plastic bricks. I played with the colors of the Lego bricks to give additional life and beauty to my brass sculptures.”

The exhibit will include “Inspired,” his self-portrait, and “Love,” which uses scattered bricks and Lego pieces to form a figure on a canvas. A lot of the sculptures were inspired by Cacnio’s childhood memories.

Cacnio says the collaboration is a dream come true for him. He says he was amazed to see his creations with his favorite toy.

“I’m hoping that this project will inspire other people to realize that art takes shape at an early stage and with the right tools, can be developed into something larger than life.”

“Inspire” opens at The Gallery of Greenbelt 5 on Sept. 16. The exhibit will run until Sept. 29.