How to Cook a Cookbook | Inquirer Lifestyle ❮ ❯ 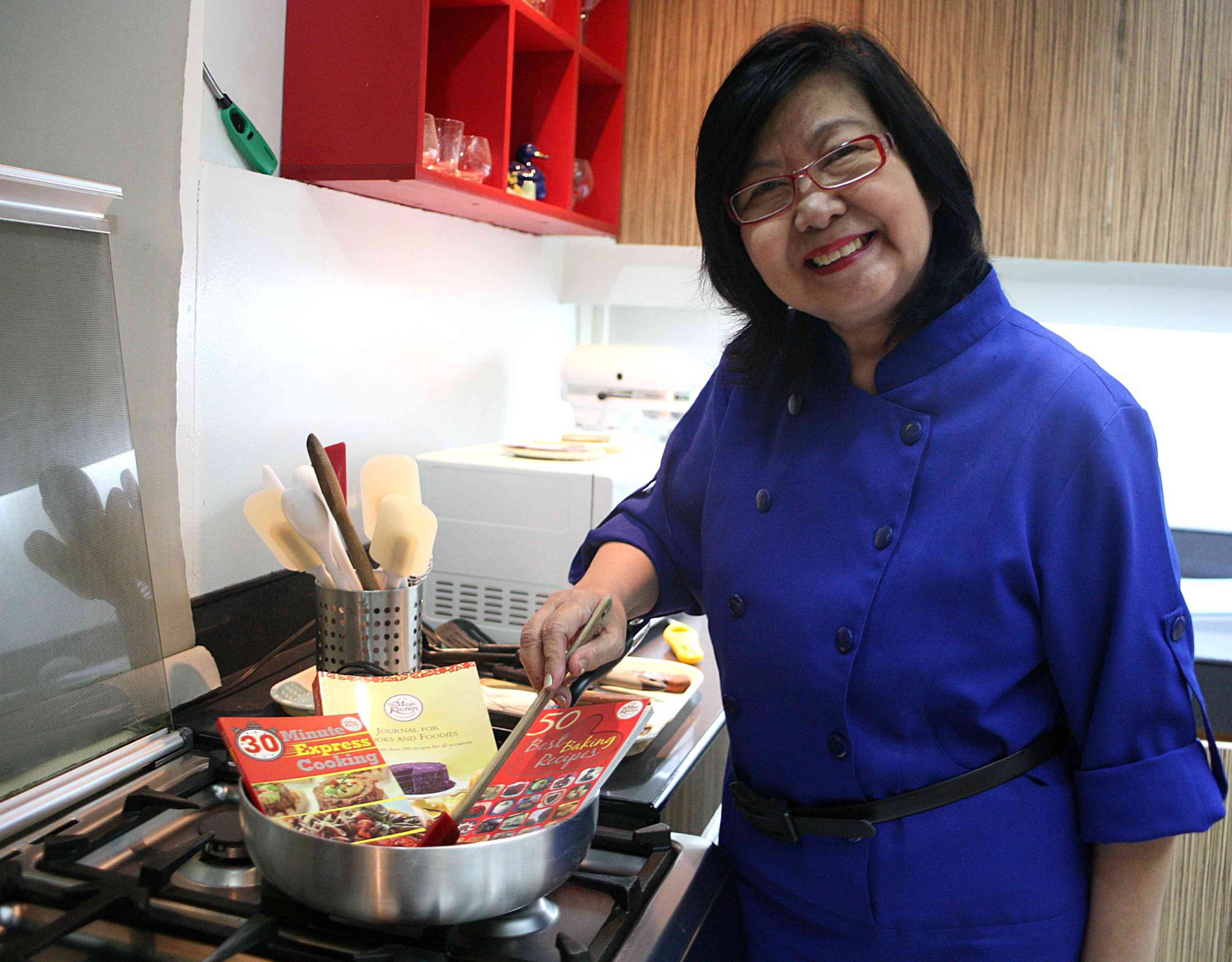 How to Cook a Cookbook

In the beginning, it was all about the flour.

The year was 1958, and Liberty Flour Mills, Inc. had just started business. But immediately, it sought ways to expand its lucrative wholesale market and was soon packing its flour in smaller, more accessible retail sizes.

By 1963, the company president, Felix Maramba, Sr., felt confident enough to attach a brand to the product. “My father, who was a very nationalistic guy, chose the name Maya,” Maria Lourdes Maramba Fajardo recalls. “It was (named) after the bird, which was supposed to be our national bird until (it was) changed (to the Philippine Eagle).”

In 1964, it occurred to the management folk at Liberty Mills that more people would buy its flour if they knew how to bake. So the company gathered people who had been trained abroad and sent them to different parts of the country to teach baking. The project was called the Maya Bakeshop.

The Maya Bakeshop began teaching baking skills to people who would later become known for their bakeshops: Goldilocks and Joni’s.  Fajardo joined Liberty’s advertising and promotions branch in 1969. Along the way, Maya became a household name for its mixes, the most iconic being the Maya Original Hotcake Mix.  In 1980, Maya Bakeshop was officially renamed The Maya Kitchen Culinary Arts Center. “We decided we wanted to get involved in food in general, and not just baking,” Fajardo explained.

So far, the Maya Kitchen has partnered with the Technical Education and Skills Development Authority (TESDA) and the Overseas Workers Welfare Administration (OWWA) to teach cooking skills to would-be overseas Filipino workers (OFWs).

“We train a lot of OFWs who wind up cooking on cruise ships,” says Fajardo, adding that when she went on a cruise, Filipino employees on board proudly told her that they had studied at The Maya Kitchen.

Current food trends always find a place in the curriculum. Japanese cooking had its moment, but this year, baking cupcakes is all the rage.

The Maya Cookfest, a culinary competition in the late 1970s with culinary icon Nora Daza, steered the company in another direction. “People would send in their recipes, and join the weekly and monthly competitions, until they got to the grand finals,” Fajardo recalls.

She adds: “The best thing that set the Cookfest apart from all other cooking competitions was that the winners got to go abroad with Nora Daza to promote Filipino cuisine.”  Called the Philippine Culinary Exchange Program, it had Filipinos strutting their stuff in, say, Bangkok, in front of Thai chefs who, in return, would show their visitors how to cook their native dishes.

In 1978, Maya gathered the winning recipes in a book called “The Best of the Maya Cookfest,” published by Books for Pleasure. “People were interested in the winning recipes,” Fajardo says of the book. The Maya Kitchen released three editions of the “Maya Cookfest” books until Anvil Publishing, Inc. came into the picture in 1990.

“The Maya Kitchen was one of the first authors of Anvil,” explains Gwenn Galvez, Anvil marketing manager. The Maya Kitchen and Anvil have published 30 books together, everything from 1991’s “The Complete Guide to Baking” to 2013’s “50 Best Baking Recipes.”

So what makes The Maya Kitchen cookbooks so popular?  “Their recipes are easy to follow, use local ingredients and are reliable. Plus, they have a strong brand built through their cooking school,” Galvez explains.

It helps as well that the books are immensely practical and yields consistent results, as every recipe has been thoroughly kitchen-tested before they are published.

“You try it and you taste it,” she adds. “The ingredients should be fresh and the quantity precise, especially in baking. If you managed to prepare it, everybody should be able to do it as well.” The most important thing, Subida says, is that the recipes have to be easy to follow. Fajardo says recipes are kitchen-tested from one to ten times until they’re sure that they got it right.

Says Subida: “We start from the kitchen. We introduce the recipes there. Then you become experts. You correct mistakes and you adjust. Once (the recipe is) perfect, you’re done and it’s time to put it in the book.”

Fajardo says it helps if there is an authority behind specific cookbook such as when The Maya Kitchen tapped Japanese chef Seiji Kamura (of his namesake Seiji Japanese Restaurant in San Lorenzo) for the cookbook, “Secrets of Japanese Cooking.”

Along the way, they wind up discovering new recipes and new ways of doing things. Subida explains, as an example, how The Maya Kitchen recently dealt with the sensational new cake flavor, red velvet. “It was relatively new in the Philippines, so we went around and tasted the flavor. Then we were able to discover two ways of doing it. You compare and ask: When and where will you use which recipe? Is it for the home or institutional?”

The Maya team (usually composed of eight people, including Fajardo, the company’s treasurer, and her husband Ernesto, Maya’s president) painstakingly goes over each line of each recipe, says Subida. “I edit the recipes, but we have a standard and the team knows how we are supposed to write our instructions. The sequence is very important. In some cookbooks, the last ingredient listed is the first one to be used. It shouldn’t be like that!”  The team must also bear in mind what their readers have on hand. One example is the common use of grams in measuring baking ingredients to be more precise, cites Subida. But for home cooks, cups are a more common measure. “Not all households have weighing scales,” she explains.

It is The Maya Kitchen that first conceptualizes the cookbook, and the ideas get thrown around when the team meets with Anvil. Once the cookbook is approved for production, the Kitchen tests the recipes. Then it’s back to Anvil for the book’s design and production.

The time-table for producing a cookbook varies, “depending on what materials are available at the time,” says Galvez. “If the recipes are complete and have all been kitchen-tested, it can take a mere three months.”

Because 2013 is the 50th anniversary of the Maya brand, The Maya Kitchen and Anvil are putting together a special book for the occasion. “It’s still in the works because we keep thinking of things to add to it,” says Fajardo, who adds that the book must be out early next year.

That legacy continues to be burnished today in Maya’s sparkling classrooms where instructors like Subida continue to train the cooks and chefs of tomorrow. Reading books is fine, but nothing beats experience, she says. “You cannot feel the dough just by looking,” she adds.

Among The Maya Kitchen’s instructors is Marianne Reyes, who says her favorite students are the household help sent to pick up skills for their employers’ kitchens. “They are the most appreciative and attentive,” she notes.

These days, more Filipinos than ever can be found in the kitchen. “Everyone wants to cook. Husbands and wives both want to cook now,” says Subida, which might explain why The Maya Kitchen remains a byword in Filipino households, not just for the baking mixes or the cooking school, but also for the cookbooks that make budding chefs out of readers, and readers out of chefs. •

Filipinos certainly love their cookbooks. From all-time, long-time favorites to new titles, cookbooks are a steady seller in local bookstores.

But it should come as no surprise that the bestselling Filipino cookbook of all time is “Let’s Cook with Nora,” by the iconic Nora Daza, who passed away last September at age 84. The book has been in print since 1969 and is considered part of her legacy to Philippine culinary arts.

Says Anvil Publishing’s marketing manager Gwenn Galvez: “Cookbook buyers are inveterate collectors. They tend to collect recipes books so they can constantly experiment with dishes. Pinoys, on the other hand, collect cookbooks because they love food. Food is always a good way to connect with others.”

4. “Flavors of the Philippines: A Culinary Guide to the Best of the Islands” by Glenda Barretto (Fountain Press, 1998)

Among the popular cookbooks are those written by Filipinos but published abroad. Here are the chart-toppers:

1. “From Our Table to Yours,” by Angelo Comsti (Marshall Cavendish International Asia PTE Ltd., 2013)

4. “The Adobo Road Cookbook: A Filipino Food Journey—From Food Blog, to Food Truck, and Beyond” by Marvin Gapultos (Tuttle Publishing, 2013)